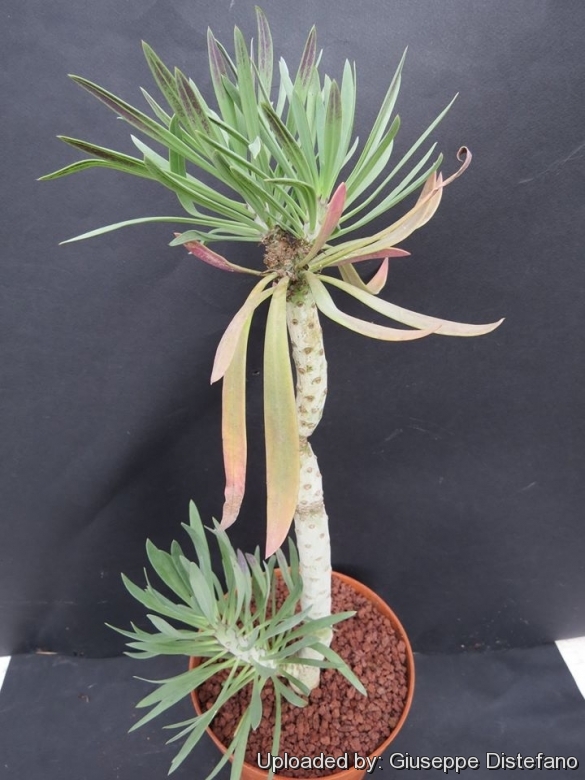 Origin and Habitat: Canary Islands.
Altitude: At around 50-1000 meters above sea level.
Habitat: Senecio keinia is a common succulent in semiarid to arid habitats throughout the islands of the Canarian archipelago. It is the only succulent Senecio to be found in the Islands. It is usually tufted with Euphorbia canariensis and Euphorbis piscatoria on the rocky slopes and ravines towards the sea. This coastal vegetation can be compared with that of the arid areas of Sudan, Ethiopia, Arabia and Iran and is typical of the steppe in the African continent.

Description: Senecio kleinia is a very popular plant widely grown as Kleinia neriifolia. It has the habit of a miniature dragon tree (Dracena draco) with forked branches having tufts of blue-green leaves. Although eventually reaching a height of several metres, moderate sized specimens of this species may be produced in pots. The long leaves often resemble those of oleander, but can also be narrower. The broad-leaved variant from Lanza-rote and Gomera has been treated Kleinia neriifolia f. ovalifolia G.Kunkel.
Habit: It is a deciduous stem-succulents shrub growing upright, richly and irregularly branched 2-3 m hight or even more with soft round stems forking or in whorls.
Branches: Thick and fleshy, jointed, constricted and looking like rows of sausages and branching after the flowering time. The old trunk and branches in age assume a thickness of about 10-25 cm in diameter or more at base. The joints are fleshy but brittle, 7-40 cm long, (1-) 2,5 (-4) cm in diameter, glabrous, pale green, greyish-green or glaucous, usually flushed or striped in purple and covered in pale leaf-scars.
Leaves: Linear to oblanceolate, sessile, clustered in crowded rosettes at the tops of the branches, 9-15 cm long and (0,3)1-2(-3) cm broad, softly fleshy, grey-green above, purple below, with a prominent midrib. Deciduous, the leaves fall at the beginning of the dry season.
Inflorescence: Terminal. Peduncle approx. 6 cm long, forming a compact corymb. Capitula (heads) many (5-6 or more), about 1 cm in diameter overall. Small, yellowish white, without rays, faintly scented and not so attractive.
Blooming season: The flowering period begins at the end of the dry period, mostly in autumn ( August to October). But it can also blooms at any time between March and November given the right conditions.
Fruit: The fruit called achenes (or cypselas) have a conspicuous feathery pappus attached that functions as a "parachute" which enables the seed to be carried by the wind.
Chromosome number: 2n = 20.

Subspecies, varieties, forms and cultivars of plants belonging to the Senecio kleinia group

Cultivation and Propagation: Senecio kleinia is a winter-grower succulent that makes great potted specimens.
Soil: They grow well in a rich, well drained soil such us pumice, lava grit, and only a little peat or leaf-mould.
Growth rate: Slow to moderate growth rate.
Repotting: If potted, repot them preferably in the spring, if their roots become cramped. Generally, they should be repotted every other year in order to provide fresh soil. However, this doesn't necessarily mean they'll need larger containers. Fill about a quarter of the pot with broken crocks, gravel, etc. to promote good drainage. After repotting, do not water for a week or more. Use pot with good drainage. Eventually, as the plant becomes mature grow it slowly, and adopt a new repotting period, using intervals of every 2 - 3 years. Additionally grow it under drier conditions or with stronger sunlight.
Watering: Water sparingly from March until October so long as the plant pot is allowed to drain and not sit in a tray of water (It rots easily, especially if over wet), and also needs to be avoided wetting the body of this plant while it is in sunlight. Let dry between watering. From July watering should be reduced to force the plant to go into a state of semi dormancy, by September onward the plant will begin to grow and watering should be increased gradually until late November when the plant should be in full growth.
Fertilization: Low food needs. Feeding may not be necessary at all if the compost is fresh then, feed in early autumn only if the plant hasn't been repotted recently. Do not feed the plants from September onward as this can cause lush growth which can be fatal during the darker cold months.
Hardiness: When dormant, the plant is slightly cold tolerant (down to nearly -5° C or less), but when left out it is more sensitive to frost. However warmth throughout the year will increase the grower's success (at minimum temperatures from 5 to 15 centigrade degrees during winter). During the summer it is best to keep the plants outside where the temperature can rise to over 30 C with no harm to the plant.
Exposure: They do need a lot of light to develop their typical compact shape, but different clones vary in their tolerance of full sunshine. However some protection in light shade is recommended during the hottest hours in summer. They can tolerate moderate shade, and a plant that has been growing in shade should be slowly hardened off before placing it in full sun as the plant will be severely scorched if moved too suddenly from shade into sun. If kept too dark they may become overly lush and greener and could be prone to rotting due to over watering.
Uses: It is suitable for small “desert” gardens, in association with other xerophytes. The plant's form and texture are compatible with other succulents and cacti. Where the open air cultivation is not possible due to the climate, it is to be cultivated in pot in order to shelter it in winter.
Diseases and pests: Watch for infestations of mealybugs, scale insects and spider mite. Rot is only a minor problem with cacti if the plants are watered and “aired” correctly. If they are not, fungicides won't help all that much.
Propagation: It is easy from seed in spring but less so from cuttings. Cuttings grow easily once left to callous for several days and then planted in succulent soil. Seeds germinate in 14-21 days at 21°C.