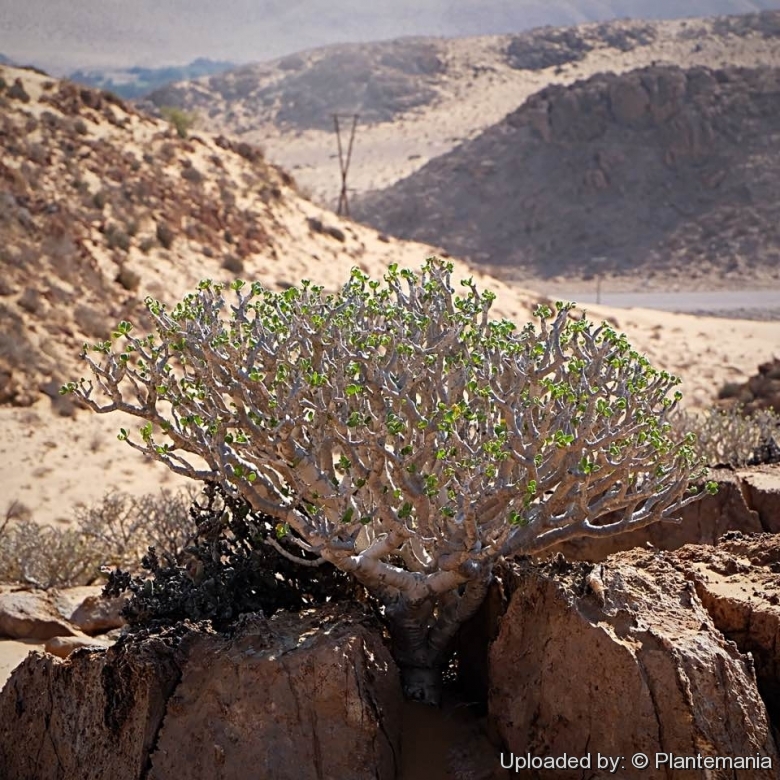 Origin and Habitat: Othonna furcata is a common sight in the coastal parts of the southern Namib. lt occurs from about Spencer Bay southwards into the Northern Cape, in South Africa.
Habitat and ecology: The southern Namib is largely an area of shifting sand dunes of up to 300 m high and largely devoid of vegetation. O. furcata is one of the few plants that thrives on mobile sand dunes where the sand deposition could enhance the growth of this species, which is adapted to desert conditions. O. furcata lose their leaves in summer so that most of the sand tends to pass through rather than accumulate around them, however, with time, around the plants may form hummocks (small sand knoll or mound above ground). The stem and woody branches of O. furcata will produce new buds at a higher position on the stem, thereby efficiently staying on top of the sand and producing an increased cover. These stabilised hummocks also provide habitat for rare and endangered species such as the Namaqua dwarf adder (Bitis schneideri) and the desert rain frog (Breviceps macropsy). This species is also found on rocky outcrops and occasionally on gravel plains; Pelargonium spp, Salsola spp., Lycium decumbens, Drosanthemum luederitzii, Jensenobotrya lossowiana and Osteospermum crassifolium can locally be encountered. Away from the coast the plant community becomes even sparser, occupying much less than 1% of the surface overall; where rock outcrops occur, however, the 'fog desert' communities including O. furcata and Pelargonium spp may be found. The seeds of O. furcata are dispersed by the wind. There are various Othonna species in Namibia, but only Othonna lasiocarpa looks very similar. It occurs further inland [2,3,4,7,8,9,10].

Description: Othonna furcata is low-growing, bonsai-like, open-branched succulent-shrub to 50(-80) cm tall with a trunk to 6 cm in diameter. This small shrub is easily recognised by the typical growth form and smooth shiny, almost white stem. The leaves are clustered at the top of the branches and are slightly succulent.. From its leaves and stems, an oily resinous substance is exuded which smells like myrrh. When the lower leaves and branches are walked upon, the fragrance released scents the air around and is especially pronounced at nightfall [6]. Yellow flowers are borne on stalks on the top of branches.
Branches: The branches are produced at a higher position on the stem (away from the base), they are forked or whorled, and thick. They form a dome-like crown with shiny, silvery- white bark.
Leaves: The leaves are clustered at stem tips. They are flat, 2.5-4 cm long, 1.2-2 cm wide, grass green, obovate, tapered at the base, obtuse or retuse at apex.
Inflorescences. The inflorescences are terminal, several at each branche tip.
Flowers (capitula): The capitula are numerous, only 6 mm in diameter. They have 5 phyllaries. The ray florets are absent. The disc florets are yellow.
Fruits: Glabrous [1].

Cultivation and Propagation: Othonna furcata are not very difficult to grow as potted specimens.