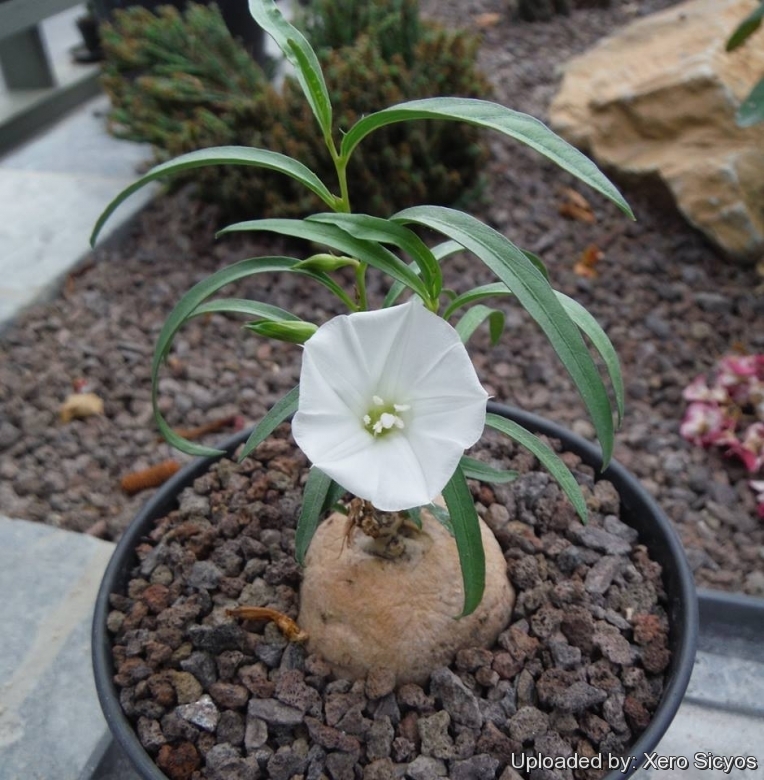 Origin and Habitat: Ipomoea simplex is endemic to the central and eastern parts of southern Africa (Eastern Cape, Free State, Gauteng, KwaZulu-Natal, Limpopo, Mpumalanga).
Habitat and ecology: This species grows in grasslands and savannas, often on rocky ridges. Flowering time September to April (summer). It grows in localities with sparse and uncertain rainfall, prone to fire in the dry season, harsh winter conditions, in the company of other plants with long taproots, thick tuberous roots and underground woody stems, all adaptations to the demands of their habitat.

Description: Ipornoea simplex is a small, usually unbranched erect, hairless, perennial herb up to 10 cm high, with a tuberous rootstock not unlike those of a potato. The leaves are almost stalkless, long, narrow and tapering. I. simplex is close to both to Ipomoea bolusiana and Ipomoea welwitschii, but can be easily recognised by its smaller, white flowers usually opening 1 at a time, and simple leaves.
Rootstock (caudex): Solitary, globose, obovoid, oblong or fusiform, 4-7(-10) cm long and 2.5(-4) cm in diameter.
Stem: Persistent stems slender, erect, gnarled and rough, usually partly underground (1-9 cm long) woody), producing annually during spring herbaceous above ground branches that are slender, suberect, somewhat angular and furrowed, but feeble and scarcely able to support themselves woody at the base, glabrous, as is every part of the plant. After flowering the annual stems die down nearly to the tuber.
Leaves: Alternate, usually close together, 3-10 cm long, 1-1.2 cm wide, linear or linear-lanceolate, frequently recurved, entire, or sometimes with a few pinnately arranged lobes to 1.5 cm long, 1-6 mm wide. Blade tapering and almost petioled at the base, cuneate, rounded to shallowly subcordate the margins waved, quite entire. Apex acute to acuminate. Petioles nearly absent.
Flowers: Solitary in leaf axils from the lower part of the stem, handsome, each on a short peduncle, erect, pale cream to almost white. Peduncles less than 6 mm long. Bracteoles variable in size, linear to linear-subulate. Pedicels short. Calyx 12 mm long. Sepals lanceolate or oblong-lanceolate, acute, and at the apex somewhat recurved, sub-equal, inner ones longer, 9-15 mm long. Corolla broadly funnel-shaped, about 2.5-3.5 cm long, 2-2.5 cm in diameter, white, shallowly lobed. Stamens five, inserted at the base of the tube, included, two long, and three short. Filaments subulate, downy at the base, style included. Stigma large, capitate, two-lobed, granulated.
Fruit (capsule): Ball-shaped, glabrous up to 7-9 mm in diameter.
Seeds: Dark brown, 4-5 mm across, with brownish velvety fuzz. 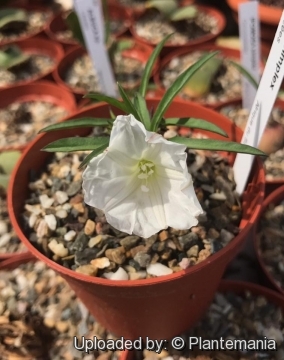 Ipomoea simplex Photo by: © Plantemania
Send a photo of this plant.

Cultivation and Propagation: Ipomoea simplex is a handsome green house plant. It flowers in July and requires only a very small pot and no trellis.
Traditional uses: This species is notable for its large tuber or root, often eaten raw by Xhosa and Sotho herd boys.