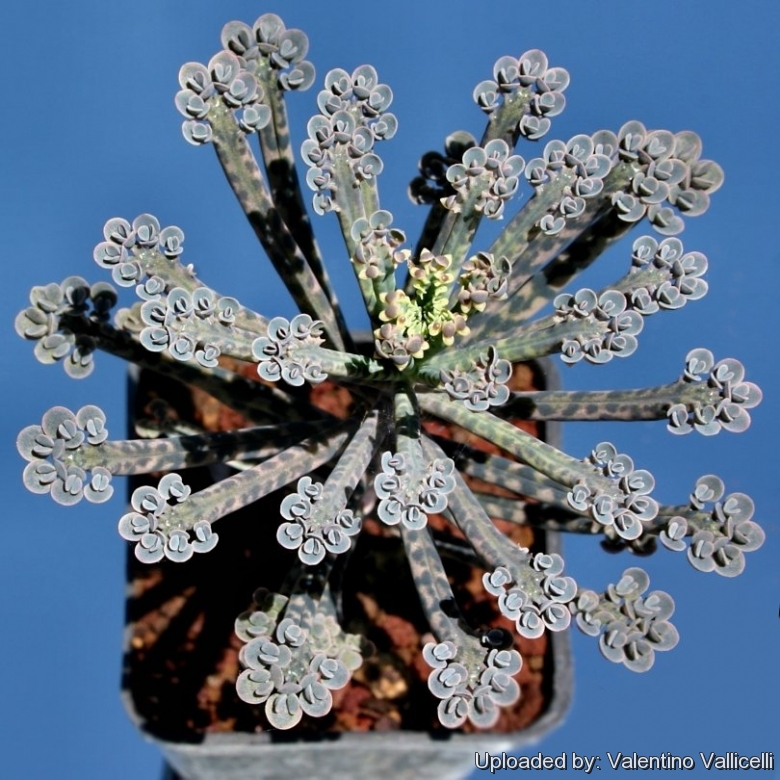 Kalanchoe delagoensis Photo by: Valentino Vallicelli
"Mother of Thousands" This plant gets a lot of attention from visitors for its archetectural accents, its willingness to grow nearly anywhere, and the ease with which the babies can be pulled or scooped away where not wanted. They have to be fairly large to bloom, and a large potful of them in bloom can be spectacular.

Description: The "Mother of Thousands" Kalanchoe delagoensis (Sym: Kalanchoe tubiflora) is a peculiar succulent species that reproduces via "plantlets" that grow on the ends of each leaf & drop off.... they fall into the dirt and grow from there. They grow everywhere, don't need dirt, they grow, among the spines of cacti, in orchid bark, between the leaves of bromeliads, in leaf litter on a cement patio, as well as in every pot within 15 m of the mother plant. Good thing they don't have nasty roots- they pull up out of the ground easily. The plant's capability for vegetative reproduction, its resistance to drought, and its popularity as a garden plant, have allowed the plant to become an invasive weed in places such as eastern Australia and many Pacific islands. In optimal conditions it grows as an annual/biannual and typically grows to about 1 m before blooming in the winter. Plants die back after blooming and new shoots can arise from the roots. Some similar plants that also produce an abundance of plantlets include Kalanchoe pinnata and Kalancboe daigremontiana. These are fun plants for kids to have and experiment with and provide a good lesson in plant propagation.
Leaves: Waxy with a rubber/plastic appearance, mottled with violet-brown leopard spots and frilled with plantlets, the leaves ray out in a snowflake shape from an upright central stem. Leaf width varies a lot, with plants in moist shade having wider, flat leaves and those in dry sand having the narrowest and most "tubular" leaves. The margins is entire except at their apices where there are five to seven teeth.
Flowers: Produces umbels of trumpet-shaped 2-3 cm long salmon to scarlet flowers that dangle in clusters from the top of the plant. They are very beautiful but hard to see.
Blooming season: Due to intense vegetative reproduction, this plant rarely blooms. But well grown larger specimens can flower profusely in winter, even with little or no water. The flowers last about 5 weeks so it is well worthwhile trying to get some.
Chromosome number: 2n = 68. 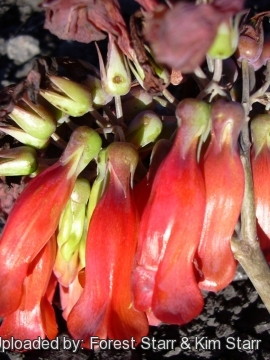 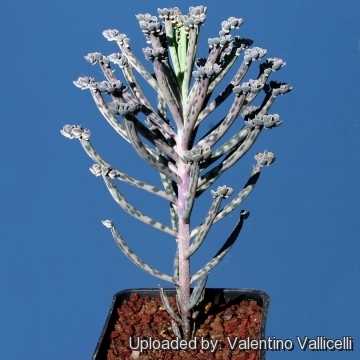 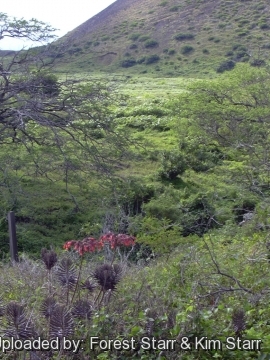 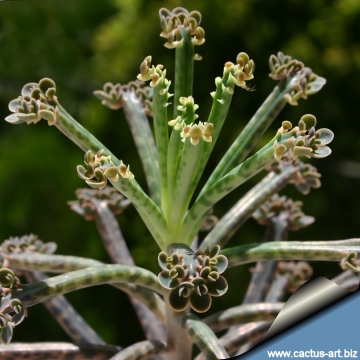 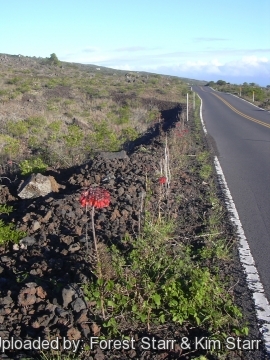 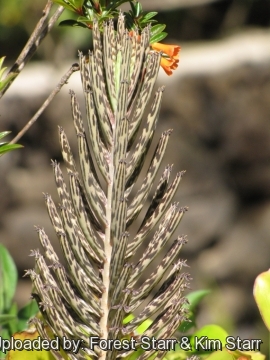 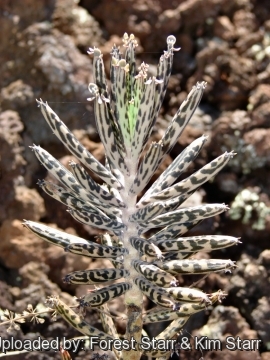 Cultivation and Propagation: This plant is almost indestructible, does not require any care... no care at all, it will grow. Sure it like water, but it is very drought tolerant... ... throw it on the trash piles and it just keeps growing and flowering.
Kalankoe delagoensis isn't hardy to severe freeze, but seem to tolerate everything else. Be careful with this species in outdoor culture, once it gets into a planting bed it is almost impossible to get rid of it, a few tiny plantlets seem to survive any attempt to weeding them out every time, and then they reproduce like crazy again.
These are very easy pot plants due to their drought tolerance, and in fact will grow in pretty deep shade without much trouble. Good thing they don't have nasty roots- they can be pulled or scooped away where not wanted. It need to be covered at least and housed in cold climates.
They are absolutely gorgeous as a cut flower in a tall stemmed green vase. However the flowers are produced only by healthy plants grown on optimal conditions:
1. It is best to grow them outside over the summer in an oversized pot so they grow large quickly with the extra fertilizing.
2. Repot them in Autumn and left outside in a bright but cool and dry location until first frost.
3. The cool temperature along with the shorter days at the back of the Solarium where the light levels are relatively low stimulate the production of abundant flower buds.
Propagation: This succulent produces its offspring at the tips of its tubular leaves but every part of it will root and grow new plants.
Warning: Parts of Kalankoe delagoensis is toxic, it contains a cardiac glycoside – daigremontianin. All members of Kalanchoe are toxic for livestock, birds, small animals and humans.