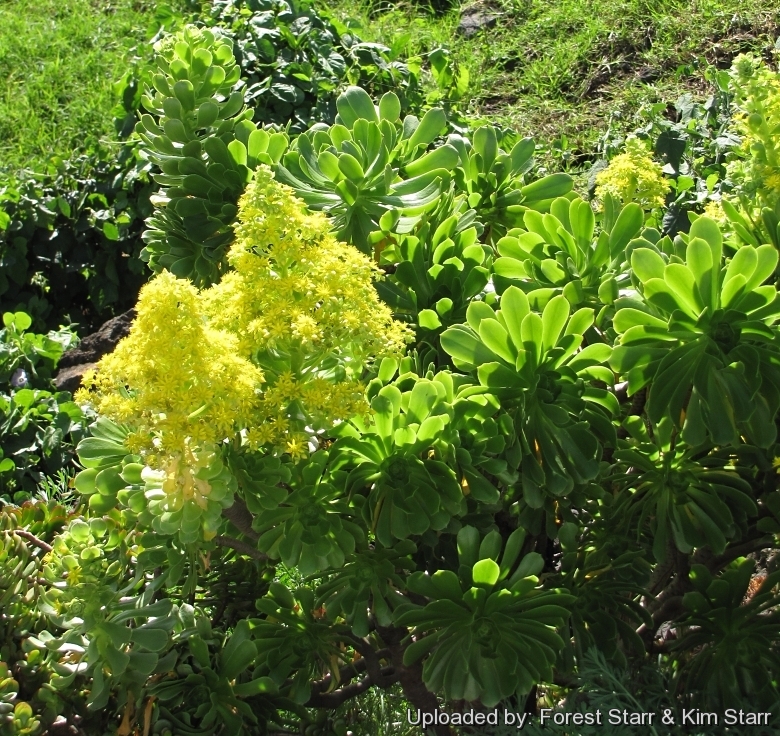 Origin and Habitat: Aeonium arboreum is native to Atlantic Islands (Canary Islands [Gran Canaria]) and northern Africa ( west coast of Morocco), but grown throughout the Mediterranean region during classical antiquity. The tetraploid race of var. arboreum is widely grown in areas of Mediterranean climate, including California and often persisting from cultivation.
Altitude: It usually grow at altitudes below 100 metres above sea level.
Habitat and ecology: It covers the rocks, bluffs and dunes bordering the Mediterranean sea with its bright dense masses.

Description: The tree houseleek, Aeonium arboreum var. arboreum, is a rather open subshrub 1(2) metres tall, without prop roots. It bears flat rosettes of leaves and large pyramidal panicles of bright yellow flowers in the spring. Each rosette that bloom will die. The purple cultivar, Aeonium arboreum var. atropurpureum cv. Schwarzkopf (Zwartkop), with rosettes of deep blackish-purple leaves is more commonly found in cultivation than the natural green species. There is also a white variety (Aeonium arboreum var. albovariegatum).
Stems: Few- or heavily-branched, robust, fleshy, 10-40 mm in diameter, bark fairly smooth with distinct leaf scars.
Rosettes: Dense, concave or flat, 10-20 cm in diameter, with 50-75 tightly compressed leaves. The leaf rosettes are arranged at the ends of its branches.
Leaves: 5-9(15) cm long, 1.5-3 mm thick, oblong-oblanceolate, rounded above, apiculate, firm, green or brown-purple, more or less shiny, with white pectinate-ciliate, hairs along the edges. Surfaces glabrous.
Inflorescences (cymes): Dense, conic to ovoid 10-20 cm long, peduncles long, glabrous, ascending puberulent. Flowers stems emerge from the center of the rosettes.
Flowers: Star-like, bisexual, ± 2 cm wide, rotate; sepals 2-3.5 mm long, 1.1-1.4 mm wide; petals 9-11 narrow-oblong to lanceolate, spreading, 5-7 mm long, 1.5-2 mm wide, yellow, pedicel and calyx puberulent. Filaments dilated at the base, united above in a tube with the petals; anthers roundish-ovate. Carpels glabrous, erect, immersed at the base in the calyx-tube.
Blooming season: Autumn to spring (Oct-Apr in habitat). Aeonium arboreum is a monocarpic species, meaning that it dies after flowering. Although their yellow flowers are attractive, each time they bloom, a rosette dies.
Chromosome: 2n- [36],72. 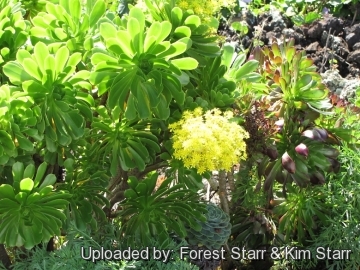 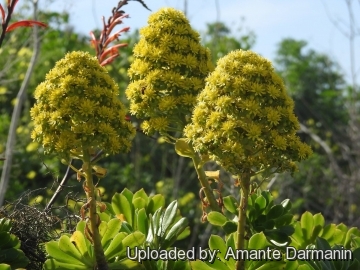 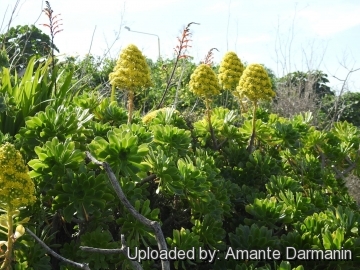 This species, although alien, seems to be slowly spreading here and there in Malta. (Aeonium arboreum) Photo by: Amante Darmanin 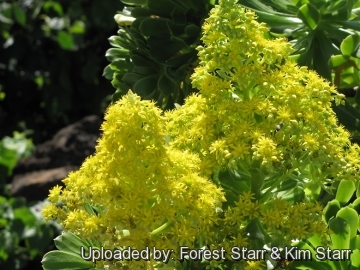 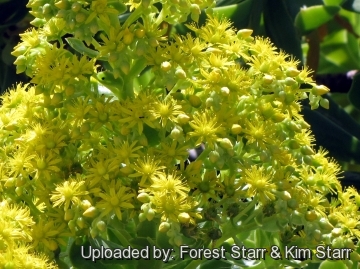 Cultivation and Propagation: Aeonium arboreum makes a great medium height succulent shrub and makes a very ornamental green mass with bright yellow flower heads in full sun in warm climates.
Soil: It requires a very free draining enriched soil, mildly acidic to mildly alkaline but is very tolerant of poor soils. For pot culture it requires a gritty well drained potting mix.
watering: Water deeply but infrequently. Plants are allowed to thoroughly dry in-between waterings. During the winter months restrict water to about once a month, or just enough to keep the foliage from shrivelling.
Exposition: Position it in full to part sun in a sheltered spot, but the bright light enhances the rich hues of the darker Aeoniums, and the subtle blushes of the other colours, but prefers light shade to shade in summer, but thrives also in hot sunny positions and will tolerate coastal conditions. The plants tend to go dormant in the summer and look a little tired sometimes, but they perk up again in the fall. Summer is the natural dormant season for this species in its native land.
Hardiness: It needs protection from severe winter frosts (Hardy to -2°C or a little less for short periods) in these situations it will better resist if sheltered by the winter rains, seen that the humidity and low temperatures render it more sensitive to rottenness. Plants in containers however, suffered major leaf loss. USDA Zone 9b to 12. Over winter under glass in all but the mildest of gardens.
Wind and salt tolerance: Tolerates well high wind and second line salt wind.
Maintenance: The dry flower stems need to be removed to keep a tidy appearance. These species do tend to get sort of leggy, which is particularly a problem if grown as a potted plant, and trimming back is often necessary. Cut back in late summer. Because the rosettes grow at the ends of the stems, it becomes lanky unless made to branch.
Propagation: Aeonium arboreum is easily propagated by cuttings in the spring. When the stem becomes too tall, just cut the top rosette with a piece of stem and plant it. It will soon take root, while the plant left with just the stem will soon grow new buds that can be in turn used for propagation. Time to take cuttings: April to July. Once established this pant provides a source of cuttings to give away or to fill gaps in the garden.
Use: Aeoniums make excellent summer bedding plants, since their architectural shape contrasts well with most other bedding plants. They can also be used effectively planted in containers.