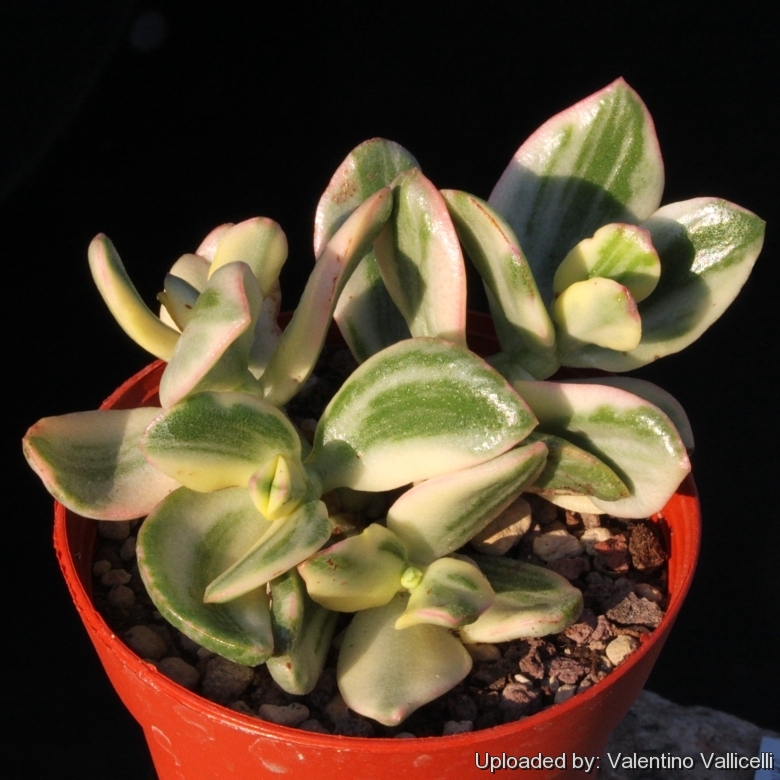 Origin and Habitat: Garden origin (Nursery produced cultivar). The original natural habitat of this species is the eastern Cape in South Africa, also in KwaZulu-Natal and Mozambique.

Description: Crassula ovata cv. Lemon & Lime (Variegated Jade Plant) is a spectacular slow growing cultivar close in appearance to the common jade plant but with shiny cream stripes on spoon-shaped leaves. Just as its all green cousin it is a many-branching succulent shrub with a stout trunk up to 120-180 cm tall. It bears pale-green, obovate pointed leaves that are streaked with a white variegation. New growth sometimes has a hint of pink over the white. Like most variegated plants, it is a slow grower. This form is sometimes called 'Tricolor' because of the tinge of pink on the new growth.
Habit: It forms an upright, bonsai-like plant that at maturity grows up to 100-120(-250) cm.
Stems: The segmented branches may be brown or grey-green in colour
Leaves: 2,5-5 cm long spatulate, oblong, thick, fleshy, light green with broad, creamy-white stripes, except for that occasional leaf that is completely white or cream colored. Leaves are often tipped with a pink margin on the new growth and when grown in the sun.
Flowers: Small pink or white, star-shaped in apical clusters 5 to 7 cm across within the foliage.
Blooming season: Late autumn/early winter and bloom for many weeks.qua'

Subspecies, varieties, forms and cultivars of plants belonging to the Crassula ovata group 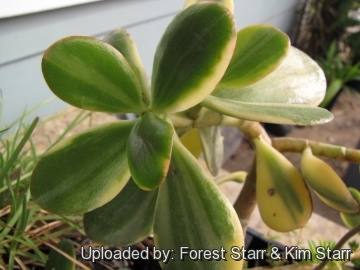 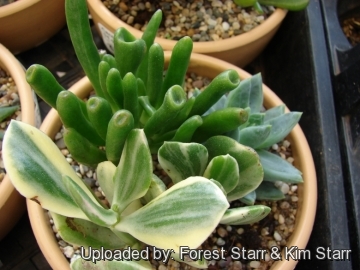 Cultivation and Propagation: Crassula ovata cv. Lemon & Lime is a relatively commonly sold plant at garden outlet nurseries, and can make a nice low succulent shrublet in the garden, does well in containers, and makes a good houseplant. It is widely grown and not difficult to cultivate. They thrive with bright light and ample airflow. Tolerates very dry conditions but looks best with occasional water.
Growth rate: Moderately fast.
Soil: It grows best in sandy-gritty soil. Good drainage is very important as it is prone to root rot.
Fertilization: Feed it once or twice during the growing season with a fertilizer specifically formulated for cactus and succulents (poor in nitrogen), including all micro nutrients and trace elements diluted to ½ the strength recommended on the label.
Watering Needs: It is a very dry-tolerant plant. Water regularly in the growing season, but avoid water-logging and let dry between waterings. Water with caution in winter, as the plant can lose its roots if the soil stays cold and wet for extended periods. If grown in a container, bottom watering by immersing the container is recommended. It must have very dry atmosphere.
Sun Exposure: Does well in filtered sun, but can handle some shade, too. In shade the leaves colour will remain more green, while in harsh full sun conditions the foliage can develop a pinkish tinge. In summer keep cool and provide some shelter from direct sun during the hottest hours. It can be sunburned if moved from shade/greenhouse into full sun too quickly. It tends to get leggy in deep shade.
Frost Tolerance: Protect from frost to prevent scarring. It requires a minimum temperature of about 5°C, but will take a light frost and is hardy down to -5° C for short periods if it is in dry soil (Lethal temperature in habitat -6 to -10 ° Celsius). USDA zones 9A – 11. In areas prone to frost, grow in an intermediate greenhouse or conservatory, in pots.
Uses: They make wonderful rocker plants in hot, dry areas and also grow well in containers or sunny patios or in a hot corner next to a swimming pool.
Pests and diseases: May be susceptible to mealybugs and rarely scale. Protect from cold.
Propagation: From seed but it is easily increased by cuttings. Cuttings root easily. It is also possible, to plant the leaves in good, sandy soil where they will take root - members of this family often propagate vegetatively in this way.