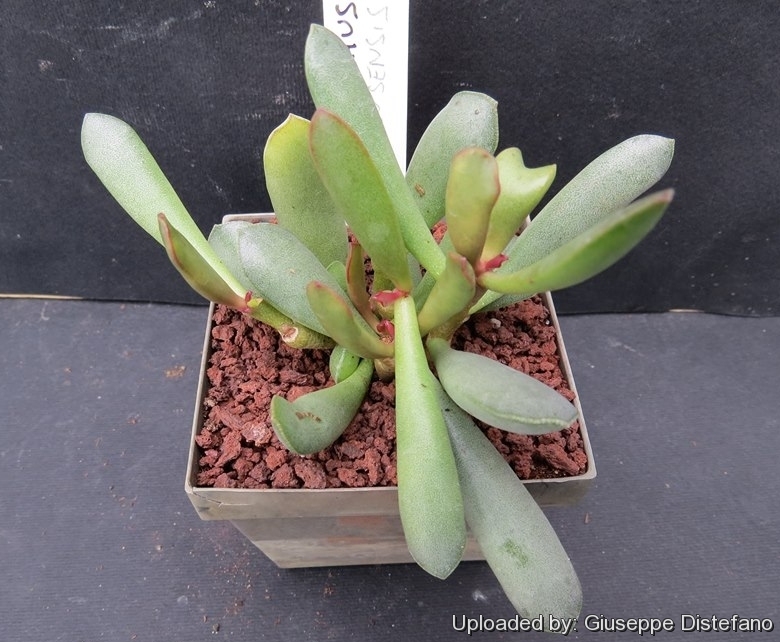 Origin and Habitat: Adromischus halesowensis is endemic to Halesowen, near Cradock, Eastern Cape, Republic of South Africa. This species has long been represented in cultivation by what is probably a single clone. Visitors to Halesowen report that Adromischus cooperi is common there, but so far no one has seen A. halesowensis again since its first description. Land use in the area has changed significantly since 1931, where it may now have become extinct.

Description: Adromischus halesowensis is an elegant dwarf perennial succulent plant known only from one clone in cultivation, forming a compact clusters of terete to narrow cuneate, pale silver-green leaves very lightly spotted, with a small, pointed, horny margin at the tip. In all parts glabrous. It is also easily distinguished from Adromischus cooperi by the glaucous, purple peduncle and red-brown corolla.
Derivation of specific name: The specific name commemorates its only known locality at Halesowen, near Cradock, in the Eastern Cape.
Stems: Spreading, sparsely branched, elongated, ascending closely leafy above the base, prolonged into an erect flower-stalk ending in a few flowered inflorescence.
Leaves: Up 5-7 cm long, below the tip-area to 15-25 mm wide, 12 mm thick, alternate, from base to tip gradually widened, a little teretely narrowed below, from base to centre subterete, from here to tip gradually or on the backside very convex, on the upper side less convex, a little pruinose, glossy, with waxy points towards the tip with small brownish-green or dark green markings, tip-area widely triangular roundish or widely triangular, margins sharpened and horny.
Inflorescence: Flower-scape simple.
Flowers: Solitary or even to 4, 10-l2 mm long, green-red-brown.
Taxonomy: The name Adromischus halesowensis was published as a replacement name for a taxon described in 1940 by Karl von Poellnitz under the illegitimate name Adromischus cuneatus. That was a later homonym of Adromischus cuneatus (Thunb.) Lem. (1852), a synonym of Cotyledon cuneata. Tölken, in contribution on the "Crassulaceae to the Flora of southern Africa", referred this species to Adromischus cooperi, from which it differs not only in its habit of growth but in its very different inflorescence, so some authors consider it a separated good species.

Cultivation and Propagation: Adromischus halesowensis is a fairly easy succulent to grow and one of the easier Adromischus species.
Growth rate: It is a popular, fast growing species.
Soil: It prefer well-drained soil.
Repotting: Repot every other years. All species of this genus are happy in small pots.
Exposure: It grows best in a partially shaded position. It got sunburned if exposed to midday sun.
Hardiness: Require a minimum temperature 5°C (But hardy down to -7°C for short periods), with good drainage and dryness in winter to resist the cold.
Watering: It takes more water than cacti, but let the soil dry between soaking, in the wild, it receives rain mostly in spring and fall. Must have very dry atmosphere. Water less in winter but do not allow it to shrivel.
Pest & disease: It is vulnerable to mealybugs and rarely scale. It is prone to rotting from the tuberous base or from dried inflorescences.
Maintenance: As the plant matures, the centre becomes bare. When it does, restart it from side cuttings and throw away the central part.
Propagation: Usually propagate from single leaves (leaf cuttings) or stem cuttings. Leaves easily root and produce new plants. Twist off a leaf and permit it to dry out a couple of days, lay it on the soil and insert the stem end partially into the soil. The original leaf should not be removed until it has dried up. Try to keep the leaf somewhat upright so that the roots are able to grow downward. If grown in a container, bottom watering by immersing the container is recommended.