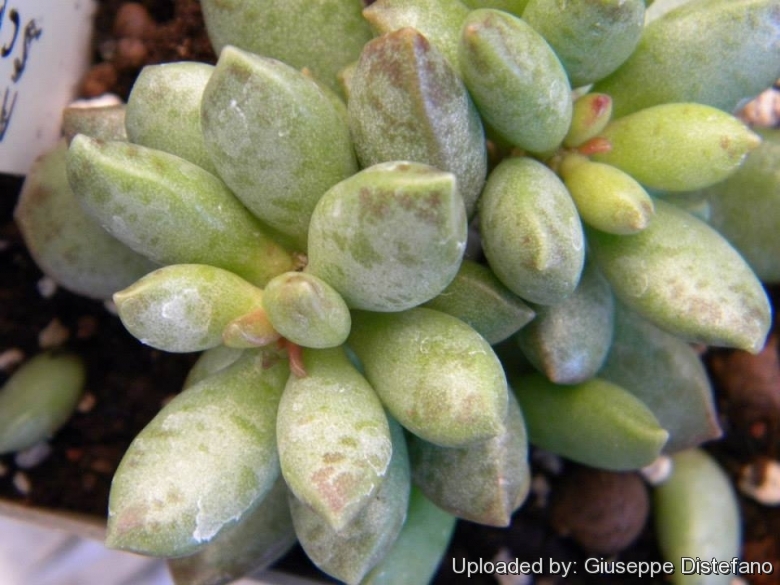 Description: Adromischus schuldtianus subsp juttae is a much branched dwarf shrub, up to 10 cm high building a branched tuberous base (caudex). It usually does develop branches longer than those of subsp. schuldtianus. Leaves green, a little glossy, with numerous waxy dots. It is little known subspecies that is, according to Tolken, known only from a few plants.
Stem: Short, at first erect, tapering, basally tuberose up to 4 cm or more, with grey rind, distal parts 8-10 mm. Younger leave bearing branches 5-7 mm in diameter.
Branches: Short erect up to 80 mm long.
Rottstock (Caudex): Very thickened.
Roots: Fibrous.
Leaves: Alternate, green, a little glossy, with numerous waxy dots. Older leaves covered with waxy coating, spatulate- or obovate-wedge-shaped or obovate-elongate or elongate, mostly narrowed into a stalk, triangular or ovate-triangular above, pointed, with a little apiculus, rarely rounded, on the upper surface a little convex, more rarely flat, on the back side in the middle convex, flat towards the tip, margin rounded below, towards the tip sharp, , young L. sometimes with a horny margin, older Leaves spreading, young Leaves erect, 2.5-4 cm. long, 1-2 cm. wide, 3-8 mm. thick, gaps in the waxy layer of young Leaves variously large, roundish or elongate, therefore the Leaves flecked.
Inflorescence: Spike-like thyrse with 1-flowered cymes, a 20 to 30 cm tall, grey-green to almost white; pedicels 3-5(-12) mm long. Peduncle 3-12 mm long. Flowers to 6-12.
Flowers: Flowers 8-13 mm long, green to red- brown. Buds cylindrical and more or less grooved longitudinally, gradually tapering towards apex, erect and at first adpressed to axis.

Subspecies, varieties, forms and cultivars of plants belonging to the Adromischus schuldtianus group 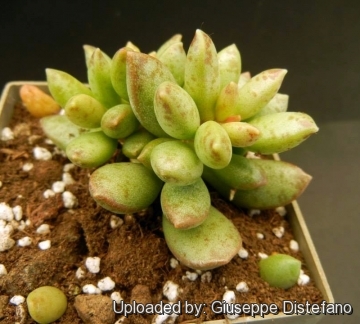 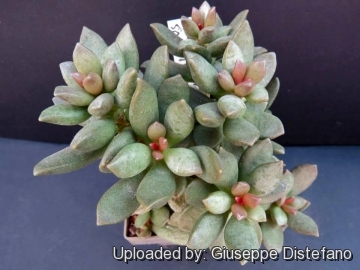 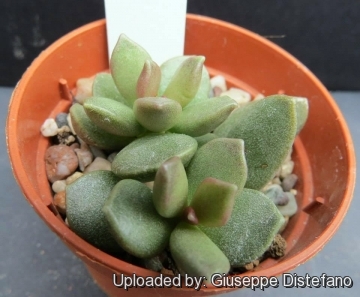 Cultivation and Propagation: Adromischus schuldtianus subs. juttae is a most beautiful succulent but not the easiest species to cultivate, and prone to rotting off, both at the height of winter or summer.
Growth rate: It is a relatively fast growing species.
Soil: Use mineral well-permeable substratum with very little organic matter (peat, humus). It needs perfect drainage to flourish.
Repotting: Repotting every 2-3 years. As it is especially prone to rot under-pot in a smaller container filled with very porous compost. Use pot with good drainage. All species of this genus are happy in small pots.
Exposure: It grows best in a partially shaded position. It got sunburned if exposed to midday sun.
Hardiness: Require a minimum temperature 5°C (But hardy down to -7°C for short periods), with good drainage and dryness in winter to resist the cold.
Watering: It takes more water than cacti, but let the soil dry between soaking, in the wild, it receives rain mostly in spring and fall. Must have very dry atmosphere. Water less in winter but do not allow it to shrivel.
Pest & disease: It is vulnerable to mealybugs and rarely scale. It is prone to rotting from the tuberous base or from dried inflorescences. If the plants are not watered and “aired” correctly, fungicides won't help all that much.
Propagation: Adromischus seeds are very small and seed propagation is rarely used. Usually propagate from single leaves (leaf cuttings) or stem cuttings. Leaves easily root and produce new plants. Twist off a leaf and permit it to dry out a couple of days, lay it on the soil and insert the stem end partially into the soil. The original leaf should not be removed until it has dried up. Try to keep the leaf somewhat upright so that the roots are able to grow downward. If grown in a container, bottom watering by immersing the container is recommended.