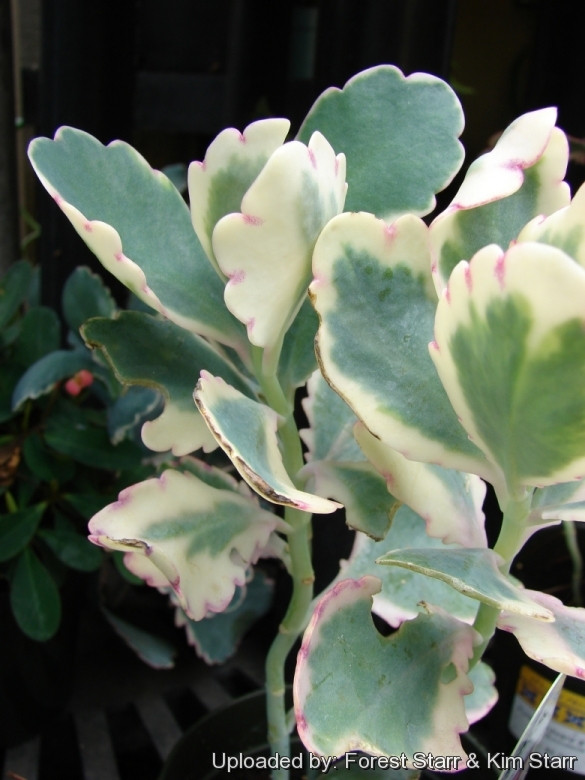 Origin and Habitat: Garden origin. The original natural habitat of this species is central-southern Madagascar.

Description: Kalanchoe fedtschenkoi (Bryophyllum fedtschenkoi) is cultivated in the tropics and as a house plant in the temperate regions. The leaves are coloured metallic green and may turn pink or red under strong sunlight or drought conditions.
Variegated form: The beautiful variegated form (‘variegata’ or ‘marginata’) also called 'Rainbow kalanchoe' is very diffused and appreciated in cultivation. It is an attractive sport from K. fedtschenkoi, distinguished for its more bushy and erect habit and the pale bluish-green leaves that have margins that are creamy white and scalloped instead of toothed also colour red. The leaves bear new plantlets in each leaf notch. The brownish-pink flowers are bell shaped and hang in loose clusters from upright stems in the winter.
Habit: It is a low-growing, untidy, erect to spreading ramified, perennial succulent herb. It is frost-tender, polycarpic and grows to about 40 cm tall and half as wide.
Stems: Non flowering stems round, terete, succulent, 25–30 (or more) cm tall, smooth and lax with visible leaf scars, suberect often bending to touch the ground where they produce roots and a new plant, by the time of blossoming the branch curves upwards rising up to about 40 cm. The flowering branch withers once the fructification is completed, but produces at the base one or two lateral prostrate sterile branches, 8-40 cm long that take root wherever they lie on the ground, also through the emission of robust and rigid aerial roots, which at the end will produce in their turn a flowering branch; in this way, with the time, the plant may remarkably expand.
Leaves: Opposite, evenly spaced, simple, thick and fleshy, glabrous (hairless) oval or obovate (2-)3-5(-10) cm long and 1-3(-8) cm broad , tapering towards the base, waxy, bluish-green or lavender-grey glaucous. Leaf margins edged in cream, scalloped instead of toothed often pink or red, apex obtuse. Petiole terete, 1–6 mm long. Bulbils borne mostly in notches of leaf margins on damaged or fallen leaves.
Inflorescences (Cymes): Terminal corymbiform 15-30 cm tall, to 15 cm in diameter often multi-layered in good conditions, branches to 5 cm long carrying numerous and drooping flowers. Pedicels 5–15 mm long.
Flowers: 2.5-3 cm long tubular-campanulate, nodding, with a short green-yellow violet-flecked calyx (10-)15-18(-20) mm long edged with delta-shaped segments 4–7 mm long, the calyx is shorter than the tubular corolla and inflated. The corolla is a brownish-pink colour formed by a 18-25 mm long tube contracted basally, and four obovate, lobes.5–8 mm long, apex obtuse to rounded.
Fruits: 4 clustered follicles containing numerous tiny seeds.
Phenology: It flowers in winter-spring.
Chromosome number: 2n = 34 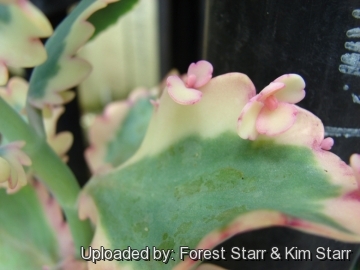 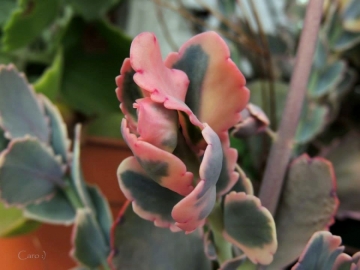 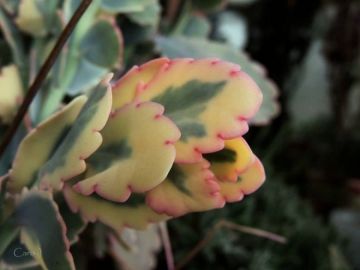