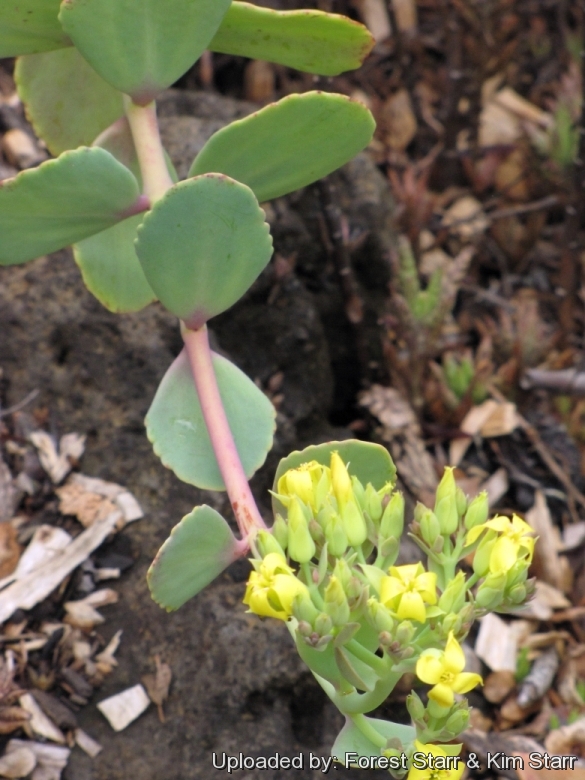 Origin and Habitat: India (Southern Western Ghats, State - Kerala, Districts: Idukki, Wayanad )
Altitude range: It is found at altitudes up to 900 (-2000?) metres.
Habitat: Kalanchoe grandiflora is a succulent under shrub found in foothills among grasses. It is planted in home gardens, but easily it escapes from cultivation and spreads in disturbed places. Naturalized in French Polynesia, Galapagos and invasive in New Zealand.

Description: Kalanchoe grandiflora is a thick-stemmed, succulent herbs almost shrub-like, growing 60(-100) cm high having light turquoise green scalloped leaves that are surfaced with a white powdery waxy coating. The leaves and young stems are often tinged a rose-violet colour. It produces very showy masses of bright yellow scented flowers appearing in spring.
Stem: Stems and lower branches upright 30-60 or more cm tall and 25 mm or more thick, but tapering upwards round and smooth except for the numerous flat leaf-scars.
Leaves: Thick, succulent, simple in opposite pairs, ovate to obovate-obtuse 7 x 3.5 cn, almost flat at the end, narrowed to the base, crenulate, glabrous, light green surfaced with a glaucous powdery waxy coating often with peach tinge. The margins are Entire or broadly crenulate (scalloped). The peach tinge will most likely not be as pronounced in summer as with winter temperatures. Sessile joined round the axis by a smooth ridge, the younger scars showing a row of three to six bundle-scars.
Inflorescences (cymes): Held erect terminally on leafless, 12 cm across corymbose clusters, dividing above repeatedly into three yellowish-green branches, the middle one of which always ends in a flower (very regular threechotomous cymose panicle). Bracts scarious, obovate or elliptic acute. Pedicels 1 cm long expanded under the flower. Flowers closely packed.
Flowers: Four-partite, tubular with yellow. Calyx flask-shaped tubular. Sepals 6 x 3 mm oblong-acute red-streaked. Corolla tube 12 mm long contracted at the top and then spreading in four yellow pointed free lobes (petals) 6 x 4 mm opening outwards, persistent round the fruit. Stamens eight in two series, four at the mouth of the tube between the lobes and very short, four longer, on the base of the lobes; anthers small ovate. Carpels distinct very nearly to the base tapering above to the 4 mm long style with a slender gland or staminode opposite each. Flowers are yellow and give off a most delicious perfume, reminding one of the sweet-scented Honeysuckles of hedgerows (Lonicera caprifolium).
Blooming season: Late spring to summer- noted as not blooming regularly. Because growers can manipulate the bloom, you will also see kalanchoe blooming in stores as a gift plant at other times of the year.
Fruit: Four follicles with many seeds.
Seeds: Oblong, ellipsoid, with eight to fifteen longitudinal ribs.
Remarks: Kalanchoe grandiflora Wight & Arnott, is not the same plant as Kalanchoe marmorata, which is sometiimes noted incorrectly as a synonym. K. marmorata is a much shorter plant with longer maroon spotted leaves and white long tubular flared flowers. 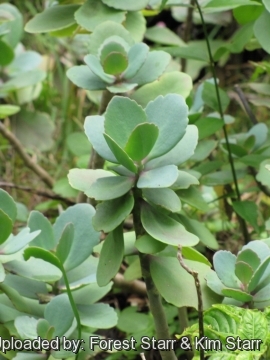 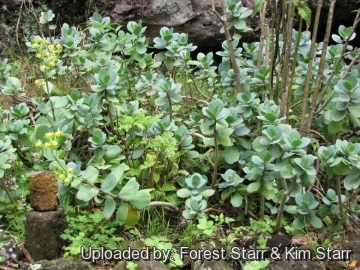 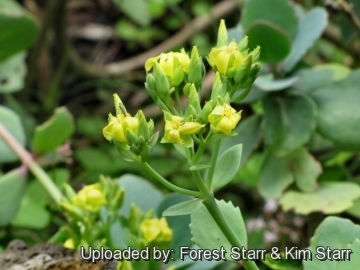 Cultivation and Propagation: Kalanchoe grandiflora is a very easy to grow and drought-resistant interesting plant for its unusual foliage colour and upright habit and is rewarding. It is also easy to take care as indoor plant. Easy warm germinator from a Spring or Summer sowing and will flower at quite a young age, gaining in size and performance every year eventually creating a spectacular summer display.
Potting mix: It thrives in nutrient poor soils consisting of equal parts of loam and sand, with pumice or lava grit added to ensure good drainage.
Exposure: It takes a good deal of sun, though still prefers some shade. Place your kalanchoe in an east- or west-facing window during spring and summer and move it in a south-facing window from about November to March. Place your kalanchoe in a lightly shaded area in a greenhouse or outdoors if you don’t want to grow it inside.
Watering: It needs moderate watering in autumn and spring while in summer it should be watered thoroughly and allow the soil surface to dry out before re-watering it. Then, water the plant until water drains out the pot bottom. Discard any water collected in trays or saucers. In winter give only occasional watering (only when the plant starts shrivelling), but it will generally grow even in winter if given water. These plants will survive on neglect. Over-watering is the most common cause of plant failure.
Fertilization: Fertilize the kalanchoe with a blooming houseplant fertilizer according to 1/2 label directions after watering and then once a month until November.
Frost resistance: It is a long lived species suited to climates that receive only light Winter frost or grown in pots and moved under shelter in cold. It prefers intermediate to warm temperatures but it is hardy to -2 ° C for short periods. Temperatures between 12 to 29 ºC are ideal.
Maintenance: The dried flower stalks and dead leaves can be removed. Cut the kalanchoe back to 8-10 cm with pruning shears after it finishes blooming. Blooming can last as long as 3 months. Set the pot back away from bright light and don’t water the pot for a month after you’ve pruned it. Bring the pot back into a bright window after a month and water it well.
Remarks: Kalanchoe grandiflora along with Aeonium arboreum were found to be the best rootstocks for grafting purposes.
Propagation: It is propagated by removal of small offsets at the base of the main plant or by leaf and stem cuttings. It grows easily roots at the end of a leaf stalk which has fallen onto ground. New plants are ready within months.
Use: It is an ideal plant for containers or rock gardens.