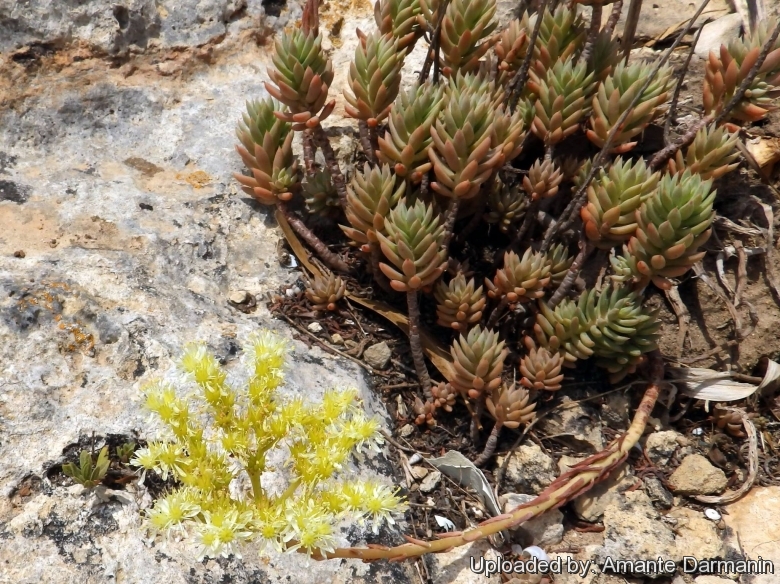 Origin and Habitat: Mediterranean region from Portugal to Balkan Peninsulas and Morocco to the Asia Minor (Syria, Israel). Doubtfully established in eastern North America. Type locality: hills of Baux, France.
Habitat and ecology: Sedum sediforme is found on roadsides, embankments, cliffs, and other dry places, on the coast or inland such as: rocks, walls and stony places, largely on calcareous soils and clay. 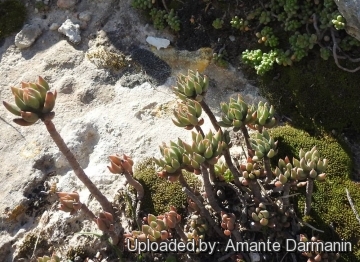 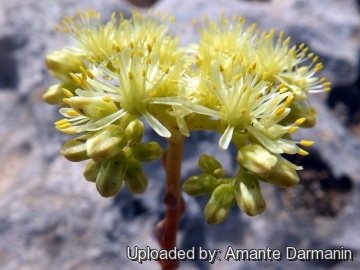 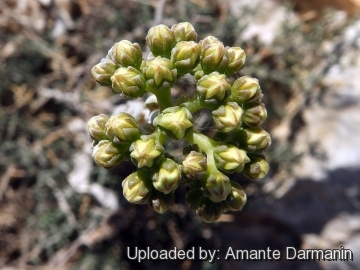 Cultivation and Propagation: Sedum sediforme is a succulent perennial sedum, with yellow flowers. It is a robust and extremely tough plant. It is sometimes cultivated as an ornamental rock garden plant or in border fronts. Best used in areas where unusual foliage texture and colour are appreciated. As a long-day plant it grows vegetatively for most of the year and dainty, airy white flowers bloom in midsummer. Moderately drought tolerant, it is reliably hardy and provides interest year round, and needs only minimal care to reward you with its attractive texture. Be aware when planting that the amount of sun and water this plant receives also affects the colour of the foliage.
Exposure: It cannot grow in the shade. It prefers light shade with ample airflow rather than full sun, except in cool coast-side locations. Bright light is required to prevent "stretching" of Sedums ("stretching" occurs when a moderately fast growing plant such as an Sedum, is grown in dim light or over-fertilized, which causes overly lush growth that contributes to weak, pallid plants).
Waterings: Sedum sediforme is able to tolerate dry periods and survive drought without the need for watering, but it will grow stronger if they receive adequate moisture during its growing season, but never allowing the plant to remain waterlogged (root rot sensitive). Avoid overhead watering under humid conditions, especially during winter.
Soil: It is essential in cultivation to use a very porous soil, which will allow quick drainage.
It adapts to light (sandy), medium (loamy) and heavy (clay) soils, and is suitable for acid, neutral and basic (alkaline) pH. Sedums are shallow rooted plants, and therefore benefit from good levels of organic matter in the soil. Give it enough root space for optimum growth.
Ventilation: Good air movement is important for minimising pest and disease risks, and avoiding excessive humidity in cool winter conditions is important to successfully growing Sedums in the nursery environment.
Hardiness: Cold-hardy, it can take overnight temperatures to -25 C however, the ideal temperature range during the summer growing season is 5-25°C, with the cooler autumn temperatures tending to make their foliage colours become more intense than those of the active summer growing season.
Pests and diseases:* Aphids like this plant (and all flowering sedums).
Edible Uses: The leaves are cooked. Although not poisonous, if large quantities of this plant are eaten it can cause a stomach upset.