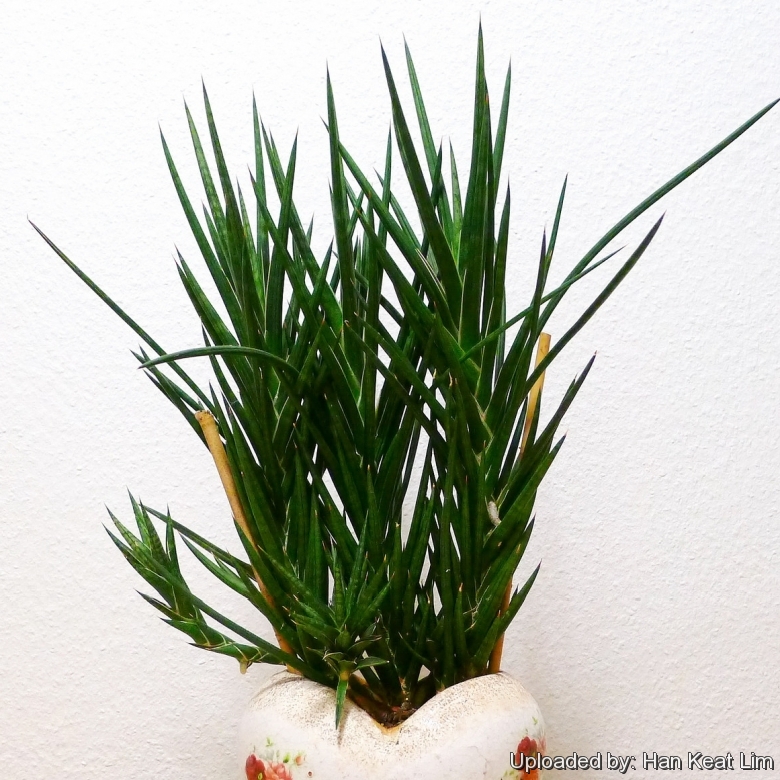 Description: Sansevieria francisii is a compact herbaceous perennial leaf-succulent that elongates and sends down pandanus-like walking legs (stolons). The shape of the leaves and its crossbanding can be best described as being similar to those of Sansevieria suffruticosa. This plant however has leaves longer than the former, up to 15 cm in length and as sharply pointed. The distinctiveness of this plant lies in its growth form: the leaves stack in compact rows of five and it keeps adding more rows until they either flop over or send out stolons, or both. In this manner it can grow to a lenght of 60 cm or more. It is quite an handsome plant, particularly in the younger stages. It was firstly described in 1995 by B. Juan Chahinian.
Derivation of specific name The specific epithet honors the succulent collector Francis K. Horwood .
Stems: Up to (10-)30-40(-60) cm tall densely covered by leaves. Due to the heavy weight, the stems are often bent. Stolons are sent down both from stem base and from among the leaves.
Leaves: Up to 40, spirally arranged in five rows, very tight. Blade simple, porrect, round, small, and short, only 7-10(-16) cm in length, 8-14 mm thick, with pointed spine-like tip to 5 mm long, green with grey-green cross banding. A shallow distinct channel is present at least for one quarter to three quarters of the length on the upper surface of the leaves and four to six dark green vertical lines turning into grooves, almost to the apex, one of these on the upper surface and through the channel. The margin is brownish red with a white membrane along the basal half of the leaf, green in second half toward the tip. The leaf surface is slightly rough.
Inflorescence: Paniculate, erect or slightly curved, (12-)20-25(-30) cm tall. The panicles densely covered with 1-2- flowered tufts in the upper half of the inflorescence. The 4 bracts are triangular in shape 3 x 6 mm in size. The flower stalk is long up to 8 millimeters. Bracteoles absent. Pedicel 2 mm long.
Flower: Greenish white to brownish green. Flower tube up to to 2 cm long. Segments white tip reflexed, 8–10 mm long. Stamens 10 mm long, anthers 2 mm long; style 13 mm long.
Similar species: Sansevieria francisii is similar to Sansevieria gracilis but differs by the 5-leaved whorls, the compact habit, the short, straight and slightly rough leaves, and the shorter inflorescence.

Notes: The genus Sansevieria numbers about 60 species most of them native of Africa, it has been variously included in the Amaryllidaceae, the Liliaceae and the Agavaceae but is nowadays usually placed in the Dracaenaceae.

Cultivation and Propagation: Sansevieria francisii are easy to growing and tolerate a wide range of conditions. A great container plant that needs little care.
Soil: Use a soil mix consisting of 3 parts loam to 1 part of pumice. Always underpot sansevierias.
Moisture requirements: The plants are very drought tolerant and are watered about every other week during the growing season. During the winter months they are watered once a month. Water sparingly and not at all as temperatures dip in winter but can tolerate going months between watering.
Fertilization: They are fertilized once during the growing season with a balanced fertilizer.
Light requirements: Will tolerate low light levels but grows best and flowers if given bright light and even tolerates full sun. In the garden In mild to tropical climates it prefers semishade or shade and it is not fussy.
Hardness: Sansevieria francisii is theoretically hardy to -2° C, particularly when dry - but it is best to avoid freezing temperatures. If growing outdoors in frost free areas keep in a covered patio or under an area where plants do not receive winter rainfall.
Heat Tolerance: Excellent.
Propagation: Sansevierias are propagated by cuttings or by divisions taken at any time. Cuttings should be at least 10 cm long and inserted in moist sand. A rhizome will emerge at the cut edge of the leaf.