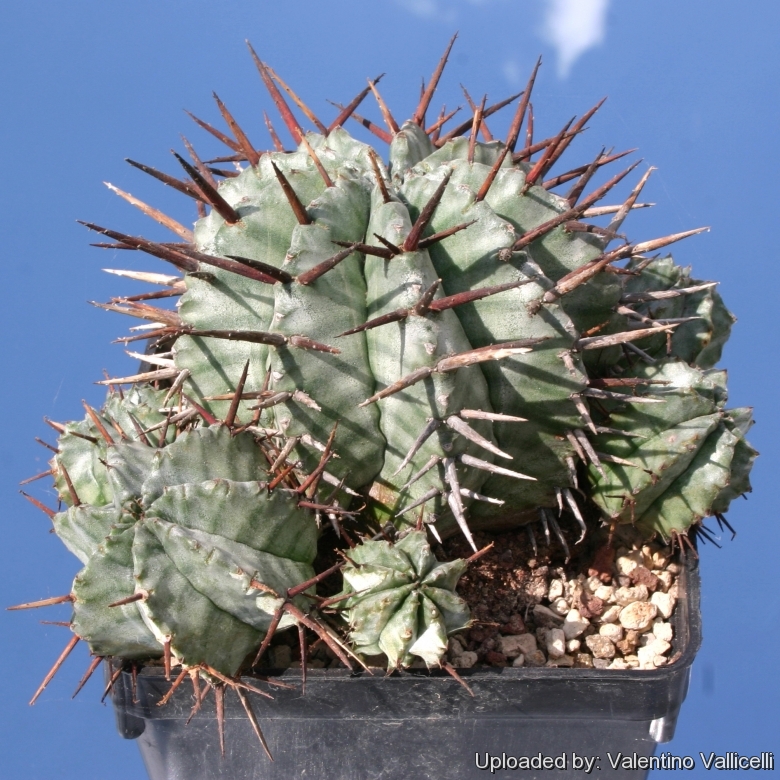 Euphorbia horrida Photo by: Valentino Vallicelli
It is a wonderful example of convergent evolution in fact it resemble incredibly to some new world cacti. The species name 'horrida' comes from the Latin for spiny referring to the formidable rows of spines up to 40 mm long. If the spines weren't deterrent enough, they have also a poisonous, corrosive sap.

Description: Euphorbia horrida is a spiny succulent shrub with irregular basally clumping stems. In age it will forms tight clumps of upright columns up to a metre wide that closely resemble some cactus species. It also has clustered crowns of somewhat ferocious spines much like the true cacti.
Stem: 100 to 150 mm thick, up to 75 (150) cm tall, erect, cylindrical, blue-grey to grey-green and often with white stripes.
Ribs: 10 to 20, wing-like, prominent, deeply grooved between and more or less undulated
Spines: On the ribs there are 1-5 persistent peduncles, spiny and crowded together about 4-10 mm long and 1-4 formidable main spines up to 40 mm long and very rigid.
Leaves: Inconspicuous and ephemeral in the centre of the plant.
Peduncles: Solitary 4-8 mm tall, hairy with small bracts.
Flowers: Very small green-yellow solitary cyathia approx 4 mm in diameter. Involucre finely hairy with 5 glands and 5 large lobes. Pistil three-lobed. Involucres glands are green, blooms in summer.
Remarks: This plant is somewhat variable with many varieties and forms, and perhaps natural hybrids between it and taller Euphorbias, giving rise to the big, spiny forms like Euphorbia horrida var. noorvalescens, furthermore there are several other similar Euphorbia species (particularly Euphorbia polygona) which often looks a lot like some of the forms. Euphorbia horrida and Euphorbia polygona are hard to tell apart only by body characteristics, at least when the plants are young. The only certain characteristic is in their cyathia. Euphorbia horrida bears green cyathia that sometimes may turn brownish with the age. The cyathia of Euphorbia polygona are red to deep purple.
Parasite: E. horrida is the suitable host plant for the charming parasite Viscum minimum (mistletoe). A minute monoecious, parasitic plant that grows profusely within the stem of the host. Viscum minimum is one of the few types of mistletoe that is ever cultivated outside of its native land. It doesn’t cause significant harm to its host plant, and will produce crops of colourful fruit in time for the holidays year after year.

Subspecies, varieties, forms and cultivars of plants belonging to the Euphorbia horrida group

Notes: Euphorbia horrida is a wonderful example of convergent evolution. In fact it incredibly resembles a spiny cactus. 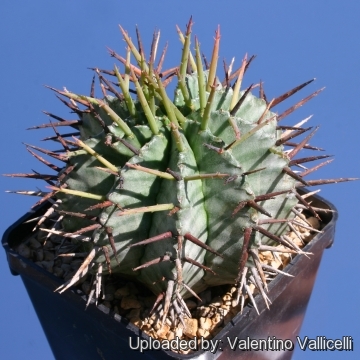 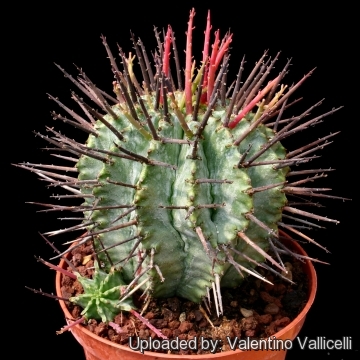 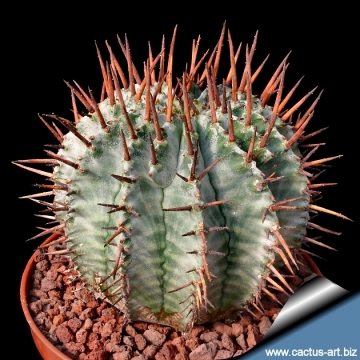 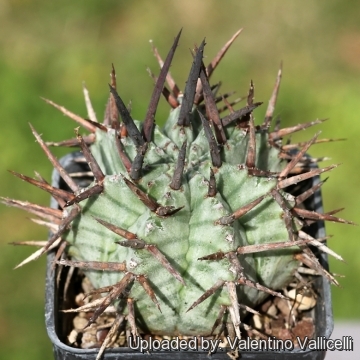 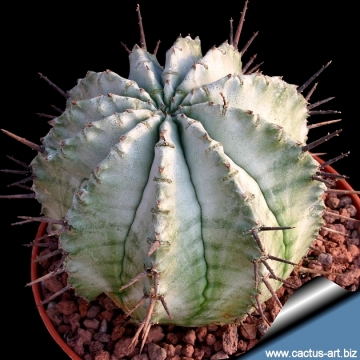 The rounder and whiter forms are often very pretty and appreciated by collectors. Photo by: Cactus Art 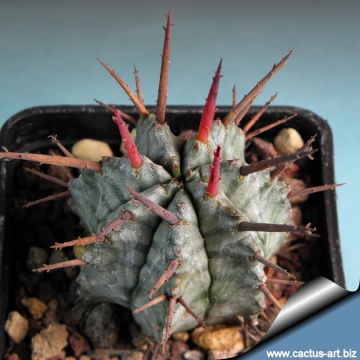 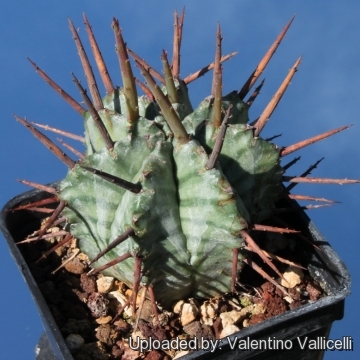 Euphorbia horrida Photo by: Valentino Vallicelli
Send a photo of this plant.

Cultivation and Propagation: It is a pretty easy species, it grow well in a very draining mineral potting substrate but it isn't picky about soil, the area where this plant is native receives rains in both winter and summer, so it can be watered moderately all year around (except in the coldest month of the winter as it rot easily especially if over wet ) During the summer, they enjoy average feeding and watering. Mature healthy plants are tough and can also be grown out of where frost is not too severe , it can tolerate temperatures down -4°C (-10° C if the roots are kept dry). It like Light shade to full sun, but different clones vary in their tolerance of full sunshine. The general rule is that the smaller and rounder the variety, the less it can tolerate full sunshine.
Propagation: It is propagated from seed sown during spring or summer. Germination occurs within 3 weeks but it can be reproduced by cuttings (The larger forms tend to branch enthusiastically and offsets are readily available) if you remove an offset, remember to let it dry for a week or so, letting the wound heal (cutting planted to soon easily rot before they can grow roots). It is better to wash the cut to remove the latex.
Flowering can be achieved within 5-8 years.
Warning: As with all other Euphorbias when a plant get damaged it exudes a thick white milky sap known as latex. This latex is poisonous and may irritate skin, and pay extreme attention not to get any in your eyes or mouth. Cultivated plants must be handled carefully.