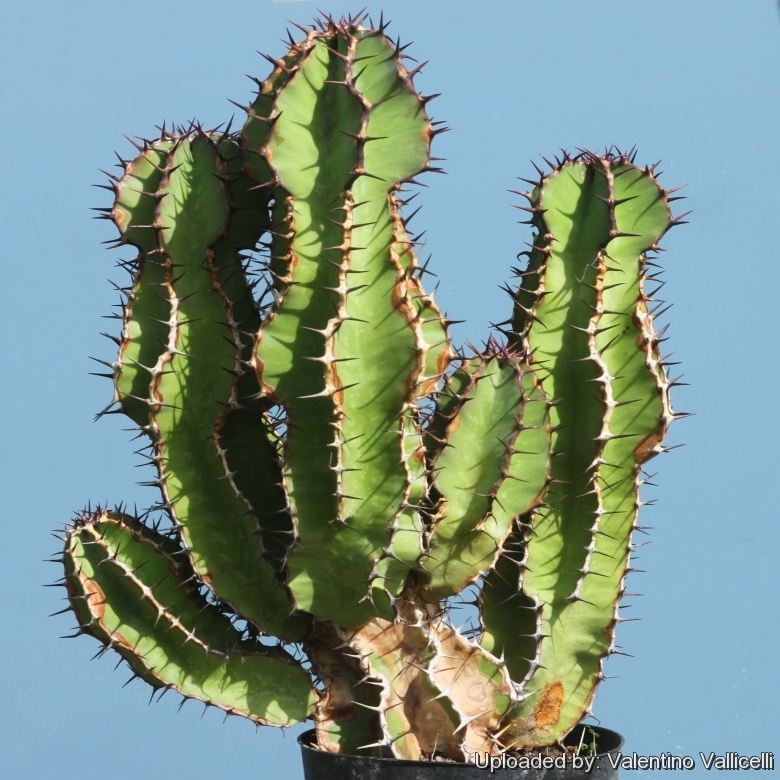 Origin and Habitat: Fairly widely scattered throughout South Africa on bolth sides of orange river (Namaqualand, Bushmanland ) and Namibia
Habitat: It is an opportunistic grower, common to locally abundant on hill slopes, uncommon on rocky outcrops; occasionally found on hilltops and in other habitats. Often growing along with Aloe dichotoma. Annual rain fall varies from 150 to 300 mm

Description: Euphorbia avasmontana is a many-stemmed, spiny, columnar cactus-like succulents branching at the base, 2-2,5 m tall that can sucker to nearly as wide. It is one of many South African Euphorbias that at fist glance look a lot like each other. Very neat habit and makes a good specimen landscape plant in a xeriscape garden.
Stems: Rarely re-branched 6-7 cm in diameter irregularly constricted at variable intervals (approx 10-15 cm), with milky latex.
Ribs: 5-7, with shallow furrows, about 1 cm apart.
Leaves: Only present on young growth on most months.
Spines: Stipular spines straight, paired, joined in a horny margin,1-2 cm long running up and down the full length of the columnar growths.
Flowers: 2–3 cymes with small (Ø 8 mm) yellow cyathia in a horizontal line, borne between spine-pairs, leaving 2–3 small scars when they fall. Nectar gland, oblong, touching, yellow.
Blooming season: Mostly in spring and autumn, but other months as well.
Fruits: Distinctly three-angled capsules up to 6 mm wide.
Seeds: Globose 1,7 mm in diameter, smooth.
Remarks: May easily be confused with Euphorbia virosa and other large euphorbias, and are therefore probably underrecorded. The differences lie in the number of scars left by the cyathia when they fall, the shape of the capsule, and the shape and branching of the stem.

Subspecies, varieties, forms and cultivars of plants belonging to the Euphorbia avasmontana group 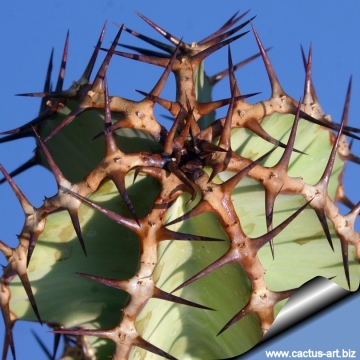 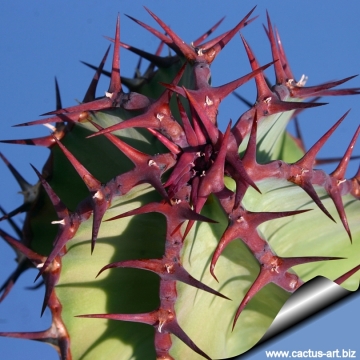 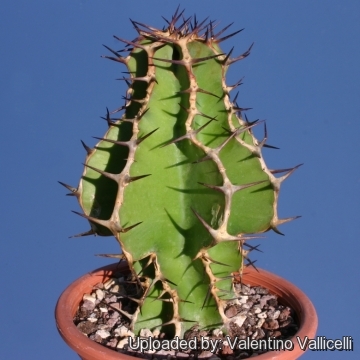 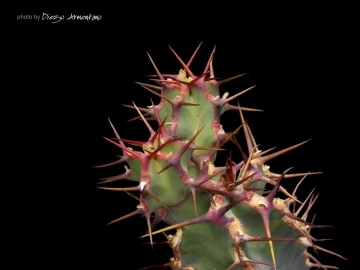 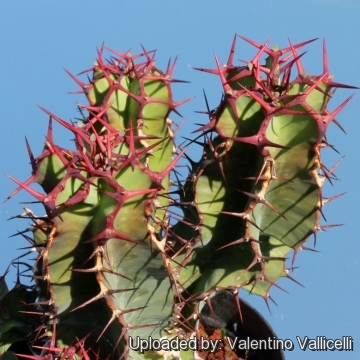 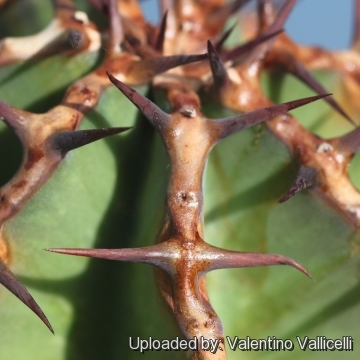 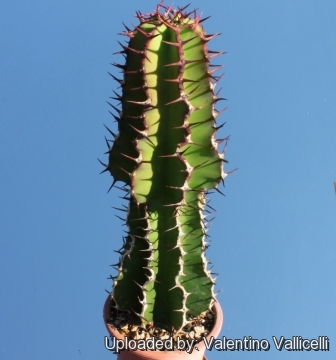 - The spines are found in pairs and form a spiky margin along each ridge on the branches. The outer rib-ridges have continuous, narrow and dark spine shields running along them. Photo by: Valentino Vallicelli 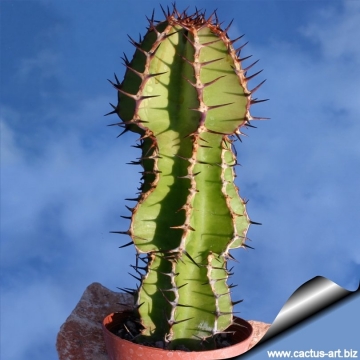 Cultivation and Propagation: It is an easy species to grow that is suited for any well drained soil in full sun. But young plant are happy growing indoors. Give the plant an airy growing medium which mainly consists of non organic material such us clay, pumice, lava grit, and only a little peat or leaf-mould. Water regularly during the active growing season from March to September. No water should ever be allowed to stand around the roots. Keep almost completely dry in winter. It is a moderately fast grower, and will quickly become large landscape masterpieces in just 5-10 years. Only downside is from strong winds, the columns often smash into each other, causing permanent scarring... best to plant in such a location where winds are not a big issue. It is a long lived plant and once established, it will be content in its position and with its soil for years. It can tolerate moderate shade, and a plant that has been growing in shade should be slowly hardened off before placing it in full sun as the plant will be severely scorched if moved too suddenly from shade into sun. Like quite small pots, repot in very later winter, early spring. Frost tender, frost free zones only.
Propagation: It is easy to propagate by cuttings in late spring to summer, just take a cutting of the plant let it dry for 1 or 2 weeks and stuff it in the ground (preferably dry, loose, extremely well draining soil).
Warning: Its latex is reputed the most poisonous in all of the species. Can irritate the skin even if there is proximity and no actual contact, a slight smear on the skin or face produces blisters and inhalation of the air close to a bleeding plant can produce a burning sensation in the throat. Latex irritates the eye and can cause blindeness. If contact is made with this white sap, take care to not touch face or eyes before washing hands with soap and water.

Fishing: It is used to stupefy fish, making it possible to catch them by hand. The fish poison is prepared by soaking a bundle of grass in the latex, tying it to a stone and throwing it into the water. Paralysed fish rise to the surface within a short period of time.
Gardening: This tree can be grown in large, rocky, well-drained soil in gardens in drier areas, however, because of the latex and spines, is not advisable for a family garden. It is very drought resistant but susceptible to frost.