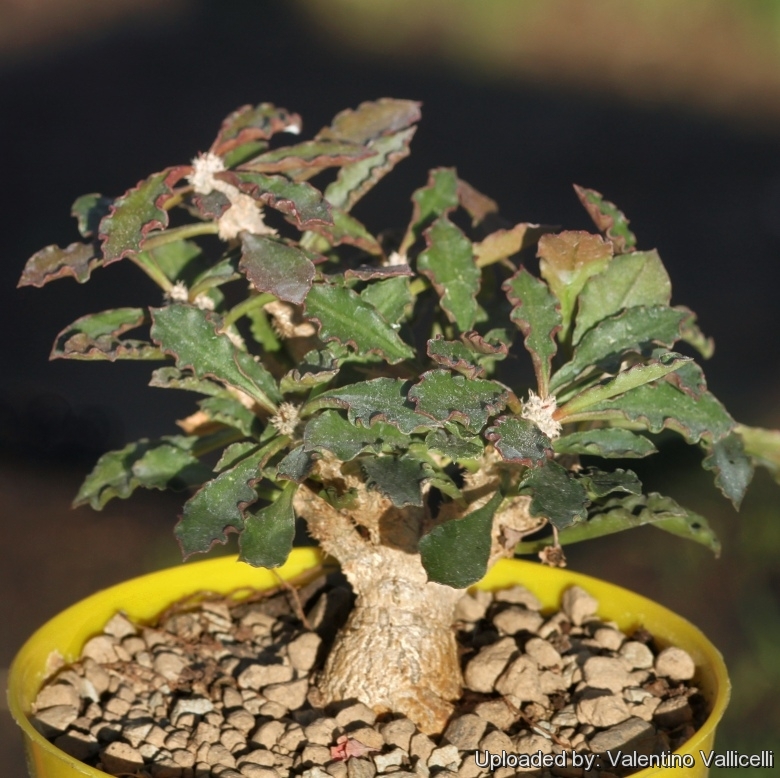 Origin and Habitat: It is endemic to Ambovombe (and possibly in other close areas and Tulear) on the southern tip of the island of Madagascar where it is locally common.
Habitat: Its natural habitats is the Alluaudia-Didierea forest around the small town of Ambovombe, on rich soil in deep shade under shrubs. It is threatened by habitat loss, fire, habitat clearing for charcoal, collection of plants for horticulture.

Description: Euphorbia ambovombensis is an amazing dwarf geophyte succulents with a round or oval fat base (caudex) topped with several erect branches and spirally arranged leaves creating an almost animated appearance. It eventually becomes a small shrubby bush up to 35 centimetres over time.
Similar species: It superficially resemble Euphorbia decaryi var spirosticha, but differs from having a large caudex and does not spread via underground stems.
Caudex: Spherical, oval or in varied irregular shapes, grey-brown, 4-10 cm in diameter and about 4 cm in height.
Stems (branches): Thin and roundish (while those in Euphorbia decaryi are thick and angular), 10-20 cm long, 5 mm thick, branched mostly from the base, covered with prominent brown abscission leaf-scars.
Leaves: Thick, leathery, coloured in shades of green, brown and copper, wavy, their edges curled up, spirally arranged at the ends of branches, 3-5 cm long and 1-1.2 cm wide, very variable in size and shape. The leaf margin waviness depends on growing conditions especially water availability and intensity of exposure to sunlight.
Flower: Not particularly showy, but intriguing, light green or light brown emerging between the leaves giving the plant an ethereal feel. 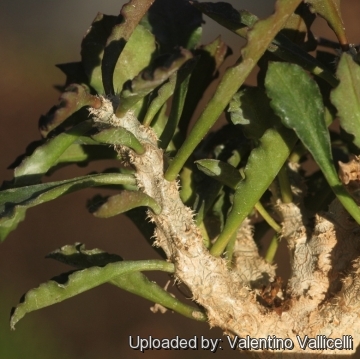 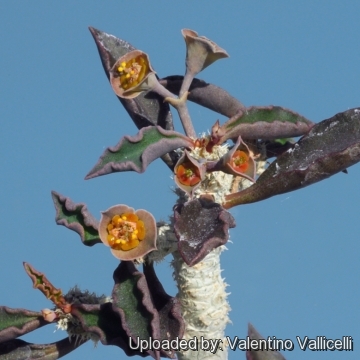 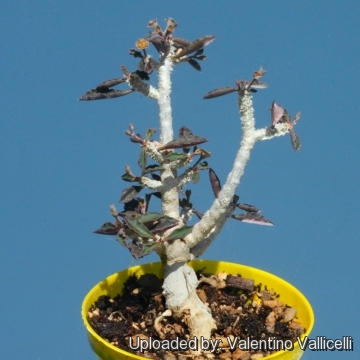 Euphorbia ambovombensis Photo by: Valentino Vallicelli
Send a photo of this plant.

Cultivation and Propagation: Euphorbia ambovombensis is a particular favourite of caudiciform plant enthusiasts. Cultivation of this plant is the same as that for the other tuberous varieties of Euphorbia from tropical areas (Madagascar, and central Africa) , but it is not the easiest of all caudiciform Euphorbias. It is particularly prone to rot if left cold and damp while dormant. As the plant ages, it develops a nice caudex, and can be used to make extremely attractive bonsai.
Growth rate: It is a slow growing species and tubers take many years to enlarge.
Caudex exposure: The remarkable tuberous rootstock (caudex) is usually raised above the soil line so that this can be seen and more readily appreciated. The plants raised from cuttings produce a bunch of tangled tuberose roots, while seed raised plants produce a more rounded tuber with age. For best results the tuber must be exposed only when plans become mature enough, usually after several years (8-12 or more years) of underground growth, as the exposed caudex will no longer increase in size once it has been lifted above the soil line. In very old plants, the tuber can achieve massive proportions, so keep a plant for many years to grow an unusually large caudex.
Soil and pots: It likes pots with generous drain holes, needs a very airy potting medium which mainly consists of non organic material such us clay, pumice, lava grit, and only a little peat or leaf-mould, seeing that the main trunk is planted with the majority of the roots below the caudex line. It's rare that it will use the upper third of its soil and often this area serves like a mulch or support for the stem.
Fertilization: Need a perfect fertilizer diet in summer. Use preferably a cacti and succulents fertilizer with high potassium content including all micro nutrients and trace elements or slow release fertilizer.
Exposure: This plant has an excellent heat tolerance, and need full sun to light shade exposures, but can tolerate shade. However shade grown plants will tend to produce fewer, and etiolated growth (weak, gangly stems with unusually long internodes, and generally paler green coloration). The colour of this plant is much more marked if grown in full sun. But if it is possible to keep the growth of this species compact, with denser, shorter stems of a more uniform length (rather than looking weedy) such plants can be outright attractive.
Watering: Water regularly during the active growing season. No water should ever be allowed to stand around the roots. Keep almost completely dry in winter. Even though the swollen caudex ensures a long lasting water reserve making it very tolerant of under watering, this euphorbia is difficult, turning immediately to mush when over watered, or watered out of season. Care must be given in watering, keeping them warm and wet while growing, and cooler and dry when dormant.
Hardiness: Tender. Euphorbia ambovombensis does not require cool temperatures for its growth cycle or flowering as some of the cactus and crassula species do, and it has not an apparent dormancy period but periods where the emergence of new leaves stops and older leaves wither and drop. This spurge can be difficult to get it to look its best without a good amount of heat and sun and so it is only really suited to the tropics (USDA Zones 10-11). Keep the plant cooler in winter, but maintain the light as bright as you can so that any growth which it may produce at this time will not be etiolated. It can be grown outdoors in the summer months to benefit from direct exposure to light, and especially exposure to high summer temperatures. Protection in a warm greenhouse in the middle of the winter will greatly increase the survival rate.
Rot: Rot is only a minor problem with Euphorbias if the plants are watered and “aired” correctly. If they are not, fungicides won't help all that much. It is very unlikely to lose this plant from root rot from excessive water.
Maintenance: Re-pot every two years and trim off the dead 'arms'.
Known hazards: The latex/sap is poisonous and can cause skin rash, itching and general discomfort, and they should be handled with caution, particularly when pruning.
Propagation: The plant can be reproduced by seeds, cuttings or grafting. The seed will loose viability in storage, and may not be viable the following year, so the seed should be planted as soon after harvesting as possible. Germination usually occurs within about a week or two. If you remove an offset, remember to let it dry for some days, letting the wound heal (cuttings planted too soon easily rot before they can grow roots). Lay it on the soil and insert the stem end partially into the substrate. Try to keep the cutting somewhat upright so that the roots are able to grow downward. It is better to wash the cut to remove the latex. The newly planted stems take a few weeks to establish, and then start growing. Some plant form a perfectly symmetrical caudex when grown from seed. If a caudex is produced from cutting it is often distorted. For the caudex-forming Madagascan euphorbias, such as Euphorbia capsaintemariensis, Euphorbia moratii, Euphorbia primulifolia or Euphorbia ambovombensis it is recommended as a stock Euphorbia milii var. hislopii.