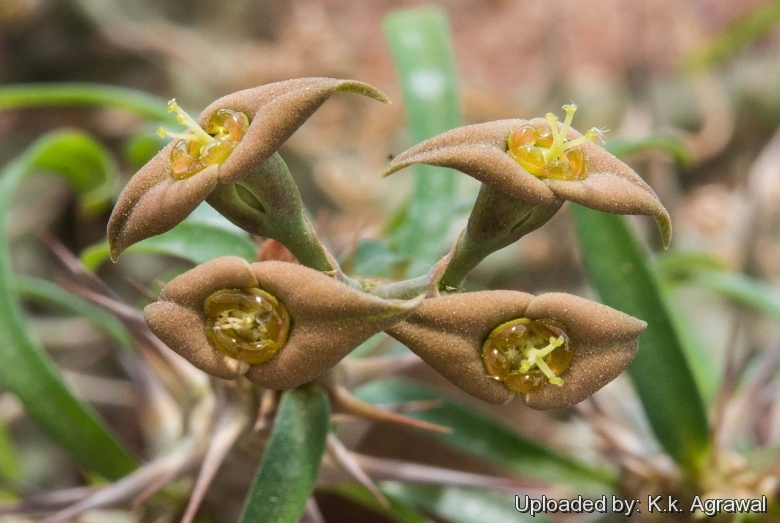 Origin and Habitat: South-west Madagascar: In the Mangoky river valley, near Nosy-Ambositra (Befandriana-Sud)
Habitat and Ecology: It is found on sandy soils in sandstone inselberg and rock faces. It forms shrubs of 1 metre height with numerous erect branches, fiercly protected by spines of up to 2 cm long. The climate is subarid. The area is highly prone to habitat destruction by fires. This species is also threatened by habitat degradation, and potentially by collection for the horticultural trade.

Description: Euphorbia rossii is a weird spiny branched succulent with long thin leaves in summer and just a bunch of spiny sticks in winter. The colour of the flowers varies from one plant to another from olive-green, to yellow to orange to red.
Habit: It is a perennial succulent shrubs to l m tall, densely branching from the base.
Similar species: Euphorbia rossii is related to both Euphorbia capuronii and Euphorbia genoudiana by the similar leaf and cyathophyll shapes. Might be confused by Euphorbia aaron-rossii, although the appearance are real distinguish.
Root: It has a napiform tuberous tap root (improperly called a caudex) which is most significant on younger plants. The “caudex” can grow to six centimetres or more in diameter and to 30 cm long and is often raised in cultivation.
Maim stem: Thick, to 3 cm in diameter, waxy.
Branches: About 1 cm in diameter reaching 50 centimetres in length, with very short branchlets to only 1 cm long.
Leaves: Deciduous, from branchlets, narrow-linear, to 4 cm long, 2-4 mm wide, apex rounded, subsessile. Petiole short.
Stipular spines: Crowded on raised podaria, to 15 mm, expanded at base, very strong, hard, mostly down curved, apically pubescent, accompanied by several smaller spines, hairy when young.
Inflorescences (cymes): Subterminal, subsessile carrying up to 20 cyathia with cyathophylls. Cyathophylls, spreading, acuminate, to 5 mm long, from greenish over pale yellow to salmon to ruby red.
Flowers (cyathia): Up to 3 mm in diameter; nectar-glands elliptic, yellow-orange. Each cyathium bear 4 or 5 glands, which in turn may be cinnabar-red to ruby wine-red.
Fruits (capsules): Obtusely lobed, to 3 mm in diameter. The capsules are explosive, and the seed goes everywhere. 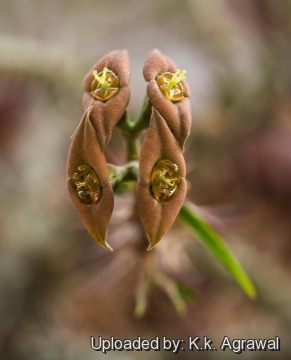 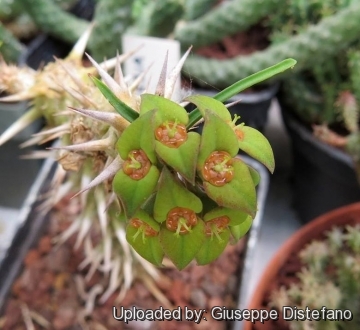 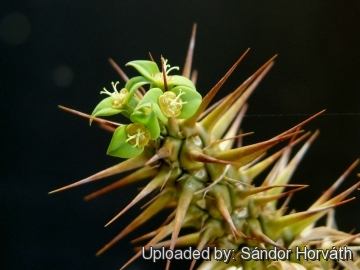 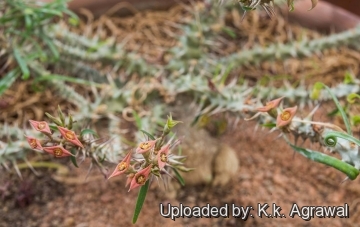 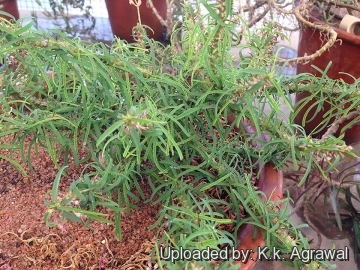 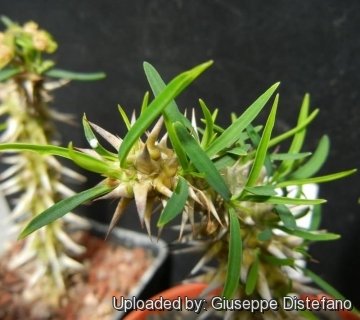 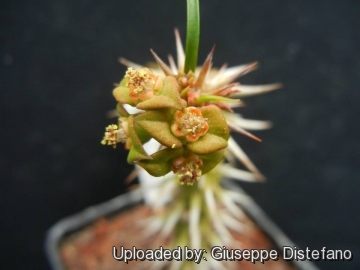 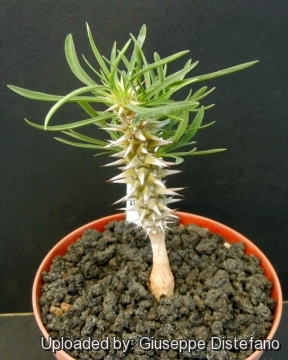 Cultivation and Propagation: It is a slow-growing and cold-sensitive species, it can to grow in both pots and in the ground, in areas with a mild climate, but they can even be grown indoors. They grow well in a very draining mineral potting substrate. During the summer, they enjoy average feeding and watering.
Hardiness: When dormant, plants are relatively cold-tolerants, but for safe cultivation it is best to avoid temperatures below 10° C.
Sun Exposure: Light shade.
Propagation: Usually by seeds, it can also It be propagated by cuttings; if you remove an offset, remember to let it dry for a week or so, letting the wound heal (cuttings planted too soon easily rot before they can grow roots). It is better to wash the cut to remove the latex.
Warning: As with all other Euphorbias, when a plant gets damaged it exudes a thick white milky sap known as latex. This latex is poisonous and may irritate skin, so pay extreme attention not to get any in your eyes or mouth.
Cultivated plants must be handled carefully.