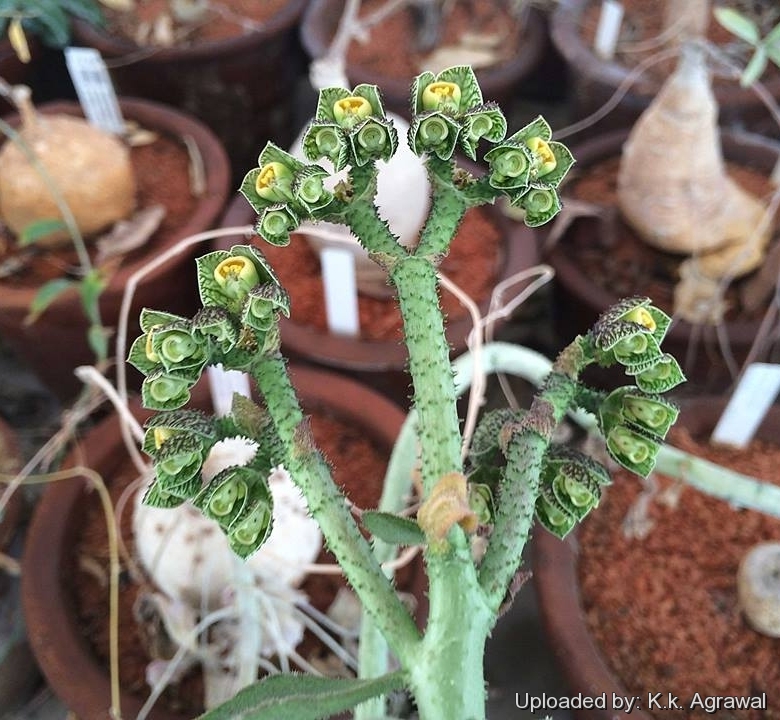 Origin and Habitat: Zambia, north east and south Tanzania.
Habitat and ecology: From near the cost to 1850 metres in savannah grassland and open dry deciduous forests.

Description: Euphorbia echinulata, best known as Monadenium echinulatum, is a dwarf perennial herb that grow annual shoots from underground tubers. It has nice stem and leaves.
Rootstock: Large, tuberous irregularly ovoid and more or less woody.
Stems: One to three, annual, unbranched, erect, about 30(-50) cm high and 6 mm thick, herbaceous or somewhat fleshy, terete, beset with numerous spreading, glabrous or scattered with soft-prickle-like processes about 1-1.5 mm long especially towards the apex, green.
Leaves: Alternate, rather few, 18-36 mm apart, somewhat fleshy, green; petiole 6-12 mm long, rather stout, flattish above; blade 2.5-12 cm long, 2-6.5 cm broad, the lower smaller, elliptic or elliptic-obovate, subacute or shortly and rather abruptly pointed, cuneately tapering into the petiole at the base, glabrous above or with a few fleshy bristles towards the base, densely bristly with soft fleshy sometimes branched hairs beneath. Midrib keeled beneath. Petiole winged to 5 mm long. Stipules glandular, small.
Inflorescences (cymes): Small, pedunculate, once to four times forked, with cyme-branches to 20 mm long, beset with 1-2 mm long soft bristles on the peduncle, branchlets and veins of the bracts, at first nodding; peduncles 12–90 mm long, stout, green. Bract-cup 6-8 mm long, 8-16 mm in diameter, with the margins much longer and wide than the involucre, overlapping in front, truncately rounded at the top, emarginate or shortly notched, with 2 slight keels down the back, light green, reticulated with darker veins.
Flowers (cyathia): 4-6 mm long and wide, cup-like, with barrel-shaped involucres, glabrous to minutely scabrid, open in front to below the middle, overtopping the inner lobes. Lobes subquadrate, 1.3 mm long and wide. Glandular rim 1.5 mm. high, incurved.
Male flowers: Bracteoles laciniate; stamens 3.8 mm, with thickened orbicular stigmas.
Female flower: Ovary with a double minutely crisped-toothed keel at each angle, otherwise glabrous; styles 2.5-3 mm long, scabrid, curved upwards from the base, united for 2/3 of their length, bifid at the thickened rugulose apex.
Fruits (capsules): Exerted on a reflexed pedicel to 6 mm long, 3-lobed, 5 mm long end wide, scabrid or with fleshy hairs to 1 mm long especially when young.
Seeds: Oblong, truncate at both ends, 3.2 x 1.8 mm, greyish brown, shallowly and densely tuberculate; caruncle pointed, stipitate, 1 mm in diameter. 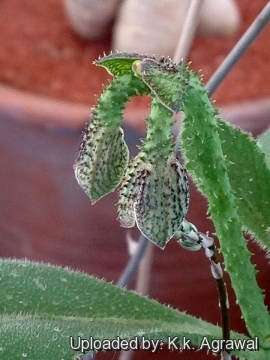 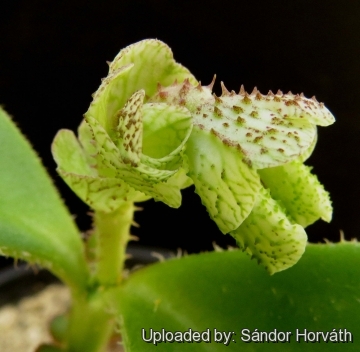 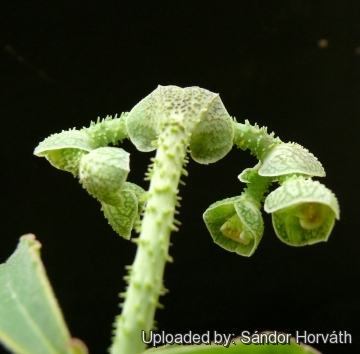 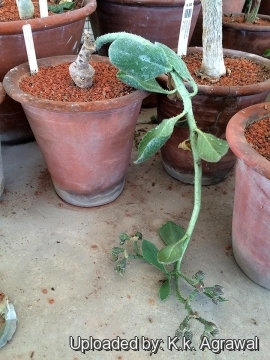 Ugly plant, they don't have a backbone. Photo by: K.k. Agrawal 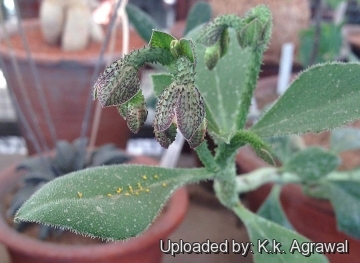 Euphorbia echinulata Photo by: K.k. Agrawal
Send a photo of this plant.

Cultivation and Propagation: Euphorbia echinulata (Monadenium echinulatum) is an interesting addition to a collection, but rarely seen in cultivation. It can be grown outdoors in frost-free climates and forms a small shrub.
Growth rate: It grows well, though very slowly, but it possible to increase the speed of growth to some extent by providing adequate amount of water, warmth, and fertilizer during the active growing season, but it’s susceptible to rotting if too wet.
Exposure: It needs light shade, but the caudex should be in the shade, while the leaves prefer some sun. Avoid direct blasting sun in summer. Bright light if grown indoors.
Soil: In pots it needs a very porous potting medium (add pumice, vulcanite, and perlite). It does better in a rather acidic soil.
Waterings: Water frequently while plant is in full growth, but keep dry during the winter after the branches have died back. It rot easily and do NOT like a lot of water when it has no leaves.
Fertilizer: Benefits from moderate doses of a well-balanced, slow-release fertilizer.
Frost tolerance: Due to its African origin keep warm in winter, the minimum safe average temperature is 15°C, although it can go lower for short periods. It can be grown outdoors in frost-free climates, need anyway to kept above 10°C and dry in winter. It is very prone to rot in cool, wet conditions. USDA Zone 10-12, but does very well in containers.
Maintenance: Repot every two years. It like pots with generous drain holes. In the winter, the branches die back and should be cut back t to encourage branching, to maintain an attractive shape and to ensure caudex habit.
Pest and diseases: White meldew, mould and other fungi.
Propagation: The species can be propagated by both seeds and cuttings. The plants for seed production are generally grown from cuttings since these bloom more freely. The plants for decoration are grown from seed since they develop a caudex.