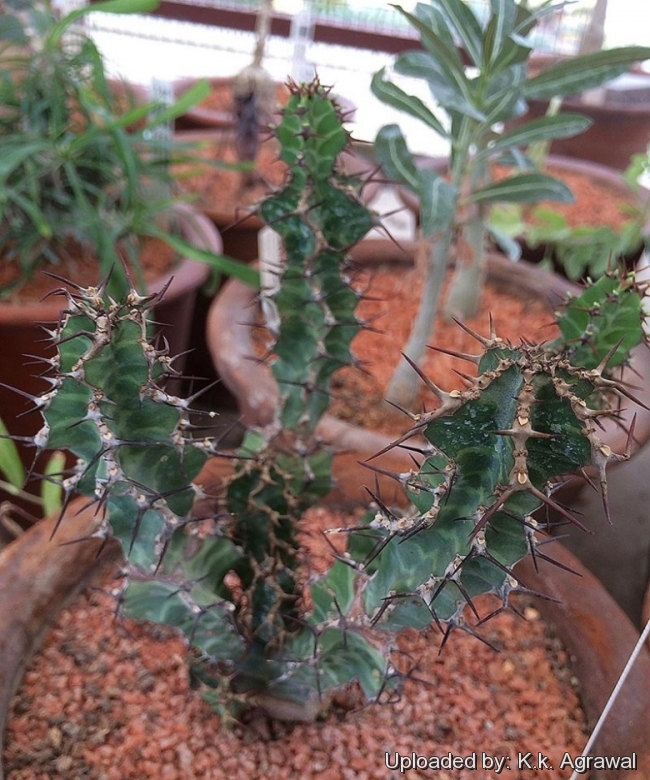 Origin and Habitat: Euphorbia knobelii is confined to a small area near Zeerust (Marico district) in the western Transvaal, Republic of South Africa.
Habitat and ecology: A very limited numbers of plants is restricted in distribution to a range of sandstone hills. It is potentially threatened by trampling by livestock causing habitat degradation.

Description: Euphorbia knobelii is a compact, shrubby, succulent Euphorbia from the Northwest Province of South Africa 70-100 cm tall. The short main stem has many branches at ground level, which are arcuate. It is a very attractive plant with a striking colouring of alternate dark- and yellowish-green markings on the branches, and paired dark spines. This could be the reason why it is also sought after by collectors. The flowers are yellow, vertical, with a short peduncle, 3 per flowering eye, and the overall effect is fairly spectacular.
Taxonomic notes: Euphorbia knobelii is a close relative to Euphorbia perangusta, not only in appearance but also in habitat preference. Some authors suggest that there is not sufficient distinction between E. knobelii and E. perangusta, and treat E. knobelii as a synonym of E. perangusta.
Derivation of specific name: The epithet 'knobelii' has been bestowed in honour of Mr J.C.J. Knobel, director of prisons in Pretoria 1927-32, who discovered the plant in Transvaal in the year 1933.
Stems: Main stem very short or quite buried in the ground, with numerous branches at ground level, which are arcuate to ascending or erect, and which produce secondary branches at the upper third that are thinner than the main branches. The 4- or 5-angled branches are irregularly constricted along their length at varying intervals according to the annual growth, with the segments up to 4 cm. thick at the broadest part, the secondary branches 2 to 2.5 cm. thick, glabrous. They are yellowish- green mottled with darker green markings. Angles compressed, slightly or conspicuously sinuate-tubercled, with the sides between them concave and up to 1.5 cm.deep; spine shields separate, though sometimes so close together as to appear continuous, 3 mm Broad .
Spines: Brittle, produced in pairs from the apex of the tubercles, up to 10 mm long, diverging, often with a pair of prickles up to 3 mm long above the the base.
Leaves: Rudimentary, soon deciduous, ovate, 2.5 mm long, 2 mm. broad, reflexed, glabrous.

Cultivation and Propagation: Euphorbia knobelii is a common and relatively easy plant to grow for pot culture. It grows well in a very draining mineral potting substrate, but it isn't picky about soil. The area where this plant is native receives rains both in winter and summer, so it can be watered moderately all year around (except in the coldest month of the winter, as it rot easily ,especially if over-wet). During the summer, they enjoy average feeding and watering. When dormant in winter, keep it totally dry at or around 4°C, even though it seems to tolerate light frosts well. Mature healthy plants are tough and can also be grown outside where frost is not too severe, but when left out it is more sensitive to frost. They do need a lot of light to keep their compact growth-form, but different clones vary in their tolerance of full sunshine. The plants that are not kept in full sun grow faster, but became untidy and may need support as they get larger, or branches fall off. But if grown in the protection of light shade, the thick purple spines of this low-growing clumping columnar plant have the best colour. Sometimes, in really hot full sun all day long, a plant will bleach out a bit. It soon grows into a large, many stemmed specimen. It is also a prolific bloomer.
Medicinal uses: It was used for stomach problems.
Propagation: It is propagated by cuttings or seeds. It branches enthusiastically, and offsets are readily available. If you remove an offset, remember to let it dry for a week or so, letting the wound heal (cuttings planted too soon easily rot before they can grow roots). It is better to wash the cut to remove the latex. The seed can be sown just under the surface in normal seedling trays in a sandy seed mix. Germination usually occurs within 1 - 3 weeks.
Warning: As with all other Euphorbias, when a plant get damaged it exudes a thick white milky sap known as latex. This latex is poisonous and may irritate skin. Pay extreme attention not to get any in your eyes or mouth.
Cultivated plants must be handled carefully.