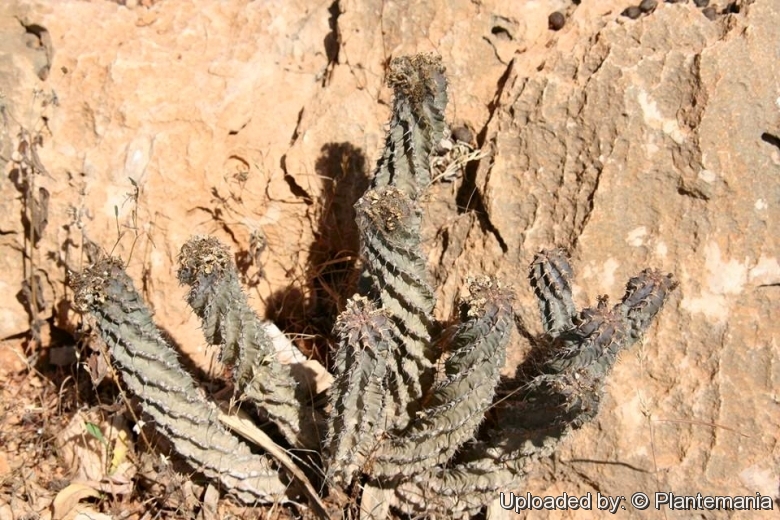 Euphorbia spiralis Photo by: © Plantemania
The stems can be either straight or spiraling and, in fact, spiralling of the stem seems rather rare.

Origin and Habitat: Yemen (Socotra)
Altitude range: Sea-level to 700 metres.
Habitat and Ecology: It is a fairly common spiny succulent of dry open areas over much of Socotra; also in the sparse and windswept vegetation on exposed parts of the limestone plateau, often occurring on rocky substrates. Euphorbia spiralis is common in several vegetation types and under no present or perceived threat. It has spiny stem with a caustic latex and is usually left largely undamaged by goats. E. spiralis is said to be on the increase in certain areas: for instance at Kilissan, an area badly effected by a series of severe droughts.

Description: Euphorbia spiralis is a scrubby, leafless, cactus-like succulent related to Euphorbia polyacantha. It is the only spiny succulent euphorbia on Socotra (a typical example of convergent evolution, morphologically strongly reminiscent of neotropical cacti), possessing thick succulent stems with rows of paired spines arranged along the longitudinal ridges. The specific epithet spiralis coined by Balfour refers to the spiralling of the stem in specimens he observed, however, stems can be either straight or spiraling and, in fact, spiralling of the stem seems rather rare. A second species, Euphorbia septumsulcata, was separated by the greater number of stem angles. However, this seems to fall within the variation found in E. spiralis and so is not recognized as an independent species. Euphorbia spiralis individuals varies noticeably in shape some form few branched open shrub while other have a distinct cushion-like growth-form, with the stems densely packed.
Stems: Candelabra-shaped, globoid to columnar, greyish-green, branched from the base, 40-80 cm high. Branches 5 7-angled. Angles compressed, straight or (occasionally) spirally twisted (both clockwise of counter-clockwise), sinuate.
Spines: Paired, arranged along the ribs upon solitary grey shields, small.
Leaves: Small, short lived, deciduous with a leathery texture
Flower: Peduncles (stalks) long and persistent with primary bloom time occurring in December in the Southern Hemisphere. The flowers are pale green in colour and unisexual, generally reduced and grouped into pseudanthia (flower heads) called cyathia. Each flower head consists of both male and female flowers, with the male flowers outnumbering the females. Female flowers carry three-part pistils located over three-part ovaries. Typically, female flowers produce three or more seeds.

Cultivation and Propagation: Seldom seen in cultivation Euphorbia spiralis are relatively easy and care-free Euphorbias to grow, both in pots and in the ground in areas with a mild climate, but they can even be grown indoors. They grow well in a very draining mineral potting substrate, but they aren't picky about soil. During the summer they enjoy average feeding and watering. When dormant, plants are relatively cold tolerant. They will rapidly mound, branch and spread. These are widely adaptable, able to take full sun that helps the plants to keep their compact growth-form, but different clones vary in their tolerance of full sunshine
Propagation: This species produce clumps of stems at the base of the main stem, these can be removed and rooted in spring to summer. It can also be grown from seed.
Warning: As with all other Euphorbias when a plant get damaged it exudes a thick white milky sap known as latex. The latex (resin) is virulently poisonos and contains some of the most potent irritants known. The latex is particularly dangerous for the eyes, skin, mucous membranes and open wound. It can produce burning pain in bones. Pains in limbs and paralytic weakness in the joints. Important respiratory and skin symptoms, terrible burning pains. So pay extreme attention not to get any in your eyes or mouth. Cultivated plants must be handled carefully.