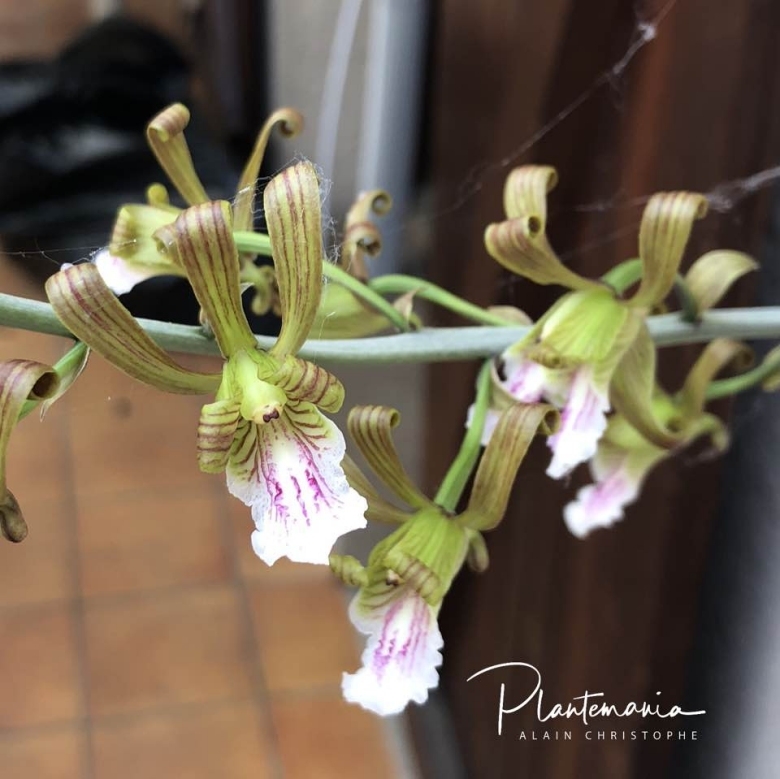 Description: Eulophia petersii is a robust terrestrial orchid with ovoid, conical or cylindrical pseudobulbous stems that grow always exposed above the ground. This handsome species has green flowers up to 35 mm in diameter, veined with purple-red and with a white lip bearing purplish to pink coloured crests. The 2-4 leaves grow at the apex of the pseudobulbs, they are V-shaped in cross section, thick, succulent and leathery in texture with a serrated edge, with its hard fleshy leaves it can be said to be one of the very few really succulent orchids.
Rhizome: Creeping, 6-8 mm thick, bearing scarious imbricate scales.
Stems: Pseudobulbous, mostly above ground, 4–23 cm long, 1–4 cm in diameter, green at first, turning yellow and ribbed, with 4–6 nodes and sheathing acuminate scales below, 3–4-leaved above. The pseudobulbs are anchored to the soil by a few thick, succulent roots up to 4–5 mm in diameter with a striking silvery-white velamen (outer layer of root tissue) .
Leaves: 2–4, usually 2, succulent, rigidly coriaceous, often grey-green, erect or falcate, keeled, somewhat conduplicate, narrowed above and acute, 14–95 cm long, 1–6 cm broad, keeled behind; linear-ligulate, margin horny, scabrid or serrate.
Inflorescence: The branched inflorescence of E.petersii starts growing in spring from the most recently matured pseudobulb and may reach a length of 1 to 3 m tall, carrying 30 to 200 flowers that open in succession over a period of four weeks. The scape is stout, with several (mostly 4) sheaths at the base, loosely paniculate above (usually with 3–7 branches), or rarely simple. Pedicel and ovary 2–3 cm long.
Bracts lanceolate or ovate-lanceolate, acute or acuminate, 8–18 nn long.
Flowers: Long lasting (will remain open for up to 2 months). Sepals and petals green, veined with purple-red. Sepals oblong-lanceolate, subacute or apiculate, 16–30 mm long, 2–6 mm broad, curled back at the tips, the dorsal erect, the laterals spreading. Petals oblong, obtuse, a little shorter and broader than the sepals 16–22 mm long and 4–8 mm wide, curled back at the tips. Lip 14–27 mm long, 8–17 mm across the side lobes when flattened, obscurely trilobed; side lobes broadly elliptical-oblong, obtuse, erect; front one broadly elliptical-oblong, or nearly quadrate, undulate 4–10 mm long, 6–14 mm wide, with a callus of 3 fleshy, erose ridges. Side lobes erect, mid-lobe subquadrate, Disc with three crenulate keels below, which are elevated into erect undulate lamellae on the front lobe. Spur clavate-oblong, incurved, 4–6 mm long. Column clavate, 8–9 mm long, long; apex broadly margined; base produced into a short foot 1–2 mm long. The flowering time varies from November to as late as April. Only towards the end of the flowering period new growth emerges from the base of a recently matured pseudobulb. This grows rapidly and matures in the short time before the dryer winter months set in.
Fruit (Capsule) Subcylindrical to ellipsoid, 4–5 cm long, pendent.
Similar species: Eulophia leachii and E.petersii are very similar but if the leaf is stiff the species is sure to be E.petersii as the leaves of E. leachii are more flexible. 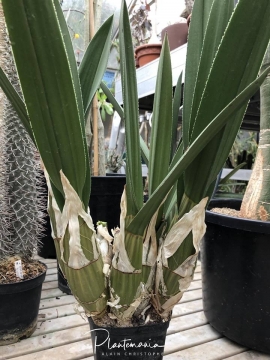 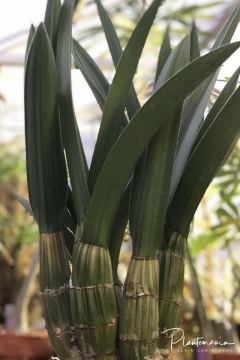 The gallery now contains thousands of pictures, however it is possible to do even more. We are, of course, seeking photos of species not yet shown in the gallery but not only that, we are also looking for better pictures than those already present. Read More...
Cite this page: "Eulophia petersii" Text available under a CC-BY-SA Creative Commons Attribution License. www.llifle.com 14 Nov. 2005. 18 Feb 2020. </Encyclopedia/SUCCULENTS/Family/Orchidaceae/35288/Eulophia_petersii>