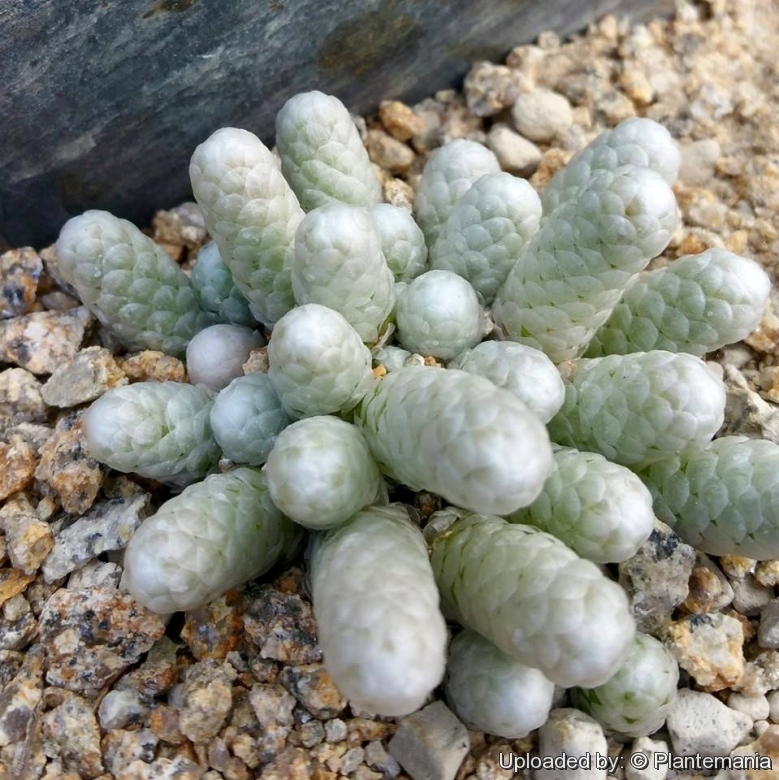 Origin and Habitat: South African endemic. The typical Avonia papyracea are present in the Little Karoo and Great Karoo (Eastern Cape). Subsp. namaensis occurs in the Richtersveld, southern Namibia and Bushmanland.
Habitat and ecology: Avonia papyracea grows in full sun among quartz rocks together with Tanquana hilmari, Gibbaeum heathii, Bulbine mesembryanthotdes, Crassula nudicaulis, Crassula tecta, Sarcocaulon patersonii, Aloe variegata, and Glottiphyllum sp. The unique white scales reflect much of the light and act as sun-shades over the tiny leaves beneath. Plants are highly cryptic and well camouflaged. They resemble the quartzitic pebbles among which they are found in karroid veld. Whole plants have been fancifully compared to coral or bird droppings and have been regarded as "mimicry plants", for long escaping the eyes of even the most attentive field workers. The population trend is stable

Description: Probably the best known member of its genus and and very popular among succulent fanciers Avonia papyracea (formerly known as Anacampseros papyracea), is a dwarf perennial herb scarcely even look like plants, with several slender branches radiating from a tapered rootstock or basal caudex, wholly clothed in silvery white overlapping scales (modified stipules, leaf bracts) completely concealing the tiny, fleshy green leaves below. The flowers are creamy white, scented, with five rounded petals positioned at right angles to what appears to be a central ring of yellow anthers, but most of its flowers last only 2-4 hours. The flowers are cleistogamous flowers, what means that they fertilize themselves with their own pollen.
Rootstock (caudex): Thickened, succulent, very short, much divided, crown small, below ground.
Stems: Simple, cylindrical or globular 1-5(-10) cm long, 6-8(10) mm in diameter, with blunt ends, white, scale-covered, growing flat on the ground, often curved, rarely branched to form a miniature shrublet.
Roots: Fine, fibrous.
Leaves: Completely concealed the stipules, much reduced to a smooth semiglobose body wider than long, spirally arranged, each subtended and over-topped by a scale-like stipule. Stipules multifarious, imbricated (which clasp the stem firmly at base and apically), scarious, snow-white, papery, semitransparent, linguiform to broadly ovate, roundish at top, quite entire, transversely wrinkled, woolly-barbate at base, 5–10 times longer than the thick leaves, 6-8 mm long, 2-3 mm wide. Small axillary hairs are present.
Flowers: Flowers creamy white to greenish white, included in the uppermost stipules at the branch tips, sessile, solitary, much shorter than the involucre, expanding for only 1 - 3 hours in full sun in the afternoon, otherwise cleistogamous (not opening), mostly self-compatible, what means that they fertilize themselves with their own pollen. This occurs either before the flower opens or shortly after it closes. Peduncle smooth, about 1mm long. Sep 2, sub-persistent. Petals 5, free, creamy white, roundish, 4 mm long, surpassing the calyx. Stamens 16-20. Anthers Yellow.
Fruits (capsules): Nearly globular c. 4 mm long the caducous, cap formed by sepals and exocarp leaving the skeletal endocarp of 3 valves surrounding the seed like a basket. There are very many seeds in the capsules and they ripen very quickly and are distributed by the wind.
Seeds: More or less round, pale brown with a white sheath.

Subspecies, varieties, forms and cultivars of plants belonging to the Avonia papyracea group 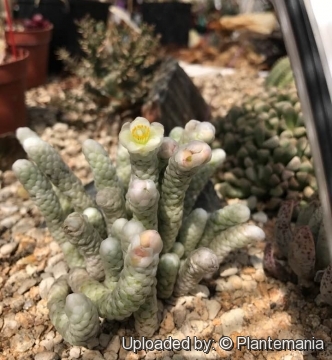 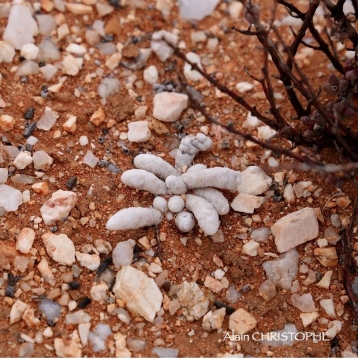 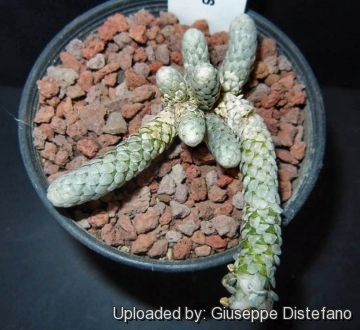 Avonia papyracea Photo by: Giuseppe Distefano
Send a photo of this plant.

Cultivation and Propagation: Although regarded as a choice and difficult plant, in cultivation it is relatively easy. Plants grow very slowly and requires careful cultivation. Clustering in cultivation, if grown correctly, it will reward the grower with generous displays of tiny flowers.
Potting medium: Since roots are quite shallow, use a cactus mix or add extra perlite or pumice to regular soil potting soil. A gritty, very free-draining compost is suitable, and clay pots help the plants to dry out between watering. For best results, use a shallow pot, and only use the smallest diameter pot that will accommodate the plant.
Watering Needs: Water normally in the growing season from March to October, keep dry in winter.
Fertilization: Feed with a high potassium liquid fertilizer in summer.
Hardiness: It is quite frost resistant if kept dry, hardy as low as -5° C. Recommended Temperature Zone: USDA 10-12.
Sun Exposure: Light shade to full sun. High levels of light are needed to flower and for good plant development.
Reproduction: Seed that germinate at 15-21 °C. The seeds germinate very quickly. In cultivation the young plants develop much quicker than in their natural surroundings, where they don't get ample water supply. Generally they are not easy to raise from seed as too much water kills them immediately, which also happens when they are not watered at all.