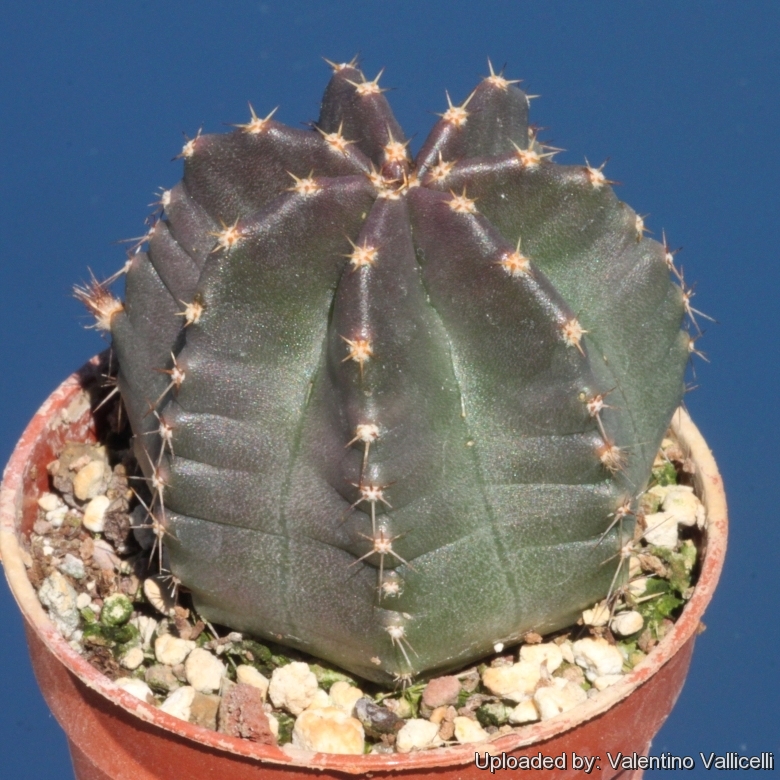 Description: Echinocereus subinermis var. luteus (ayn: Echinocereus luteus), is one of the morphological or local forms of Echinocereus subinermis, and the two plants are not readily distinguishable, if not for the geographical provenance. More likely they are one and the same species and most authors have dismissed E. luteus as perhaps not worthy of even varietal status. Echinocereus subinermis var. luteus is a beautiful golden-flowered cactus with bluish green, more or less purplish, stems. Old individuals attain a height of 30 cm rarely, and the plant rarely branches once or twice from the main stem. The stem is oval to conical shaped, 8 to 9 ribbed, with very small spines. Flowers are yellow and outer petals are tinged with red colour, and fragrant. The spines on flower-tube and ovary are acicular.
Stem:* Short to elongated up to 30 cm tall, generally solitary, sometimes branching near base, bluish green, more or less purplish, 8 strongly or 9-ribbed.
Ribs: Rather thin, hardly, if at all, undulate, rounded.
Areoles: Small, 10 to 12 mm apart.
Spines: Small, the radials 6 to 8, unequal, 2 to 8 mm long, widely spreading, white with darker tips.
Central spine: Usually missing, if present, single, and porrect.
Flowers: On each rib appearing near top of plant and from second or third areole. Flower-buds acute, reddish, covered with long, brownish bristles; areoles on ovary and flower-tube bearing white wool and light-coloured acicular spines with dark tips; flowers pale yellow, delicately sweet-scented, 7 cm long, including the ovary. Outer perianth segments streaked with red. Inner perianth segments lemon-yellow, oblanceolate, acute. Filaments light yellow, stigmas deep green.