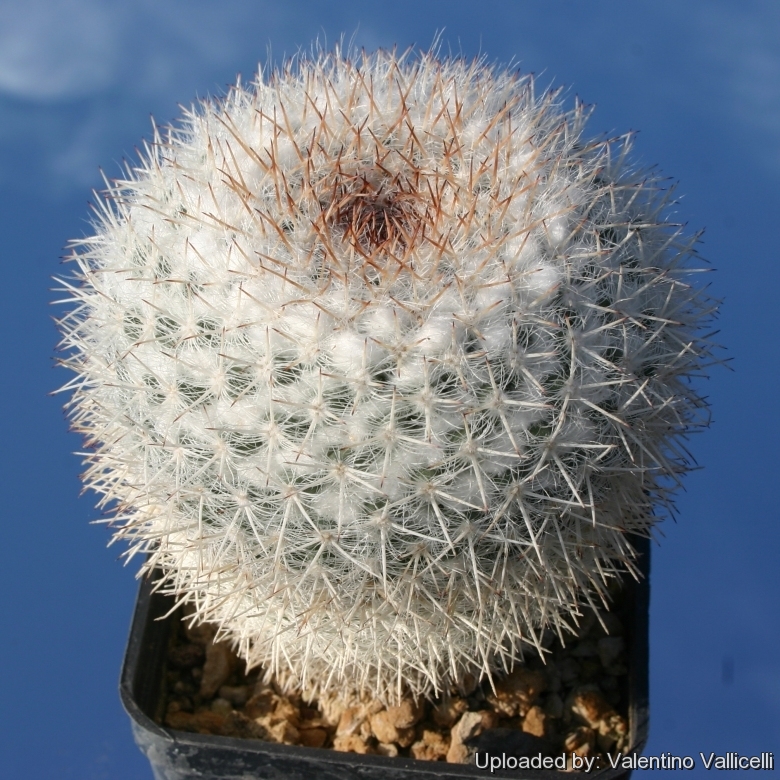 Mammillaria parkinsonii var. cadereytensis (Mammillaria cadereytensis) Photo by: Valentino Vallicelli
Its symmetrical globose body is largely obscured by the fairly numerous interlacing white radial spines and wool, against which the reddish centrals stand out. After several years the old plants divide at their apex, ramifying dichotomously.

Description: Simple or dichotomicously branched (occasionally ramifies , producing a few basal shoots) with short dense spines and wools.
Stem: Symmetrically globose at first, later cylindrical, with a depressed apex that appears completely white. Up to 12 cm tall, dull green and may, with age, become rubberized at its base. With latex.
Tubercles: Short cylindrical/conical firm, 6-7 mm long and 2 mm wide, arranged in numerous, very close-set spirals. The Axil is woolly with bristles in the floriferous portion.
Areoles: Oval and woolly when young.
Roots: Fibrous.
Radial spines: up to 30, short, 3-5 mm long, acicular, straight, somewhat horizontal radiating and arranged laterally on each side of the tubercle, white.
Central spines: 4-6 up to 1 cm long, subulated, rigid, divergent, one pointing upwards and often longer, smooth, thicker at base, they are reddish with a darker tip.
Flowers: Small, funnelform, 10-12 mm long and in diameter, yellowish with darker reddish midstripe.
Fruits: Attractively deep dull pinkish-red coloured. Club-shaped, 10-15 mm long and 2-3 mm wide.
Seeds: Pear-shaped, reddish-brown.

Subspecies, varieties, forms and cultivars of plants belonging to the Mammillaria parkinsonii group

Notes: There is a lot a confusion about this species, hunt and Anderson consider it a form of Mammillaria perbella which forms dense clumps by dichotomous division, but it is clearly evident from the photos showed in the original description by Craig that they are not exactly the same. The M. cadereytensis is actually considered (Pilbeam) a short spined variant of Mammillaria parkinsonii.

Cultivation and Propagation: This plant is easy to cultivate but very slow growing. Cultivate it in a well drained and mineral substratum. Water regularly, avoid the use of peat or other humus sources in the potting mixture. It need full sun, so it keep a compact and flat shape. It does not tolerate intense cold, but tolerates some cold if kept dry. Frequent transplantations of the young plants protect the lower part of the stem from the lignification, to which the plant has a tendency.
Reproduction: It is propagated by seed. Sometimes old plants divide at their apex, ramifying dichotomously - to form two or more distinct joints - but the removal of one of these joints may prove fatal to the plant.