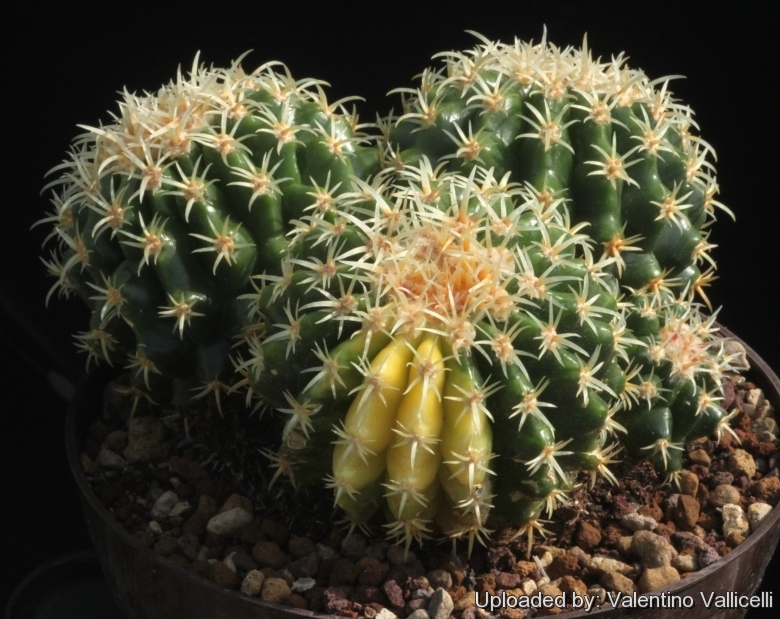 Description: This is an eye-catching variegated cactus that always make a spectacular attraction. This plant differs from the common Golden barrel cactus (Echinocactus grusonii) for the spines that are stout but intermediate in length between the standard from and the short spined type "brevispinus". The variegated plants have yellow sectors that contrasts nicely with the normal green epidermis.
Habit: Except for the spines it is identical in shape and size to the standard species.
Stem: Single, slowly growing, heavily ribbed, globe-shaped becaming elongated (barrel-shaped) in maturity, green with yellow variegation, up to 90 cm (180 cm) in height and spread. They normally offset with advanced age and a few multiples occur even at small sizes.
Areoles: Numerous, closely set the becomes almost adjacent at maturity.
Spines: Yellow, intermediate in length between the standard from and the short spined type "subinermis" (syn. brevispinus), stout, spreading and nicely curved toward the body.
Flowers: Flower are diurnal, vivid yellow (4-5 cm wide) and form a circular ring at the top of the plant, but are not very visible being small in relation with the size of the barrel, and lost into the creamy coloured wool at the plant apex.
Blooming season: The flowers are produced from end of spring to summer only on larger mature specimens receiving enough full sun.

Notes: A variegated plant has sectors, patches or stripes with two or more different colours, even distinct shades of green. Plants with variegated stems or leaves are often attractive and highly prized. In most species the stems or leaves are normally green, and variegated epidermis is an uncommon mutation, termed a chimera. A chimeral variegation is due to losing the ability to produce chlorophyll in some of the plant’s tissue, so that this tissue is no longer green. Tissues lacking chlorophyll are usually white or pale yellow coloured (due to carotenoid pigments) or red (due to betalain or anthocyanin pigments) contrasting with the normal green tissue. There are several forms of variegation, depending on the tissues that have been affected. The variegation in some forms is unstable. The extent and nature of the variegation can vary, and sometimes the plant will return to the green form. In others it is stable and does not change under normal conditions. Because the variegation is due to the presence of two kinds of plant tissue, propagating the plant must be by a vegetative method of propagation that preserves both types of tissue in relation to each other. 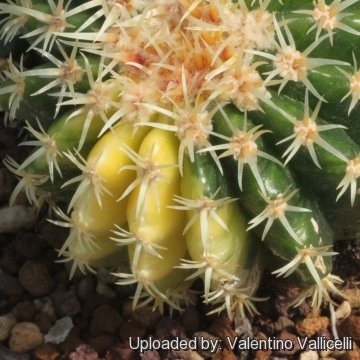 Cultivation and Propagation: This variegated form of Echinocactus is regarded as choice and rare in cultivation. It cannot tolerate prolonged exposure to direct sun light (especially during the hottest summer days), so grow it in half-shade or under filtered sun. It is often seen as grafted plant, but may grow well on its own roots, too. Use mineral well-permeable substratum with little organic matter (peat, humus). Water sparingly from March till October and keep perfectly dry in winter at temperatures from 5 to 10 degrees centigrade. (In general these plants are more tender and cannot endure freezing temperatures ) In the rest period no high atmospheric humidity!!
Propagation: Cuttings or grafting onto column-shaped cacti, unpredictably a very few variegated plants appear among normal seedling.