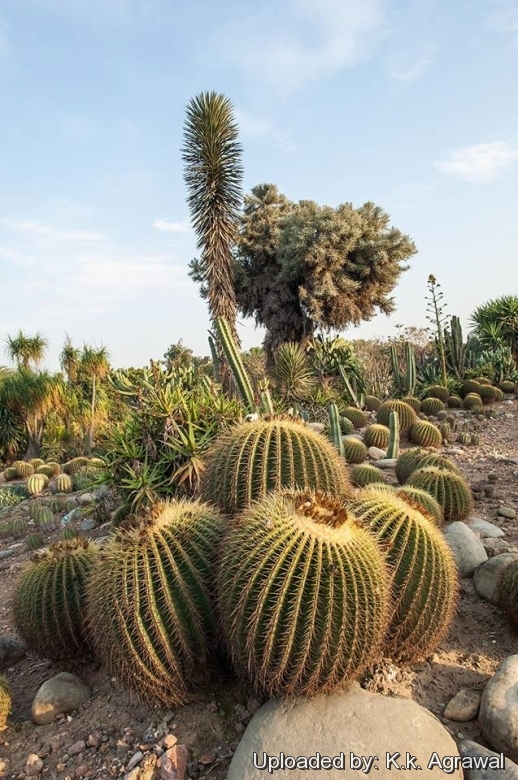 Origin and Habitat: Central Mexico. Echinocactus grusonii occurs in the Rio Moctezuma Valley (around the Zimapán Dam, Mesa de Léon ), Queretaro. A new subpopulation had been recently found in San Rafael de las Tablas, Zacatecas, the species has an extent of occurrence of approximately 4,500 km2 and there are two to four locations.
Altitude range: It grows at altitudes between 1,400 and 1,900 metres above sea level.
Habitat and ecology: The small subpopulation in Querétaro occurs on medium to steep slopes of volcanic rock near in a very small area (extent of occurrence is 25 km² and the area of occupancy is less than 10 km²). The total number of plants in the Querétaro subpopulation is estimated to be less than 1,000, the majority of which are mature. The subpopulations recently discovered in Zacatecas grow in semi-desert matorral, among volcanic rocks or calcareous soil on medium to steep slopes. These subpopulation are much larger and comprise several thousand mature individuals (the number is probably close to 10,000). The intense overcollection in its native habitat has led this plant becoming endangered in the wild, for this reason E. grusonii were the focus of an intensive rescue effort. In fact the Rio Moctezuma Valley, the native habitat of this cactus, was scheduled to be flooded after the construction of a major dam. A Mexican botanical garden hurried to remove these and other rare plants prior to the dam’s construction. Despite the fact that few plant remain in the wild today, their off-site conservation has allowed for extensive propagation by nurseries, and the golden barrel cactus is now one of the most common cacti in cultivation. Even though the two new subpopulation has thousands of individuals, there is continuing decline in the number of mature individuals due to illegal collection, as it is a very sought after species. The subpopulations are severely fragmented, and the genetic exchange between the two subpopulations is very unlikely.

Description: Echinocactus grusonii has usually a single slowly growing globe-shaped stem that became elongated (barrel-shaped) in maturity, up to 90 cm (180 cm) in height and spread. It may offset with advanced age and a few multiples occur even at small sizes.
Stem: Pale green and heavily ribbed.
Ribs: With very numerous areoles.
Radial spines: Yellow spines.
Flowers: Flower are diurnal, vivid yellow (4-5 cm wide) and form a circular ring at the top of the plant, but are not very visible being small in relation with the size of the barrel, and lost into the creamy coloured wool at the plant apex.
Blooming season: The flowers are produced from end of spring to summer only on larger mature specimens receiving enough full sun.
Remarks: Like the other Echinocactus and Ferocactus seedlings, the rib structure is not yet apparent, and they have pronounced tubercles making them look superficially like Mammillarias.

Notes: Older specimens take on an oblong shape with age. They also tend to lean to the south or southwest so that the spines can better protect the body of the plant from the harsh desert sun. In fact, desert travellers can use the plant as a compass. 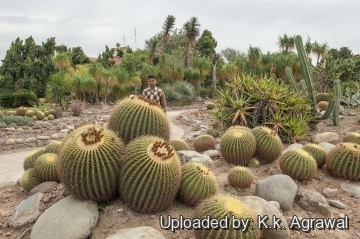 From panchkula cactus garden.Dedicated worker in the garden. Photo by: K.k. Agrawal 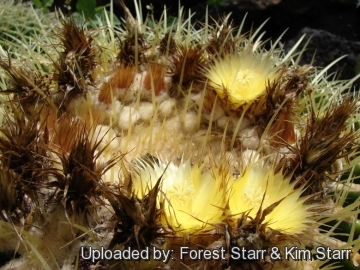 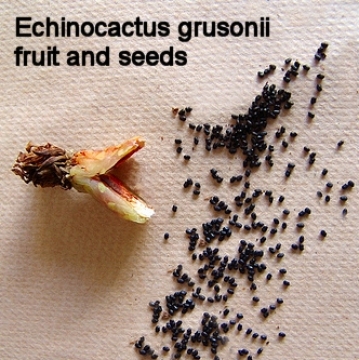 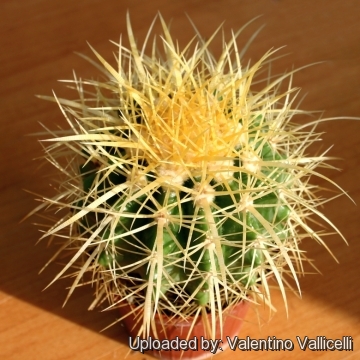 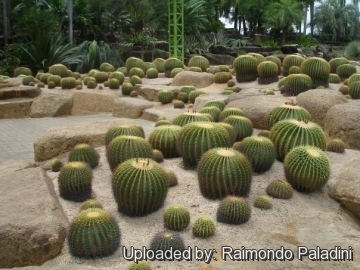 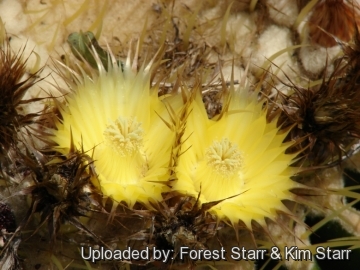 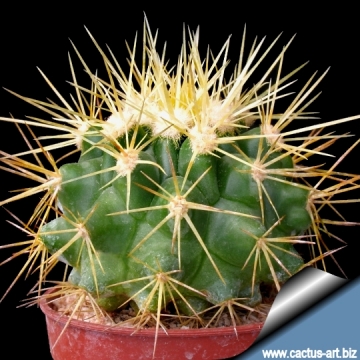 - The seedlings have pronounced tubercles making them look superficially like Mammillarias. Photo by: Cactus Art 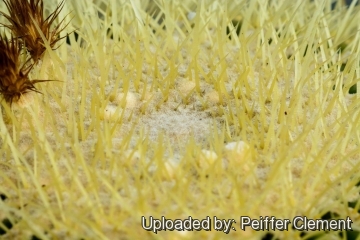 Cultivation and Propagation: Echinocactus grusonii are summer-growing and pretty easy plants to cultivate. They are suited for any rich, well drained soil such us clay, pumice, lava grit, and only a little peat or leaf-mould. If potted, repot preferably in the spring, if their roots become cramped. Generally, they should be repotted every other year in order to provide fresh soil. However, this doesn't necessarily mean they'll need larger containers. Fill about a quarter of the pot with broken crocks, gravel, etc. to promote good drainage. After repotting, do not water for a week or more. Water regularly during the aestival growth cycle (this plant need plenty of water, but do not overwater and let their soil dry out between waterings), and also needs to be avoided wetting the body of this plant while it is in sunlight. A wet cactus in the sun light can cause sun burning which can lead to scars or even fungal infections and death, keep rather dry in winter. No water should ever be allowed to stand around the roots. Feed with a high potassium fertilizer in summer.
Exposure: Outside they need a bright exposure, full sun or half shade in summer if the location is exceedingly hot or bright, inside needs bright light, and some direct sun. It can tolerate moderate shade, and a plant that has been growing in shade should be slowly hardened off before placing it in full sun as the plant will be severely scorched if moved too suddenly from shade into sun.
Frost Tolerance: Light frost protection required for safe cultivation, but can tolerate sporadic light frost.
Diseases and pests: Watch for infestations of mealybug, scale insects and spider mite. Plant in good conditions will start to bloom when reach the diameter of 40-50 cm.
Uses: Echinocactus grusonii is a wonderful popular plant for adding texture, colour and shape to landscapes, it gives a huge dose of impact. The striking round shape and the dramatic golden bright-yellow spines that absolutely light up in daylight, especially when backlit are unique. It is an eye catcher without equal. Unlike many plants, the "golden barrels" get more and more beautiful as they grow. As old specimens they can be truly majestic. They are best planted close together among large rocks or boulders.
Propagation: From seeds. Echinocactus grusonii will produce hundreds of fruits each season. Several months after the flower dies off and the pods are ripen it is possible to collect them from under the dried flower. The pods will come off with a slight twist, leaving the wool on the cactus. Use a knife to slice down one side of the pod to expose the seed and scrape them out. The seeds are mahogany or reddish amber and tiny. Then place the seeds in some water to soak overnight. Fill germination trays with a well blended mixture of 60% peat moss 40% vermiculite and one to one part of coarse sand or pumice. Use a horse syringe to suck the small seeds and some of the water into the syringe. With the syringe, distribute the seeds evenly in the germination tray, shaking the syringe so the seeds don't settle at the bottom and all come out at once. Some growers also recommend to cold-stratify seeds in a refrigerator for a year prior to sow them. But can also be used dry seeds too. Place then the trays in filtered sun, cover with a glass sheet and keep the soil moist until the seeds germinate in approximately 2 to 6 weeks. They will look like small spheres, red in colour not green. Then gradually remove the glass cover. When the small cacti start to sprout tiny spines, use a pair of tweezers to transfer them from the propagation trays into 5 cm pots filled with the same soil mix used in the germination trays. Allow the small cacti to grow for about one/two year and then move the cacti to 10 cm pots and allow them to grow further.