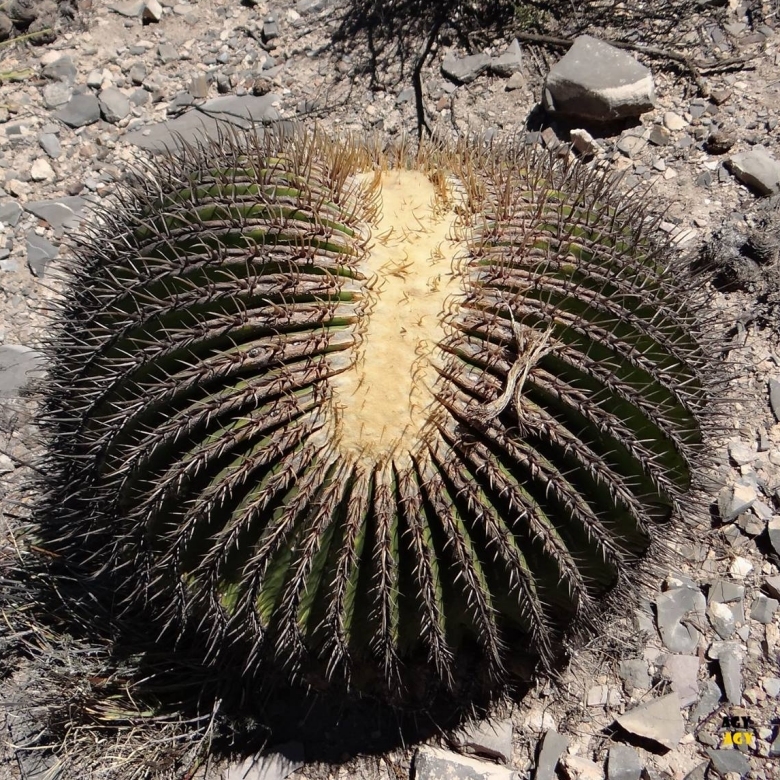 Origin and Habitat: Echinocactus platyacanthus is endemic to Mexico, is widely distributed in the southern half of the Chihuahuan Desert within Coahuila, Guanajuato, Hidalgo, Nuevo León, Querétaro, San Luis Potosí, Tamaulipas and Zacatecas. It is also distributed in the southern Tehuacán Valley in Puebla and Oaxaca, where it is relatively common. Though these crested Echinocactus platyacanthus are somewhat rare, cresting occurs naturally throughout the range of the species, and can be encountered in many other cactus species.

Description: The standard visnaga, Echinocactus platyacanthus, is a slowly growing barrel cactus known under popular name visnaga, it is usually solitary and grows huge in habitat. It could live more than a hundred years and is easily recognized because of its massive size, by far the largest of all barrel cacti. In nature Echinocactus platyacanthus has produced some extraordinary fan or twisting crested forms. These beautiful crested forms (Echinocactus platyacanthus f. cristata) are very rare in collection and highly priced for their sculptural shape and size. Older crested plant grown outdoor in the ground (in mild areas) can reach an imposing size (up to 1, or more, m tall weighing several hundreds kilograms). Flowers are produced only on the the apex of adult crested stems. In cultivation crested specimens are often grafted on stronger species, called the stock, that can be any number of different columnar cactus. The stem is grey-blue heavily ribbed with numerous areoles forming a continuous line. They are day-flowering plants with vivid yellow flowers produced in spring and summer-autumn. 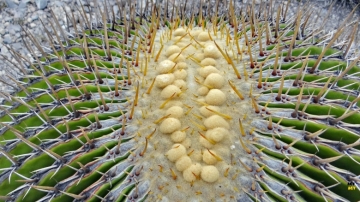 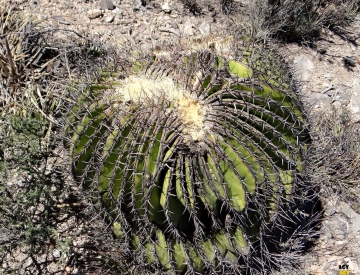 Cultivation and Propagation: Visnagas (Echinocactus platyacanthus) grow very slowly and are cold intolerant. Make sure that your visnaga are not exposed to freezing temperatures, or they may die. The plant needs a well drained soil mix. Water regularly in summer, but allow to dry fully before watering again. During the winter months they should be rather kept dry. Since they are big sized plants, they need plenty of space for their roots. Repotting should be done every other year, or when the plant has outgrown its pot.
Exposure: Light shade when young, full sun later.
Crested growth: Unlike 'monstrose' varieties of plants, where the variation from normal growth is due to genetic mutation, crested growth can occur on normal plants. Sometimes it's due to variances in light intensity, or damage, but generally the causes are unknown.
Propagation: Grafting or cuttings. Plants are usually grafted onto column-shaped cacti but proved to be able to produce their own roots if degrafted. Cuttings will take root in a minimum temperature of 20° C (but better in hot weather). Cuttings can be taken in the spring and summer. Cut the stem with a sharp, sterile knife, leave the cutting in a warm, dry place for a week or weeks (depending on how thick the cutting is) until a callus forms over the wound. Once the callus forms, the cutting may be inserted in a container filled with firmed cactus potting mix topped with a surface layer of coarse grit. They should be placed in the coarse grit only; this prevents the cut end from becoming too wet and allows the roots to penetrate the rich compost underneath. The cuttings should root in 2 to 6 weeks. Large crested piece must be placed on the soil surface without burying the plant base down in the soil.
Collapse...