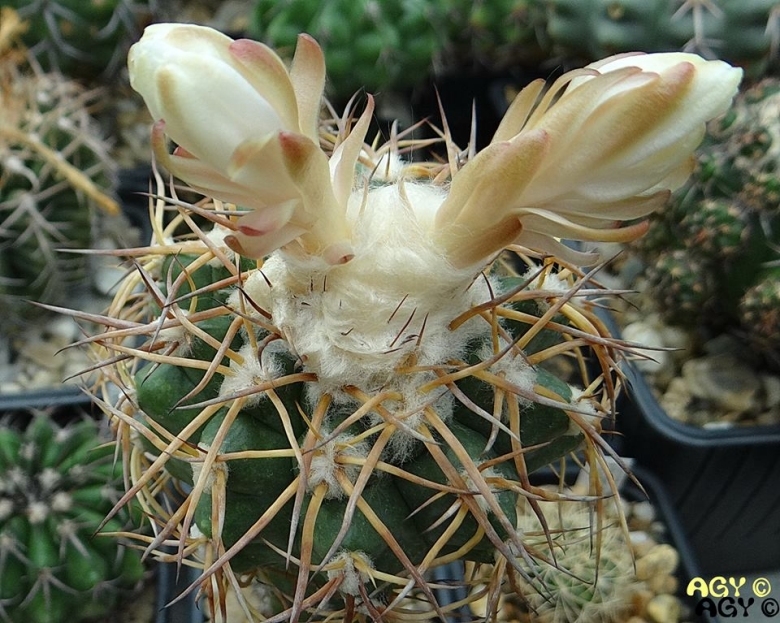 Origin and Habitat: Discocactus bahiensis is endemic to Brazil. It grows in the Rio São Francisco drainage of northern Bahia and Pernambuco; in Ceará it is found along the drainage of the river Jaguaribe, and in northwestern Piauí near the Rio Canindé. The species has a very patchy distribution; and its area of occupancy is less than 500 km2. Some subpopulations are extensive, but most of them are small and consist of less than 500 mature individuals. About 30 percent of the population has already disappeared due to habitat loss, in particular related to the construction of the Sobradinho dam and roads, as well as urbanization.
Altitude range: It occurs at altitudes between 380 and 650 metres above sea level.
Habitat and Ecology: This northern caatinga element grows on exposed, gravelly river terraces amongst limestone or iron-stained quartzite as well as in seasonally inundated river floodplains within the caatinga. Its generation length is 15 to 20 years. This species is listed as Vulnerable based on an estimated past population decline of greater than 30% as a result of the ongoing decline in area and quality of the species habitat. Some parts suffer the impact of urbanization, agriculture, construction activities, and quarrying of limestone. The species is also subject to collection. of seeds and entire plants by cacti collectors, and the stems are locally harvested for making candy.

Description: Discocactus bahiensis is a small, flattened globose to globose species to 8 cm in diameter. At first plants are solitary, with heavy spination and produces a small cephalium, a structure formed by trichomes (woolly hairs) from which emerge the tubular, yellowish-white, sweetly scented flowers. Two subspecies are recognized, the nominate form and subs. subviridigriseus, they differ in shape and length of the spines. Both subspecies may produce several offsets after making a cephalium. Discocactus bahiensis is related and sometimes synonymized with to Discocactus placentiformis.
Derivation of specific name: Bahiensis: for the occurrence in the state of Bahia (Brazil).
Stem: About 6-8 cm in diameter, somewhat flattened, dark or bluish green.
Ribs: About 10-15, but nearly hidden under the mass of spines acute and slightly tuberculate.
Areoles: Oval and woolly. Number of areoles per rib about 5 on plants with a cephalium.
Spines: Conspicuous, stout, 7 to 9, slightly flattened, somewhat curved backward, amber-, rose- to horn-coloured, 1.5 to 3(3.5) cm long.
Cephalium: Prominent, made up of a mass of white to cream/brown wool and a few short bristles.
Flowers: 4 to 5 cm long funnelform with a slender tube; perianth-segments oblong, white, tinged with yellow.
Fruit: A small, white to rose-red, naked berry.
Seeds: Globular, tuberculate. 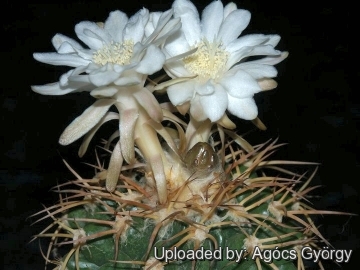 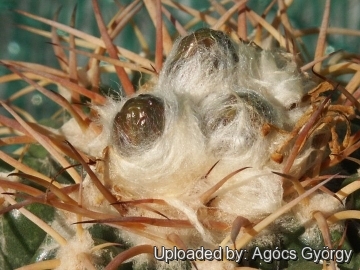 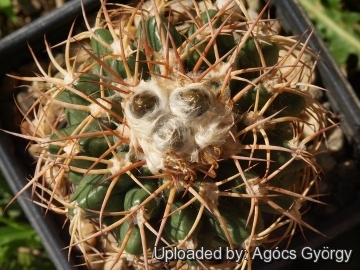 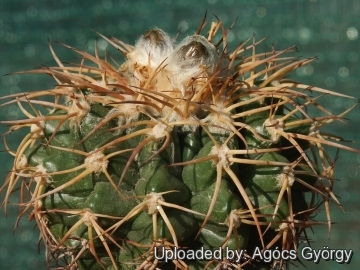