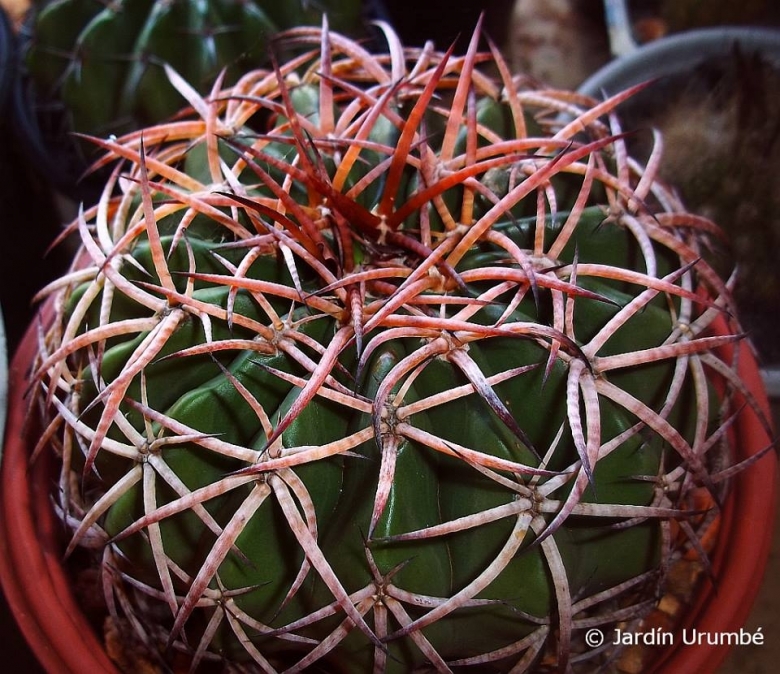 Origin and Habitat: Rio Sao Francisco near Sobradinho, west and east of Jazuaro Juremal to Curral Velho, also south of Sento Se and west of Juremal, Bahia, Brazil
Altitude range: Around 370 metres above sea level.
Habitat and ecology. Discocactus bahiensis subs. subviridigriseus was known from a single locality, although it may have had a more extensive range in the past, much of its area has disappeared beneath a great dam lake. The population was reported to count a few hundred individuals at most.

Description: Discocactus bahiensis subs. subviridigriseus (Discocactus subviridigriseus) is a subspecies of Discocactus bahiensis distinguished by a larger grey-green stem with about 13—15 ribs, rather than the usual 10 ribs of the typical bahiensis.
Derivation of specific name: subviridigriseus Latin 'sub-', almost, more or less; Latin 'viridis', green; and Lat. 'griseus', grey; for the colour of the plant bodies.
Stems: ca. 12-14 cm, 8-10 cm tall (without cephalium) grey-green.
Ribs: 13 to 15.
Areoles: Round to oval. 4 to 6 per rib on plants with cephalium.
Radial spines: 4 to 7, straight to slightly bent inwards rose-white to grey. The upward one about 1 cm long, the side- and downwards spines are up to 3 cm.
Flowers. The position of the stigma is half-way up the secondary stamens.
Fruit: Yellow-green. 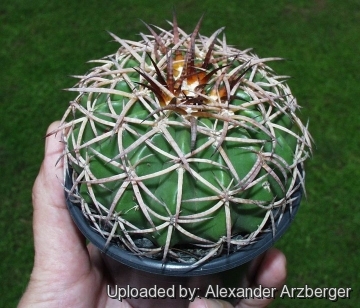