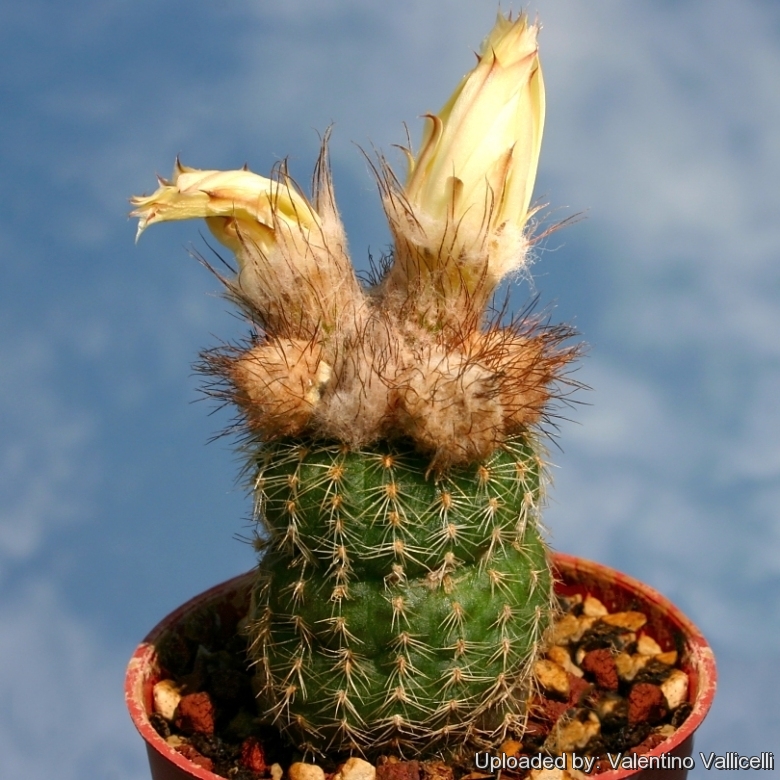 Description: Frailea pygmaea as the name implies ("pygmaeus" meaning dwarf), is a very small cactus that lives half buried in the ground. Most of the plants in habitat are single headed unless they are damaged. The "aurea" form is very nice, due to it golden-yellow spines and yellowish- or brown-tomentose areoles. The flowers are yellow and opens only during the sunniest summer days.
Root: Long tuberose, inversely conical and branched.
Stem: 2 to 2.5(-3) cm in diameter and 1.5 cm above the ground (more in cultivation) flattened, dull-green to yellowish-green, depressed at the crown, with a turbinate base. Apex partially covered with sulfur yellow spines.
Ribs: 16-18 quite flat, divided by transverse depression into very minute rounded tubercles.
Areoles: Yellowish-tomentose (brown in original description ), l.5 mm long and 1 mm wide becoming bare with time, to 5 mm apart.
Radial spines: 12-14, c. 4 mm long, golden-yellow, quite fine, partially interlocking, bristly, more or less adpressed, pointing laterally (pectinated) and downward.
Central spines: 0-1 similar to radial spines 5 mm long, more erect.
Flowers: Yellow, arising from the crown from a very woolly bud, often cleistogamous, 2 to 2.5 cm, up to 3 cm diameter, pale yellow, with dense, whitish to rose-colored pubescence outside.
Blooming season: Hottest part of summer.
Fruit: 8 mm wide and 1 cm long, round, yellowish, with bright yellowish brown wool and long dark brown bristle forming a pointed head of bristles. Bristles not pungent.The fruit wall is thick, membranous, fragile and it opens by a basal pore to release the seeds that are promptly harvested by ants.
Seeds: Helmet shaped, shining, black .
Taxonomy notes: Frailea aurea was briefly described by Backebg in 1935, however, from this time onward, most of the F. aurea collected over the years in habitat and currently in cultivations, are not forms of Frailea pygmaea, but forms of Frailea pumila! Further confusion has been added by the fact that F. Ritter in his edition "Kakteen in Sudamerika", vol. 1, Pag. 209, described a Frailea aureispina (FR 1386) and A. Buining collected a Frailea HU 89 with the provisional name Frailea pumila var. aurea. Especially the latter provisional name supported the generally prevailing opinion that Frailea aurea Backbg. (Syn. Frailea pygmaea var. Aurea) is precisely this Frailea HU 89. In the original Danish description, C. Backebg indicated as place of origin of this plant the surroundings of Montevideo in South Uruguay, but more precise indication missing, so that until today the original habitat it is not clearly known. Some plants with sulfur-yellow spines and sulfur-cleistogamous fruits matching the original description where found at “Puenta Ballena” by Prestlé in 1976; could these plants correspond to the true Fraile aurea? 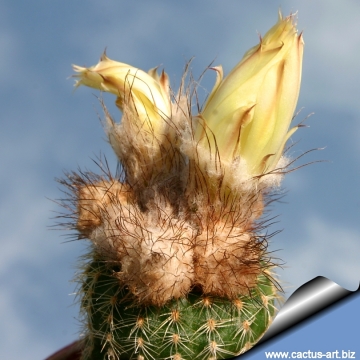 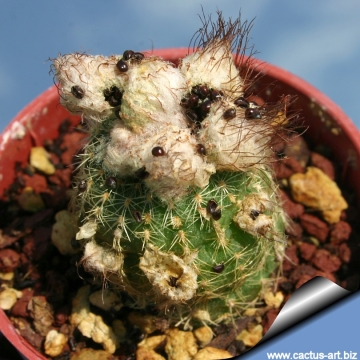