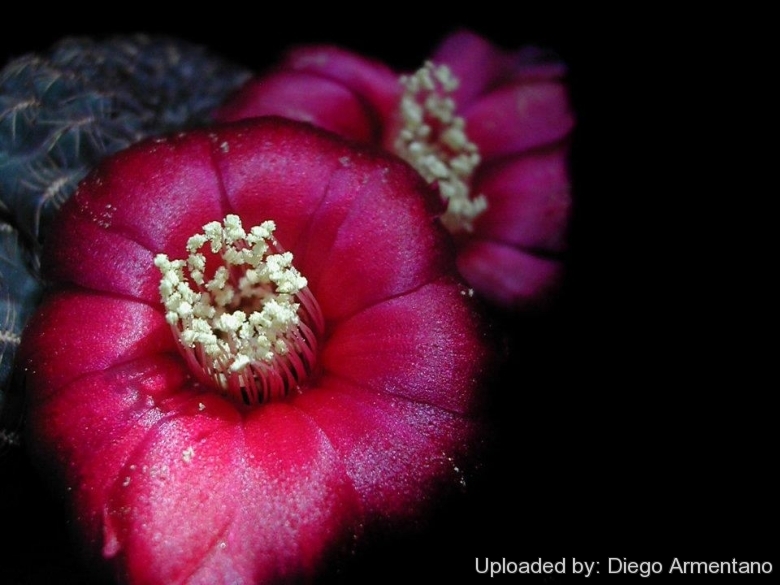 Origin and Habitat: Sulcorebutia steinbachii ssp. markusii had been reported from Bolivia, Department Cochabamba, province of Mizque, from Vila Vila, north of the town Villa Vizcarra. The distribution area of subs. markusii is adjoining that of the subspecies verticillacantha, steinbachii and krugerae to the south and south-east.
Altitude range: Arund 2400-3500 metres above sea level.

Description: Although Sulcorebutia steinbachii ssp.markusii has been considered up to now to be a good species, because of the findings of the last ten years this taxon has been identified by Gertel et de Vries (2004) as belonging to Rebutia steinbachii, but other authorities consider it a synonym of Rebutia mentosa ( E. Anderson 2001, D.R.Hunt 2006).
Habit: Described as solitary, this species reluctantly clusters in cultivation after a few years, but is slow-growing, and this and its low-growing habit suggest perhaps a harsh time in the wild.
Stems: Depressed - globose, about 3 or 4 cm tall, and to 6 cm wide, dark green to brownish violet, with from 10 to 17 ribs, spiralling. Tubercles 5 to 8 mm long.
Root: Thick napiforme c. 16 cm long, connected to the body by a narrow neck.
Areoles: Elongated 3 to 4 mm long and 1 to 1.5 mm wide with short whitish felt.
Central spines: 0 to 1 (rare in cultivated plants), 4 to 8 mm long, brownish grey to black, usually erect.
Radial spines: 8 to 12 thin, slightly curved, appressed, 3 to 5 mm long, whitish, ash-grey to brownish-black, base thickened dark-brownish, sometimes with paler tips.
Flowers: Buds dark to brownish green, growing from around the stem base. Flowers short funnel-shaped, completely open, red to purple, 40 mm wide and long, scentless or slightly fruity or mouldy. Outer perianth segments red or violet, some-times olive green with a brownish base. Inner perianth segments dark reddish violet, carmine purple sometime with a paler base. Stamens yellowish, reddish violet in the base. Pistil yellowish-green in the base, with 6 yellow papillose stigma lobes.
Fruits: Reddish-brown 6 mm in diameter, covered with brownish or greenish scales, the lower scales with fine white hairs, sometimes barely visible.
Seeds: 1.4 to 1.5 mm long and 1.2 to 1.4 mm wide. 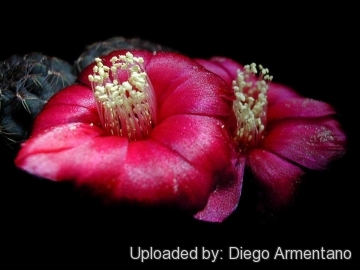 Cultivation and Propagation: It loves a very permeable, coarse mineral soil as well as to be strictly kept dry throughout the winter quiescent period since it is very sensitive to any moisture excesses, To prevent rottenness it is also advisable to surround its root neck by very rough sand or grit, this help a fast water drainage and an appropriate air circulation. Plants are quite frost hardy -5 (-10)° C
Watering Needs: Water moderately in the growing season, keep dry during the winter rest.
Frost Tolerance: Overwinter in a cool place (at 0/10°C) this is important for the flowers as well as for plants health. Without this cool winter period they normally wont get any buds.
Sun Exposure: Needs a full sun exposure (light shadow my be useful in the hottest summer days).
Propagation: Seed, cutting, grafting.