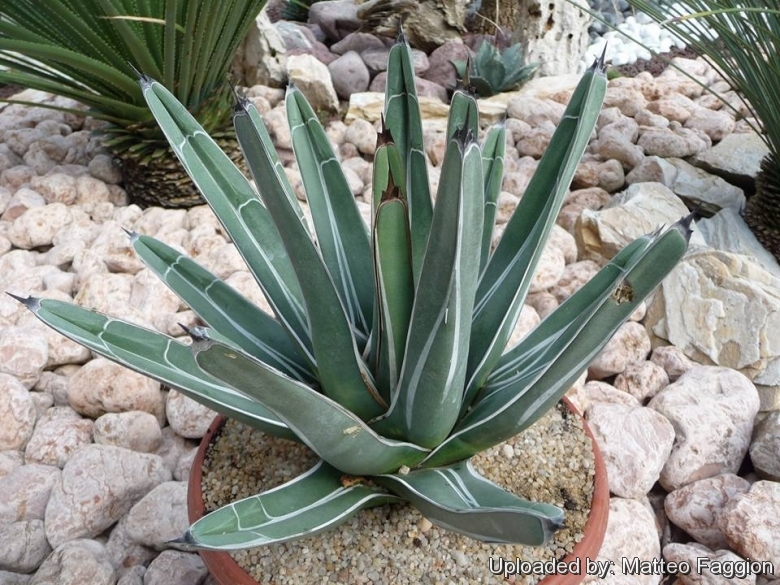 Origin and Habitat: This little century plant comes from a series of mountains north-east of Saltillo in north-western Mexico.

Description: The shapely, very beautiful Agave ferdinandi-regis (a.k.a King agave) is closely allied to the other 'royal' agave, namely the beautiful Agave victoria-reginae and often confused with it, but instead of silver colored margins has dark reddish brown edges. This small slow-growing agave is also known as Agave victoriae-reginae var. laxior or Agave victoriae-regina var. nickelsii, it is now considered by some authors (lumpers) only a variant of Agave victoria-reginae and fully synonymized with it, but these two plants looks quite distinct, there does not appear to be any 'transition' forms in nature, which one would expect to see if these two were really the same. Also this plant grows to nearly twice the size of the other.
Derivation of specific name: This plant was named in honor of King Ferdinand of Bulgaria.
Rosette: Solitary or very slow to sucker, globose, slow growing up to 45 cm tall by as width; less compact than victoriae-reginae with fewer leaves more loosely arranged, more tapering, wider and a little heavier in outline.
Leaves: About 13 cm. long, triangular, firm, very stiff, slanting upwards, deeply hollow on the upper surface, almost folded, dark green or blue green with prominent converging white lines (bud imprints) that usually form a triangle shape. The margins of the leaves are dark reddish brown and spineless tapering gradually and terminating at the blunt leaf tip in 1 or 3 (or more) dark stout spine(s) of the same colour subtending the large terminal spine, a feature never seen on Agave victoriae-reginae.
Flower: The inflorescence takes the form of a spike, from 2 to 4 metres high, containing many paired flowers of various colours, often with shades of purple red.
Blooming season: Summer. As with all types of Agave it have a long life cycle and sets flowers after approximately 20 to 30 years of vegetative growth, and the effort to produce the flowers exhausts the plant which dies within a short time. 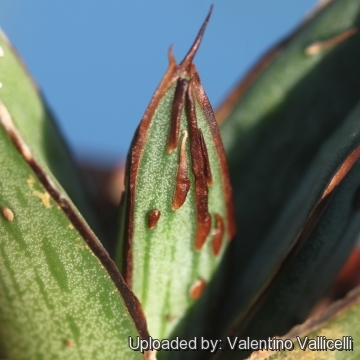 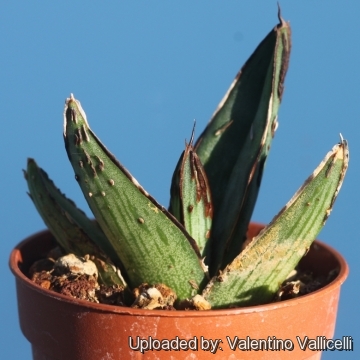 Cultivation and Propagation: It requires well-drained soil and light shade to full sun exposure, but they prefer some afternoon shade during the hottest summer month to avoid being fried by sun. It should be kept rather dry in winter or dormant season with minimum temperatures above zero in order to obtain good results,but it will tolerate quite low temperatures ( -10° C), particularly when dry. To give this marvellous plant vigour and life, water well during spring and summer and let it become barely moist between waterings.
Fertilizer: Feed only twice a year, once in April and once in July with a water-soluble potassium-rich fertilizer. Along the coast or in areas where there are no frosts, these plants may be cultivated with success outdoors where their beauty is better observed. In cold climates it is adviseable to cultivate these plants in pots in order to protect them during the winter in dry, fresh rooms. Plant Pests: Prone to mealy bugs and scale. Always inspect any new plant for pests before introducing it to your home or greenhouse. Requires good ventilation and avoid over-watering.
Propagation: It reproduces thanks to the seeds or by the suckers produced at the base of the stems in the spring. Propagate them in evenly moist soil, mist occasionally and keep in filtered sunlight until they are growing.
Uses: These plants were discovered by the Spaniards in the 17th century where the local Indians used them for fibres, food and to make an alcoholic drink like Tequila. The fibres were used to make clothing and ropes. Most of the plant was used for food, raw and cooked. Flowering stems and flowers are edible and were roasted or boiled.