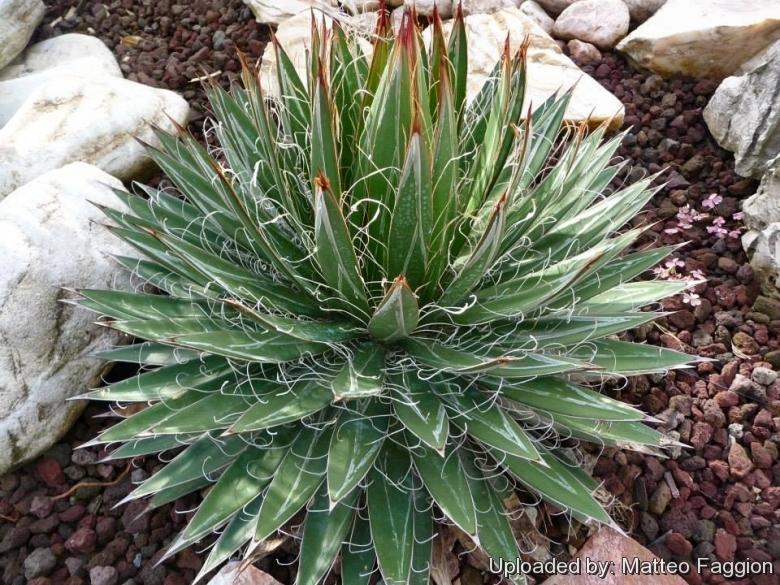 Description: Agave schidigera (Agave filifera subs. schidigera) is a small or medium sized plant that forms stemless rosette to 60 to 90 cm across and 60 cm tall. It is a very symmetrical plant with straight leaves that looks a bit like Agave filifera, perhaps having slightly wider leaves than A. filifera, but stay mostly solitary or suckers slowly but steadily. While the A. filifera branches prolifically. Some populations of Agave schidigera have slightly curved leaves that detract from the symmetry.
Leaves: 30 to 45 cm long and 2,5 cm wide at their widest point. They are decorated with thin white curly marginal fibres spreading in all directions which sometimes are very dense. There are no marginal teeth on the leaves; however, the tip is very sharp and can inflict some damage. The leaves which vary in colour (on the same plant) from dark green to a bronzish-green colour have very ornamental white bud imprints. These imprints vary in tone and become more noticeable with age.
Flowers: The flower stalk is 3 to 3,5 m tall and is densely loaded with yellowish-green to dark purple flowers up to 5 cm long. Some send up a tall flower spike annually, while others bloom only every 30 to 40 years. Several types die after flowering, but new plants may develop from suckers at their base.
Blooming Season: Late Spring through Early Summer. 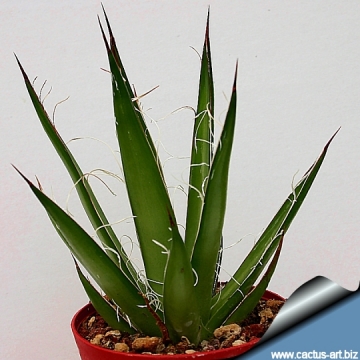 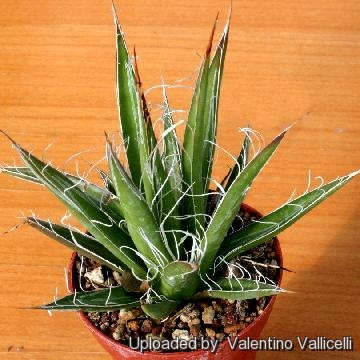 Cultivation and Propagation: Good in containers. Agave schidigera is a relatively easy-to-grow species tolerant of most soils. The only requirement is that it have good drainage and not be waterlogged. Plants have a moderate growth rate,
responding to some supplemental water during the growing season (spring through early fall). It is theoretically hardy to -7° C , particularly when dry. It is damaged from early morning overhead watering in the winter. The water froze resulting in pockmarks on the leaves. It grows fairly fast in summer if provided with copious water but allows to dry thoroughly before watering again. During the winter months, one should only water enough to keep the leaves from shrivelling. They do well in full sun or a lightly shaded area. Plants cultivated outdoors are drought tolerant and takes blasting heat and full sun. Benefit from fertilization in the spring and summer.
It is quite versatile. Because of its symmetrical form and relatively small size, this plant is very attractive when grown in pots. Plants can be grouped together or planted among boulders in a rock or cactus garden. They work well with perennials
Propagation: By suckers which often are found growing around the base of the plant, Remove the basal suckers (if available) in spring or summer and let the cuttings dry for a few days before inserting in compost or by seed.
Uses:A. schidigeraa is one of the species from which tequila is made. Rope, food, soap and other products are also made from the fibers and pulp.