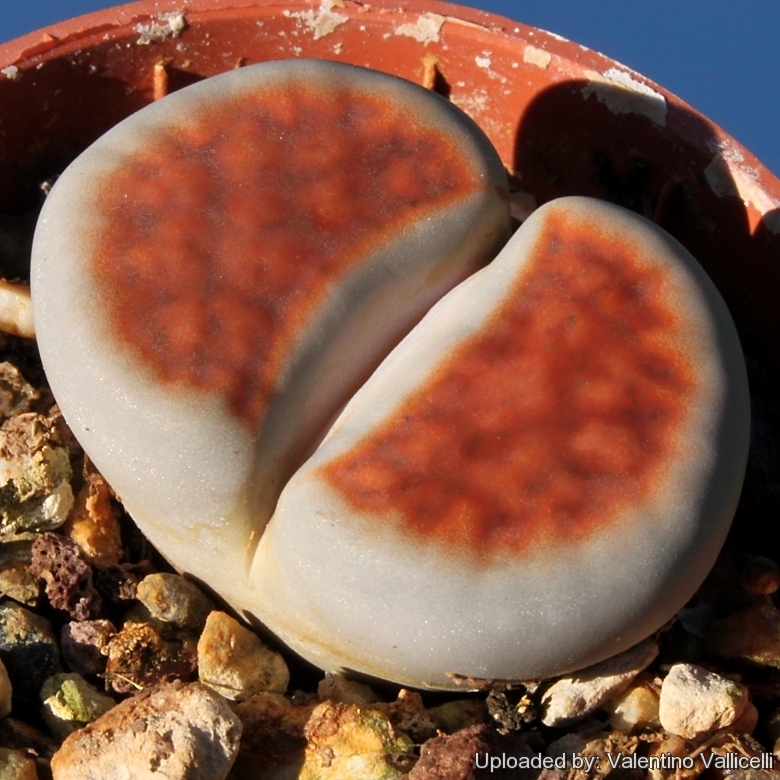 Description: Lithops karasmontana var. lateritia is one of the innumerable local form of the very variable Lithops karasmontana distingushed for the oval bodies with fissure extending right across, top surface quite homogeneous with brick-red or rusty-red tones. Flowers white. It has the same variable characteristics of the species.
Habit: Bodies solitary or in groups of 2 or more, to 3 cm high.
Stem: Almost stemless.
Bodies (Paired leaves): Inverted cone-like, divided into 2 unequal-sized, conjunct and coalescent leaves. Each 2,5-3 cm. Fissure fairly deep, 4-10 mm long. Top of lobe flat or subconvex; sides and top tinted a pale red-ochre, brick-red or bright rusty-red; window semi-opaque, surface slightly uneven, the depressions coloured darker than the ridges, which are coloured a deeper brick-red.
The plant renews itself every year or so by putting out a new plantlet from between the two lobes. Once the new plant is full sized, the old lobes shrivel up and slough off as a snake skin does.
Flowers: Big up to 4,5 cm in diameter (mostly 25-35 mm) satiny white, narrow-rayed.
Blooming season: Late summer or early autumn.
Fruit: Seed capsules mostly 5-chambered, otherwise 4 or 5-chambered. Profile boat-shaped.
Seeds: Minuscule, yellow-brown; smooth to rugose.

Notes: Lithops karasmontana is a choice example of the window-leaf ( fenestrate leaf) adaptation found in many other succulent species like Peperomia columnella, Fenestraria rhopalophylla, Haworthia truncata, Ophthalmophyllum friedrichiae, etc. These windowed plants usually grows buried in the ground with only the upper truncated portion of the thick, succulent leaves visible. Both the coalescent leaf pair of Lithops (shaped like an inverted cone) and the leaves of the other windowed plants have a more or less upright position with the leaf tips at the soil surface or protruding only a little from the soil. The leaf tips either are rounded or flattened. This windows leaf tip is free of green pigments. The greater part of the photosynthetic leaf surface, the mantle, is not exposed directly to sun light since the leaf is embedded into the soil and the solar radiation is transmitted by the colourless water storage tissue to the assimilatory tissue, so the photosynthetically active mantle gets light only from inside the leaf and not across the epidermis. Moreover this light is more or less evenly dispersed over the whole assimilatory tissue since the water storage tissue disperses the solar radiation. All species of Lithops and Ophthalmophyllum have coloured windows that matches with the colours of the soil and the pebbles of the plant's habitat. While other window plants such as Haworthia maughanii have dark green pigmented window areas. This green colour, however, does not result from a pigmentation of the window area but is the result of light that penetrates the window and is transmitted across the water storage tissue. 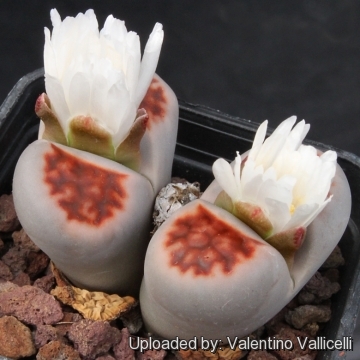 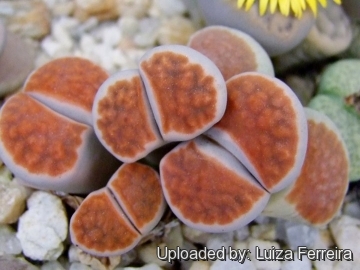 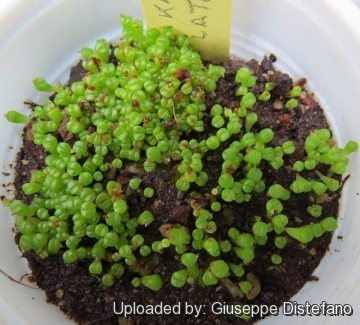 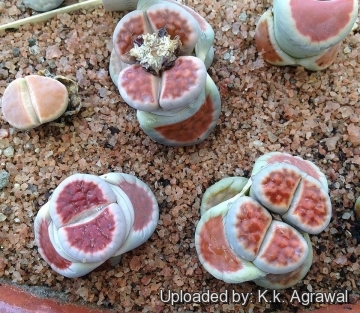 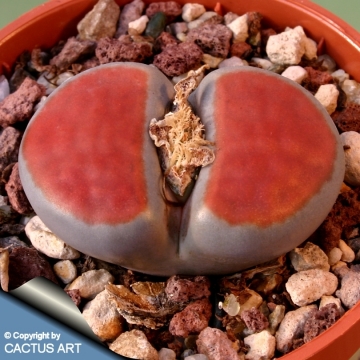 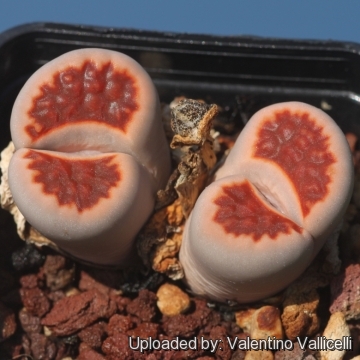 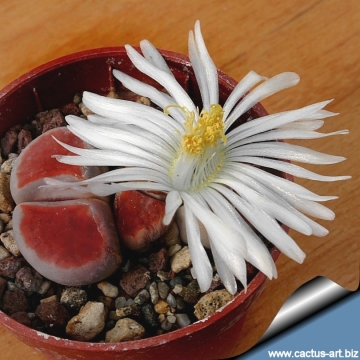 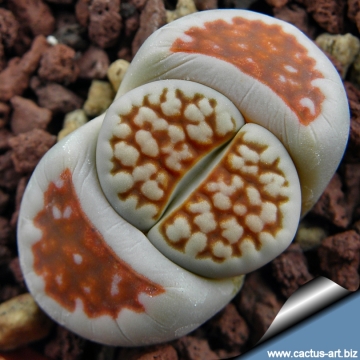 by Valentino Vallicelli
There are a total of 18 Photos.
Click here to view them all!
Cite this page: "Lithops karasmontana var. lateritia" Text available under a CC-BY-SA Creative Commons Attribution License. www.llifle.com 14 Nov. 2005. 08 Dec 2022. </Encyclopedia/SUCCULENTS/Family/Aizoaceae/12170/Lithops_karasmontana_var._lateritia>