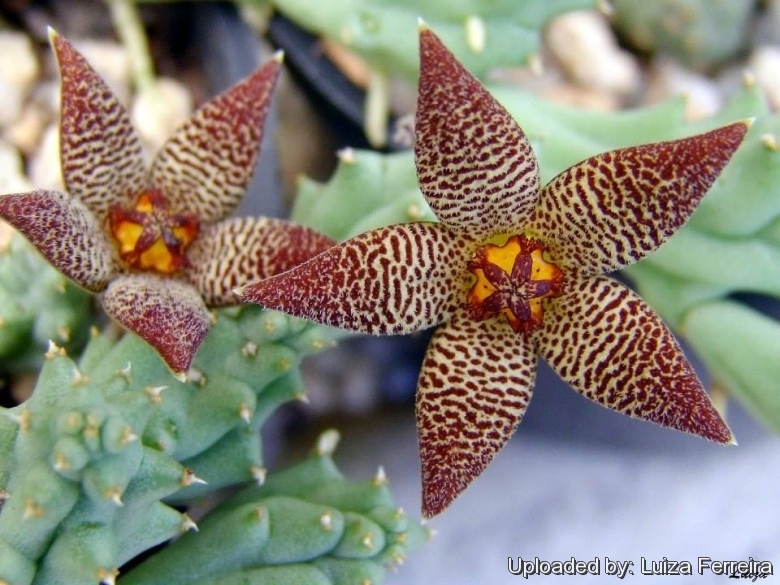 Description: Piaranthus disparilis is a very much smaller morphological or geographical form of the very variable Piaranthus pillansii. It differs in the smaller size and different shape of the corolla-lobes and the markings on the corolla, moreover in regard to its corona P. disparilis resembles P. geminatus but the crest of the corona-lobes is distinctly toothed, not merely minutely tuberculate. Flowers emit an “odour like bad vinegar,” according to Mr. Pillans. Up to the time of the publication of the monograph on the Asclepiadaceae by Dr. N. E. Brown in the "Flora Capensis," this species was only known from collectings of Mr. N. S. Pillans. Piaranthus disparilis mentioned in old literature and sometimes offered in plant lists, should be fully synonymized with Piaranthus pillansii.
Stems: Creeping, consisting of distinct more or less club-shaped joints, angled, “almost cylindrical, same colour as the flowers” (Pillans) similar to those of Piaranthus comptus or Piaranthus geminatus.
Flowers: 1 to 3 in a short inflorescence, about 18 mm to 20 (or slightly more) mm in diameter, star-shaped, below the tip of stems; pedicels terete, glabrous 6-30 mm long. Sepals 2-3 mm long, lanceolate or ovate, subacuminate, recurved at the tips, glabrous. Corolla rotate, without a distinct tube nor exceding 2-5 mm long. Lobes 8-10 mm long, c. 2 mm broad at the base, lanceolate, acuminate, gradually narrowing upwards, obtuse, convex from the margins being slightly recurved, glabrous on the back, velvety-hairy above, not ciliate, “pale pinkish-purple, finely marked with transverse pale yellow lines” (Pillans). Corona-lobes 1.5 mm long, closely incumbent upon the backs of the anthers and the upper incumbent portion about 0-5 mm long, with the tips very slightly turned up, yellow, without markings, lanceolate or linear-oblong, entire or more or less distinctly 3-toothed at the apex, with the middle tooth much the longest and acute, dorsally produced at the base into a subquadrate crest, truncate and distinctly toothed at the top. 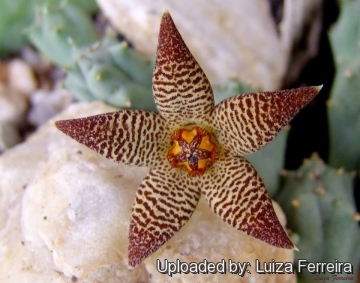 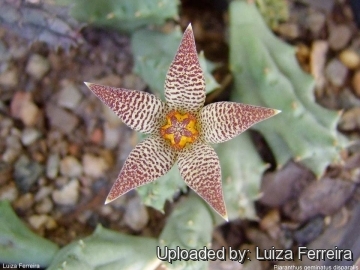 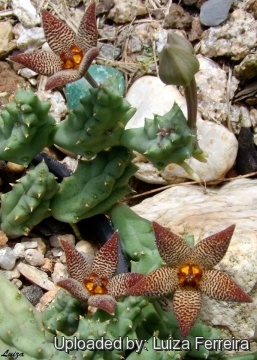 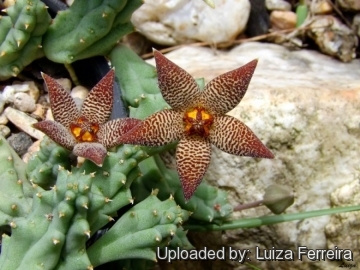