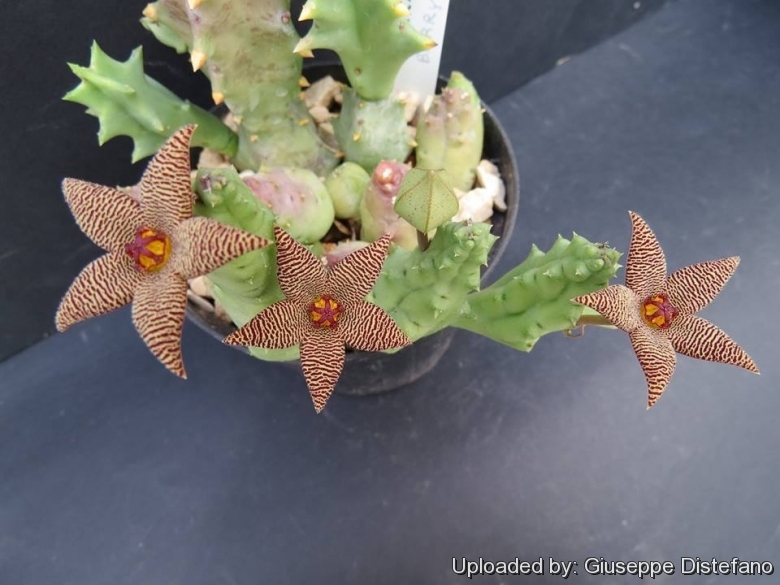 Description: As the name implies this species comes from around the town of Barrydale in the Little Karoo region of the Western Cape Province. It is closely allied to the Piaranthus geminatus/Piaranthus foetidus complex.
Habit: Clumping and prostrate species that spread over the ground forming large cushions. Vegetatively Piaranthus is indistinguishable from Duvalia when not in flower. This is due to their having the same habitat preferences, both being mat forming under host plants.
Stems: Procumbent or ascending, divided in short cylindrical articles 4-angled, with 2-4 minute teeth along each angle. Surface smooth or slightly rough, light-green tips faintly purple.
Flowers: 1 to 3 (rarely more) in a short inflorescence.
Flowers: 13-42 mm in diameter, star-shaped, more or less pubescent, and velvety the colour of the open corolla varying from whitish to yellowish with brown-red dots or transverse lines margin recurved. Corona yellow, and red. Tube absent. Peduncles 2-20 mm long x 1-2 mm in diameter, sepals 2-4 mm long.
Blooming season: Produces numerous flowers simultaneously in October.
Taxonomy remarks: The genus Piaranthus is a very confusing complex of extremely nearly related species with many intermediary forms growing together in many widespread localities and they are very difficult to distinguish. Also experienced botanist found difficulty to separate and classify reliably the various species and forms. 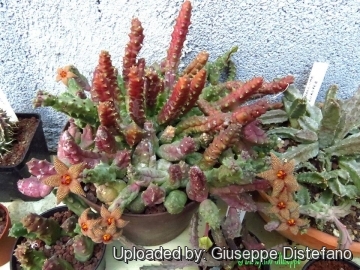 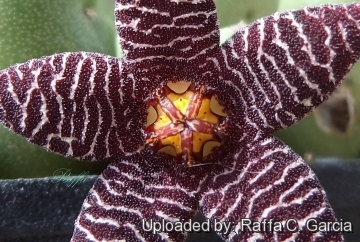 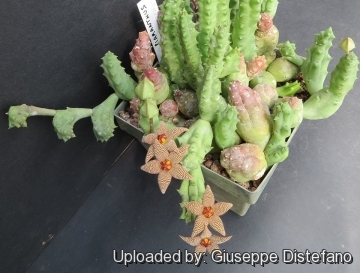 Piaranthus barrydalensis Photo by: Giuseppe Distefano
Send a photo of this plant.