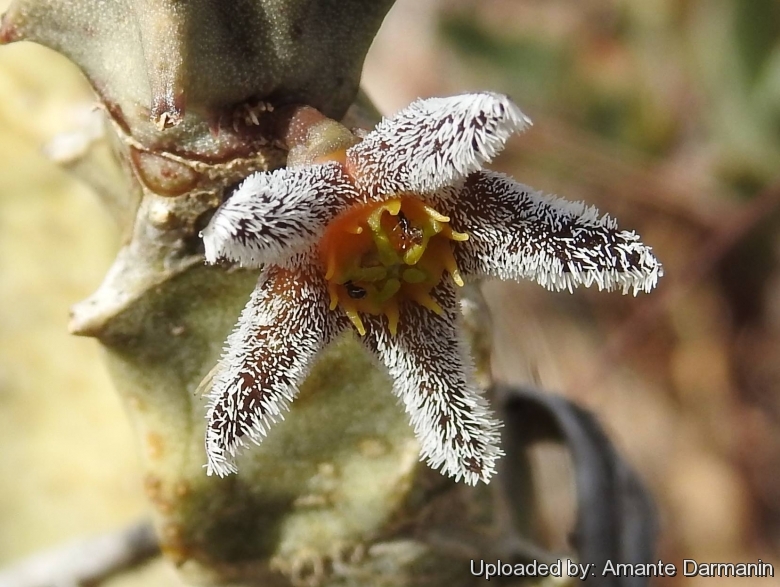 Origin and Habitat: Caralluma burchardii is endemic tu the eastern islands of the Canary Islands, Spain (Fuerteventura, Lanzarote, Lobos and La Graciosa), though a variety is found in North Africa. Population about 3576-7670 individuals.
Type locality: Canary Islands: northern part of the island of Fuerteventura.
Habitat and ecology: This species is confined to arid fully exposed places together with succulent shrubs.

Description: Caralluma burchardii (a succulent belonging to the family Asclepiadaceae) is an erect shrubby perennial herb, with xerophytic features and cactus-like appearance. It has rather tall, strong stems forming heaps, to 50 cm tall and 60 cm in diameter, with slender subterranean runners. Unlike many blossoms of stapelias which grows on the ground, this caralluma flaunts its colours as from a mast near the top of the stem. The flowers are smaller than in some of the other carallumas and the petals are very hairy on the inside.
Derivation of specific name: This species is named after Oscar Burchard (1863-1949), a German botanist who lived a long time in Tenerife.
Stems: Succulent, erect, unbranched, (7-)15-30(-50) cm long, 1.5-2.5 cm thick, acutely 4-angled, green to light grey, sometimes weakly spotted with reddish, apically 4-ribbed, after flowering increasing in diameter and thus extremely irregularly shaped; angles toothed; teeth (rudimentary leaves) 1-1.5 mm long, curved downwards, broadly deltoid and appearing only on very young shoots. The plant spreads by means of slender subterranean runners forming clumps.
Inflorescence: 3- to 9-flowered fascicles near the apex of the stems, sessile.
Flowers: Hermaphrodite. Pedicels 1-3 mm long.Sepals 3 mm long, 1 mm wide, lanceolate, acute, glabrous. Corolla rotate, 13-16 m in diameter, deeply divided, flat or weakly campanulate caused by the slightly erect lobes, who containing the elongated corona, inside olive-brown to ochre, without spots, with white hairy, outside olive-brown. Lobes 4 mm long, 3,5 mm broad, oblong-ovate, acute. Margin slightly revolute, inside densely pubescent, hairs whitish-translucent, thick, cylindrical, giving a shaggy appearance to the flower, rarely glabrous. Corona yellow, deeply tubular (similar to Caralluma quadrangula and Caralluma cicatricosa); Outer corona cup-shaped, 10-toothed, yellow; teeth 1mm long, erect, subulate; Inner corona: lobes yellow, 1 to 1.25 mm long, incumbent on the anthers and them, linear, obtuse. Anthers 0.6 - 0.8 mm broad, distinctly separate from each other. Nectar cavities deeply sunken into the flower tube. Pollinia 0.5 x 0.4 mm, translator wings 0.1 mm.
Fruits: Typical twin seed horns (follicles) 7 to 8 cm long, 7 to 8 mm thick, terete,  acute, glabrous, green striped with purple. When the follicles are fully-matured they burst open to release the seeds, each of which has a tuft of hair (or coma).
Seeds: 6 mm long, 3.5 mm broad, oblong-obovate, flat, broadly margined, glabrous, pale brown.
Chromosome number: Caralluma burchardii is is now divided into two taxa, the dodecaploid ssp. burchardii (2n = 132 chromosomes), endemic of the Canary Islands, and ssp. maura, a hexaploid (2n = 66 chromosomes) from the west coast of Morocco. The high ploidy levels involved, is the highest known in the Asclepiadaceae. 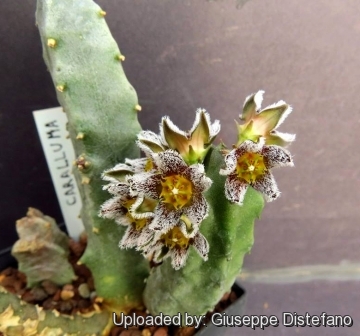 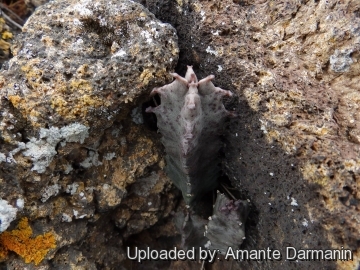 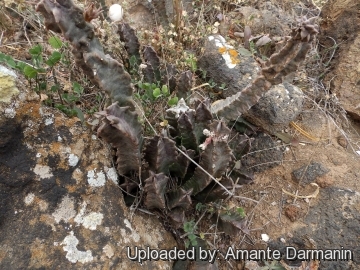 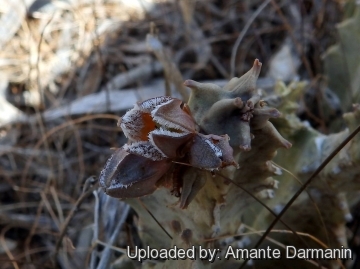 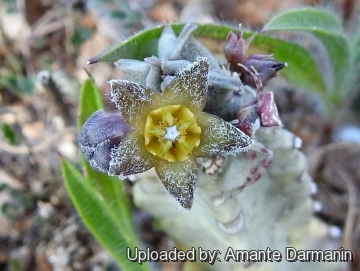 In habitat. Notice a crab spider that seems to have adapted to this plant by taking the colour of the calyx. Photo by: Amante Darmanin 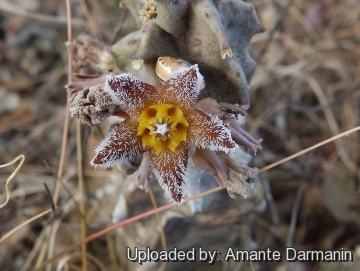 Notice a small fly near the flower. Near Guatiza, Lanzarote. Photo by: Amante Darmanin 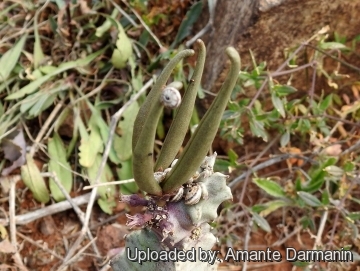 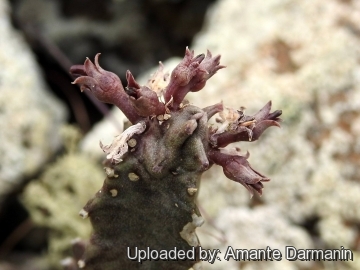 Cultivation and Propagation: Caralluma burchardii is xerophytic and adapted to dry soils, but despite its provenance it is without doubt an easy species to grow and not difficult as commonly supposed. In cultivation it can be grown as a hanging basket where it will happily flower.
Growth rate: It is a relatively rapidly growing and easily flowering species that will make large clumps given the best conditions. Most plants will offset readily, and clumps can be produced in a few years.
Soils: It likes very porous mineral cactus mix soil, pH 7,5 to 8,5 (mildly alkaline), but can become too elongated if compost is too rich.
Repotting: This plant needs plenty of space for its roots, repotting should be done every other year or when the it has outgrown its pot. Use pot with good drainage.
Watering: It needs regular watering, especially during the hottest summer days; provide also some light watering if the green house temperatures in winter are elevated. Either excessive or very scarce watering can induce rot.
Fertilization: Feed with a high potassium fertilizer in summer.
Frost Tolerance: Reputedly resistant to light frost if kept on the dry side prior to, and during, cold weather (hardy to -2 C ° C, or less for short periods), but for safe cultivation it is best to avoid freezing temperatures. In the rest period no high atmospheric humidity!!
Sun Exposure: Best for half-shade but grow well in full sun and full shade too. Tends to bronze in strong light, which encourages flowering, but is likely to suffer from sun scorch or stunted growth if over exposed to direct sunlight during the hottest part of the day in summer.
Diseases: This species is more resistant to cryptogamic diseases than others and is quite resistant to the “Balck spot” disease of Asclepiads. Rot it is only a minor problem with carallumas if the plants are watered and “aired” correctly. If they are not, fungicides won't help all that much.
Uses: It is an excellent plant for container growing. Cascading, clustering, great for a hanging display. Stems may possibly become purple and limp in winter, but revitalize in early spring. It always looks good and stays small. It look fine in a cold greenhouse and frame or outdoor in a rockery.
Propagation: Seeds and cuttings. Cuttings will root only in hot weather. Cuttings must be kept very dry to root. Seeds germinate readily if they are sown when fresh.