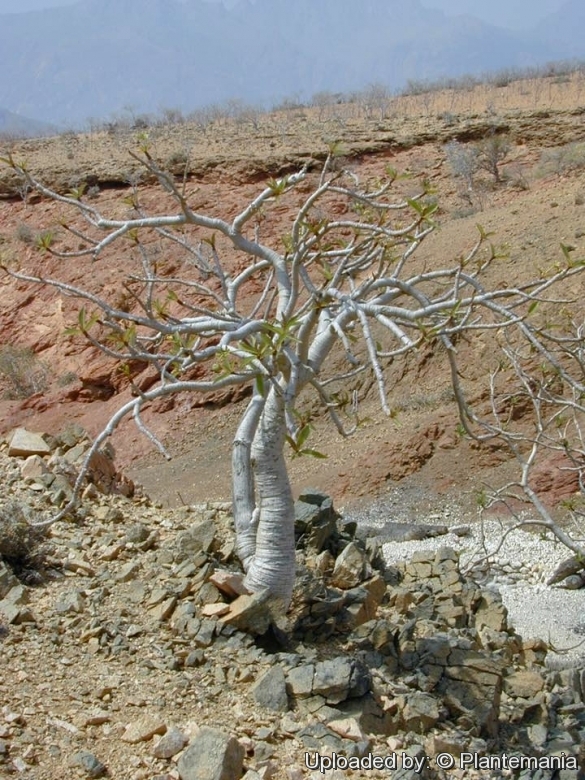 Origin and Habitat: Yemen (Socotra)
Altitude range: 700-1,050 above sea level.
Habitat and ecology. Jatropha unicostata grows in semi-deciduous Adenium socotranum shrubland on the limestone; rare on the granite of the Haggeher. This shrub is perhaps one of the most common and dominant species on Socotra, but, like Adenium socotranum, is surprisingly absent from the adjacent islands. The close association between the two species is probably due to their apparent preference for, or ability to cope with, coarse rocky substrates. Numerous regeneration niches exist in such substrates, offering the seedlings protection from trampling and affording them some degree of shade. The seeds of both species germinate readily after rainfall. Furthermore, it is important to point out that both species are highly toxic to domestic livestock and as such are rarely browsed. Jatropha unicostata are left largely undamaged by goats. J. unicostata shares this habitat with other caustic latex-producing spurges including Euphorbia arbuscula and Euphorbia spiralis. The most distinct variation is a prostrate, gnarled form found on windswept areas found on exposed parts of the south west limestone plateau. Comes into leaf after rain: on the southern side of the island in response to the summer rains (June to September) of the Southwest monsoon; on the northern side of the island in response to the winter rains (October to January) of the Northeast monsoon.

Description: Jatropha unicostata is a spineless pale-barked woody shrub or small tree up to 1.3-2 m high. It has shiny green leaves and seems to be most closely related to Jatropha mahafalensis from the south-western part of Madagascar. It is the only endemic member of this genus on Socotra.