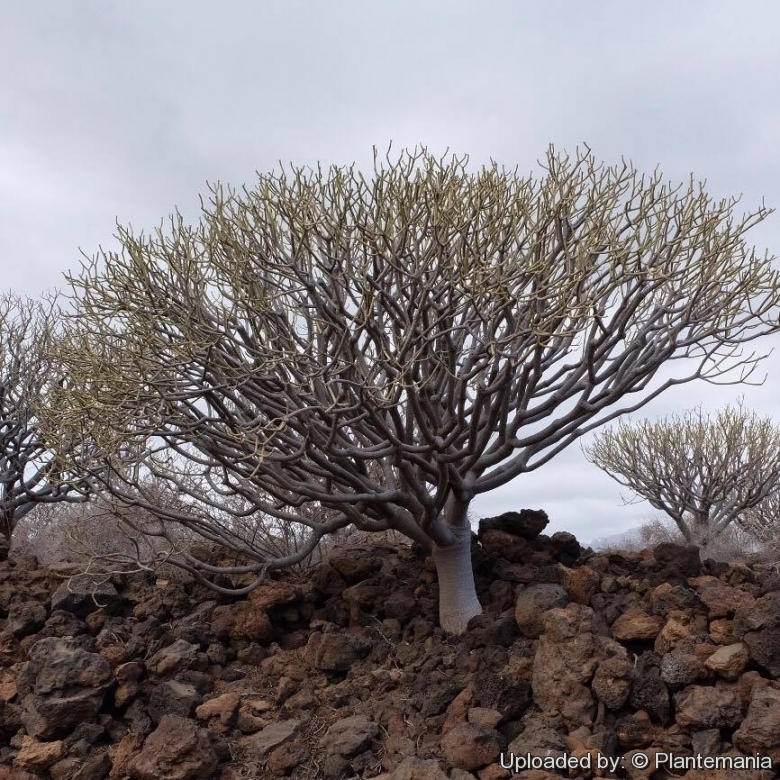 Origin and Habitat: Western Canary islands, Spain( El Hierro, La Palma, La Gomera, Teneriffa), Mauritania and South-West Morocco. In Tenerife this species can be found on the north coast in the Orotava Valley, Bu ena Vista and Masca. From Puerto de la Cruz, it can be discovered on the coastal path to the Playa del Bollullo, where it colonizes several smaller barrancos. On the east coast of La Palma, this species extends from Santa Cruz via Mazo to Fuencaliente, in the north there are beautiful stocks in the Garafia region. On La Gomera you can see the plant mainly in the Gran Rey Valley and on El Hierro and also in La Dehesa in the neighborhood of the famous Juniper trees.
Habitat and ecology: Euphorbia lamarckii is a widespread species that grows from near the sea in the lower slopes of coastal hills to the pine forest region at altitudes up to 1000 metres. It occurs together with Euphorbia balsamifera, Artemisia thuscula and Kleinia neriifolia (syn. Senecio kleinia)

Description: With a height of 0.8-2.5 metres, Euphorbia lamarckii is one of the largest Canarian spurges that forms large shrubs or small trees with woody trunks. Its nomenclature has been controversial. E. lamarckii Sweet is the name that according to the last list of wild species of the Canary Islands, should prevail over that of Euphorbia obtusifolia Poir. and Euphorbia broussonetii. It belongs to the group of endemic shrub species. It differs from other species by its pedunculated, umbelliform and usually compound inflorescences, yellow-greenish in colour and because the floral bracts fall off before the fruit ripens. The yellowish-green floral bracts and narrow lanceolate leaves with rounded tips are very similar to the king Juba spurge (Euphorbia regis-jubae) that spread on the eastern islands, but their distributions do not overlap.
Derivation of specific name: This species bears the name of the French botanist and zoologist Jean Baptiste de Lamarck (1774-1829), who became one of the most influential biologist by introducing the term "biology" and an early proponent of the idea that biological evolution occurred and proceeded in accordance with natural laws.
Stems: Light brown, old basal stem parts more or less thickened, with dark slightly rough bark; Branches in whorls, fleshy.
Leaves: Densely crowded at branches tips, linear, to 75 mm long and 6 mm wide, glaucous, sessile.
Inflorescences: The inflorescence is usually a terminal 4- to 7-rayed compound umbel, rays to 18 mm long. Bracts ovate, small. Nectar-glands elliptic, greenish-yellow, more or less 2-lobed.
Blooming season: Euphorbia lamarckii flowers in profusion in winter and spring (February to June).
Fruits: Obtusely lobed, ca. 8 mm across, glabrous. Pedicels exserted.
Seeds: The elaiosome (caruncle) attached to a seed is sessile or has only a very short stalk. 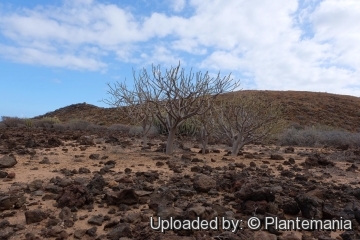 The gallery now contains thousands of pictures, however it is possible to do even more. We are, of course, seeking photos of species not yet shown in the gallery but not only that, we are also looking for better pictures than those already present. Read More...
Cite this page: "Euphorbia lamarckii" Text available under a CC-BY-SA Creative Commons Attribution License. www.llifle.com 14 Nov. 2005. 25 Jun 2022. </Encyclopedia/SUCCULENTS/Family/Euphorbiaceae/34888/Euphorbia_lamarckii>