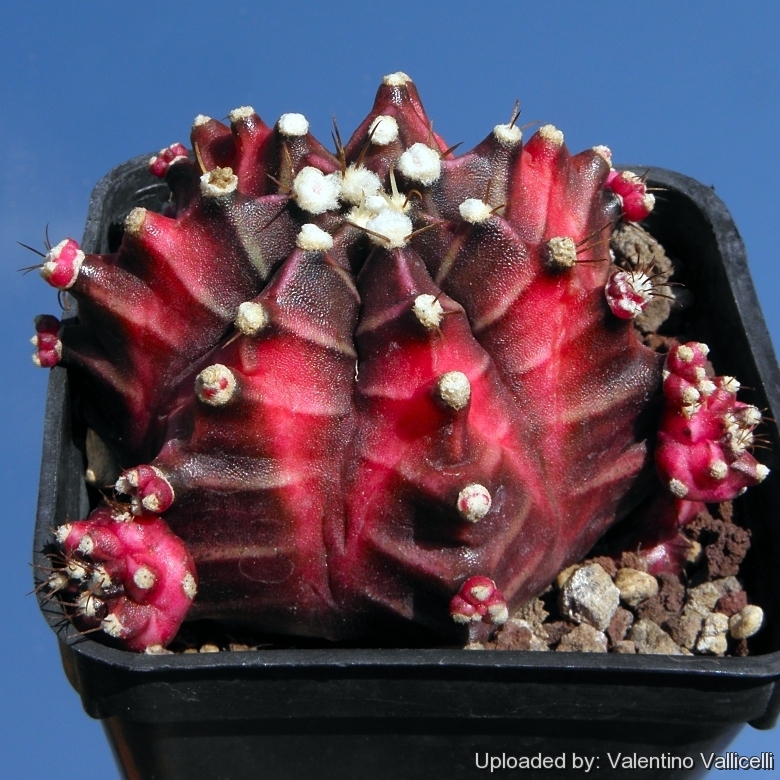 Description: Gymnocalycium mihanovichii friedrichii 'rubra', or 'Hibotan' comprises a large group of popular mutants, characterized by more or less red coloured bodies. They are red (but also orange, dark purplish, yellow or even white) because they contains few chlorophyll or even no chlorophyll at all, much like the red we see in the fall foliage of trees when their chlorophyll breaks down and disappears. Without chlorophyll many of these mutants gymnocalyciums can not produce sugar and without sugar they will die. The only way to keep them alive is to graft them onto another cactus which has chlorophyll and which will provide sugar to the mutant scion. The chlorophyll containing bottom part of the graft, called the stock, can be any number of different cactus species. In the case of the gymnoclyciums it is usually Hylocereus, a tropical cactus. The oldest and more famous mutant is the bright orange-red and completely chlorophyll-less cultivar "Hibotan" often known as the “Red Cap Cactus”, or “Ruby Ball”. While the yellow and paler forms are sometime known as “Blondie” or “Moon Cactus”.
The first red "HIBOTAN" were produced by E. Watanabe in Japan. Sowing of some thousa Gymnocalycium friedrichii yielded two bright red freak seedlings which would have died quickly had they not been grafted at once. From these have been produced literally millions of plants, distributed all over the world, by repeated grafting and cutting.”
Furthermore a number of variegated cultivars only partially de-coloured are known as "HIBOTAN NISHIKI".
Some of this colourful plants (those with some chlorophyll) are able to grow on their own roots and are very beautiful and priced by collectors.
Stem: Flattened globose to elongated globose, white, yellow, orange, red, greenish-purple, reddish brown to a dark grape colour up to 10 cm tall (or more) and 6-12 cm in diameter, often branching profusely from the sides.
Ribs: 8-14, very prominent, and sharp banded whit strong dark brown markings especially when young, and these sometimes have cross-bands of lighter colours.
Radial spines: 3-6, acicular, to awl shaped, light to dark brown, somewhat twisted, 0,7-1 cm long.
Central spines: Usually absent.
Flowers: Pale-pink to purplish-pink, 6-7 cm long.
Fruits: Gray-green to pinkish-red up to 4 cm long, diameter 1 cm. 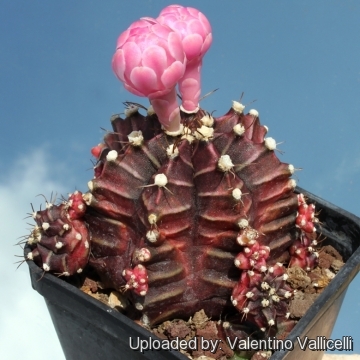 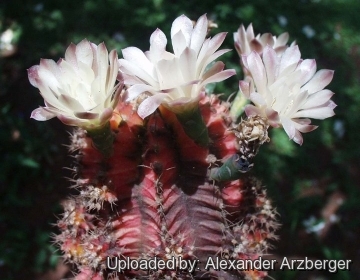 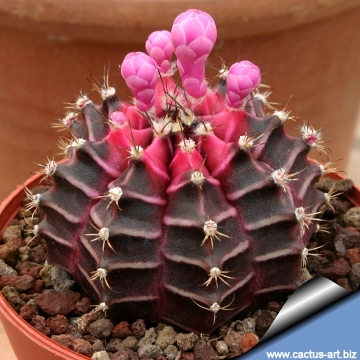 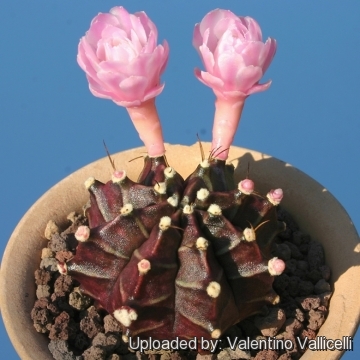 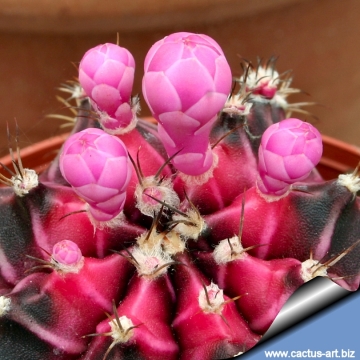 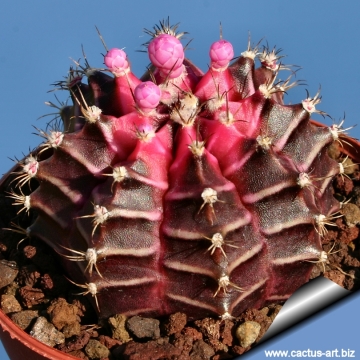