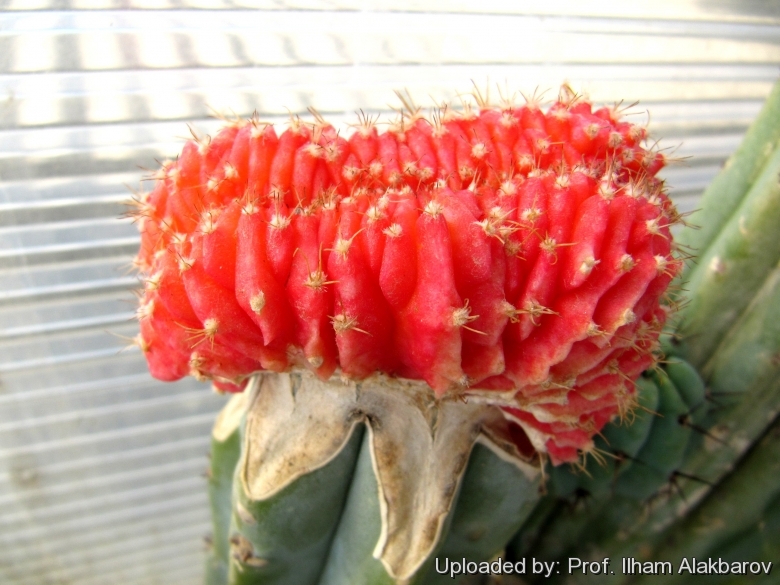 Description: Gymnocalycium mihanovichii friedrichii 'rubra'or 'Hibotan' comprises a large group of popular mutants, characterized by more or less red coloured bodies. They are red (but also orange, dark purplish, yellow or even white) because they contains few chlorophyll or even no chlorophyll at all, much like the red we see in the fall foliage of trees when their chlorophyll breaks down and disappears. Without chlorophyll many of these mutants gymnocalyciums can not produce sugar and without sugar they will die. The only way to keep them alive is to graft them onto another cactus which has chlorophyll and which will provide sugar to the mutant scion. The chlorophyll containing bottom part of the graft, called the stock, can be any number of different cactus species. In the case of the gymnoclyciums it is usually Hylocereus, a tropical cactus.
Crested form: The crested form is quite uncommon in cultivation, it is a very beautiful red plant plant with undulating fan-shaped branches.
Stem: Fan-shaped, orange, red or dark-purpl.
Ribs: very prominent, and sharp banded whit strong dark brown markings especially when young, and these sometimes have cross-bands of lighter colours.
Radial spines: 3-6, acicular, to awl shaped, light to dark brown, somewhat twisted, 0,7-1 cm long.
Central spines: Usually absent.
Flowers: Pale-pink to purplish-pink, 6-7 cm long.
Fruits: Gray-green to pinkish-red up to 4 cm long, diameter 1 cm. 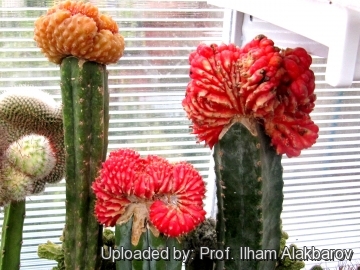