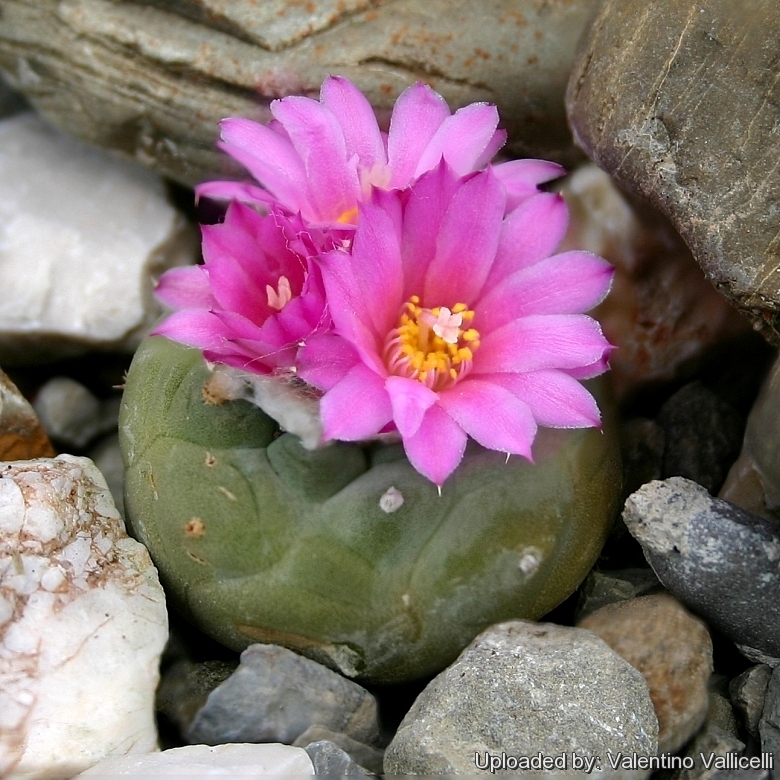 Origin and Habitat: This species has a very limited range around the lagoon near Viesca in the state of Coahuila, Northern Mexico.
Habitat and Ecology: Lophophora fricii is found growing in two very different habitats, on plains with xerophyllous scrub, mesquite and agave, and on limestone slopes and mountain tops. The species is very abundant in appropriate habitat. Illegal collecting for producing ointments poses a threat to this species.

Description: Lophophora williamsii var. fricii is a geophytic, button-like, spineless cactus with large tap root, and only the apical part of the stem exposed at soil level. The stems are typically broad and flattened, and large clumps up to 40 cm wide can be produced over time by repeated lateral branching of the original stem and its branches. It is described as differing from Lophophora williamsii in having yellowish-grey-green epidermis, a different arrangement of ribs (usually lacking well defined ribs), and seeds with a coarse testa and a compressed V-shaped hilum. Typically the flowers are carmine-red, but as demonstrated by observing plants in habitat, the colour can be much lighter than that indicated in the description.
Stem: Pale grey-green to yellow-green, usually lacking well defined ribs and furrows. The stems starts branching when a plant with a single crown reaches the size of a large saucer. Then branches (consisting of small crowns) begin to erupt from the areoles at the perimeter of the parent plant’s crown. When the new branches reach a certain size, they put down their own tap roots, making them independent of the parent plant that produced them, and then they begin to branch in turn. The result, which probably takes several decades to manifest itself and has no obvious endpoint, is a large clump of dozens of more or less connected plants, ranging in size from new branches that may be no more than a centimeter in diameter, to very large 21-ribbed plants that may exceed 10 cm across.
Ribs: 5-13( occasionally up to 21) the podaria (tubercles) are rarely elevated, but are broad and flat.
Areoles: With tufts of hairs that usually spread unequally on the prominent podaria.
Flowers: Commonly pale to dark pink (or rarely pinkish white), reaching over 4 centimetres in diameter.
Seeds. Oval , 1.5 mm long and 1.2 mm wide, with the hilum compressed into a V shape. The testa black, coarsely nodulated, with an oval tubercle structure and tubercles becoming smaller near the hilum.
Remarks: In habitat Lophophora fricii is a very mutable species. It´s hardly to find two similar plants at one location. Particularly in terms of the bloom they are different at the same locations. 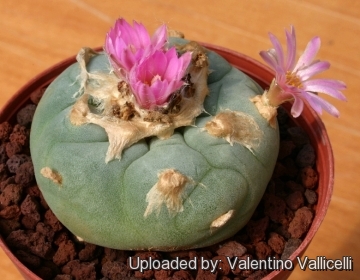 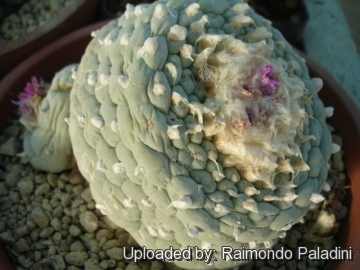 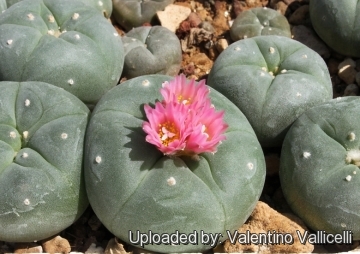 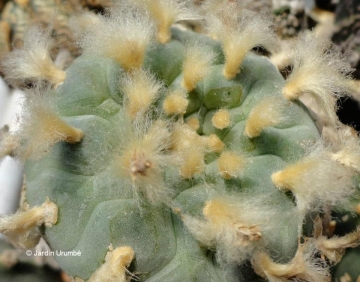 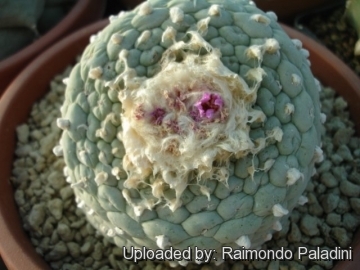 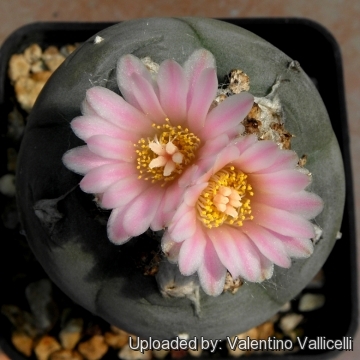 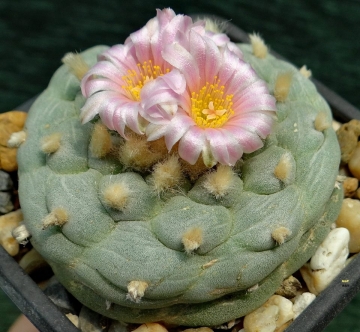 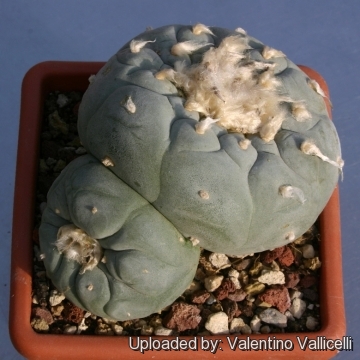