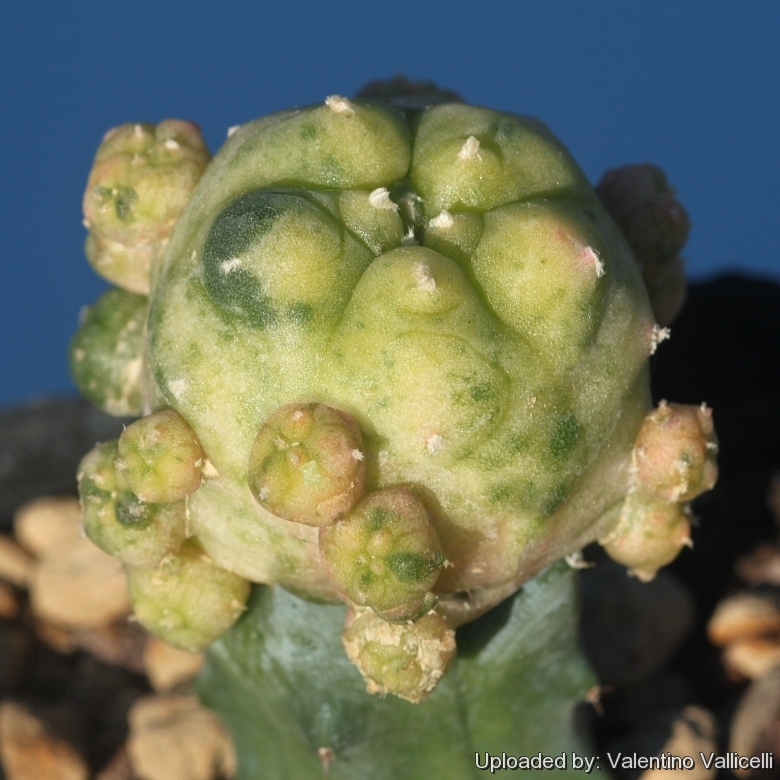 Description: The Latin word "Caespitosa" means “growing in tufts”” or “densely-clumped”, refers to the dense tufts of stems. This name is used to indicate a number of clones of horticultural origin characterized by a more or less accentuated production of axillary shoots that in age grow and form huge cushions. The plants called “caespitosa” are vegetatively reproduced and are often hybrid.
Variegate forms: Variegate Lophophora williamsii var. caespitosa are seldom available, but coveted by impassioned for the beautiful spineless body stripped in yellow-cream or pink. The odd variegate appear unpredictably in seedling batches in a small percentage, and are generally separated from normal plants. Variegated plants grow more slowly, and are generally smaller than non-variegates. Coloured areas are also generally weaker, and more susceptible to fungus, sunburn and other defects. A large well grown variegate Lophophora is truly an achievement. These are harder to grow well than they appear.

Cultivation and Propagation: Variegated and albinos Lophophora are regarded as choice and difficult in cultivation, but despite that some of them are relatively easy to grow. But be aware that they cannot tolerate prolonged exposure to direct sun light (especially during the hottest summer days), so grow them in half-shade or under filtered sun. They are sometime seen as grafted plants, but some grow well on their own roots, too.
On the contrary, the albinos can survive only if grafted on a strong green base.
Use mineral well-permeable substratum with little organic matter (peat, humus). Water sparingly from March till October and keep perfectly dry in winter at temperatures from 5 to 15 degrees centigrade. (In general these plants are more tender and cannot endure freezing temperatures ) In the rest period no high atmospheric humidity!!
Propagation: By seed or division of larger clumps, but more often they are grafted onto column-shaped cacti.