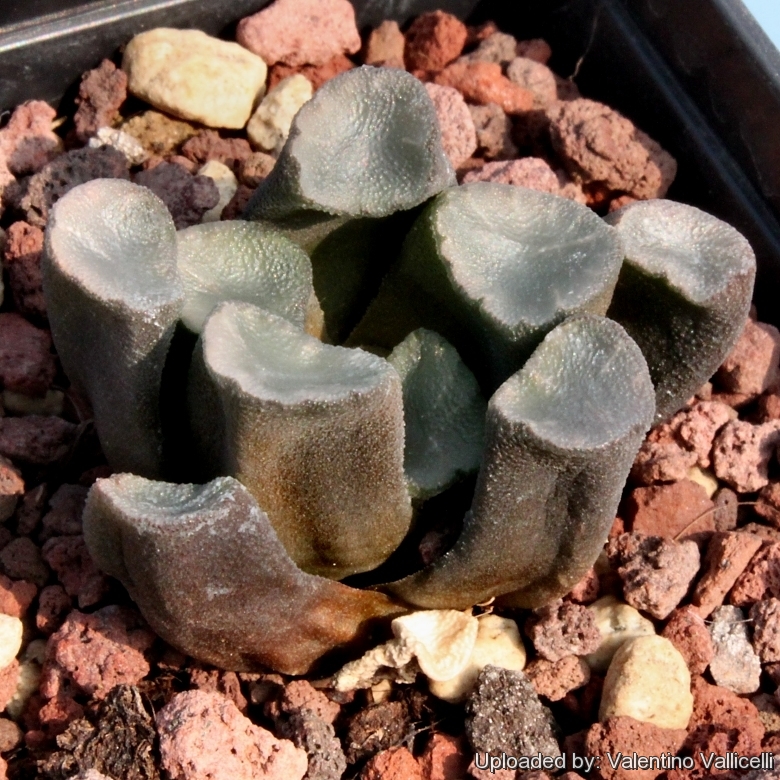 Origin and Habitat: South Africa (Western Cape: Little Karoo) South of Calitzdorp.
Habitat: It is endemic to a very small habitat within the western borders of Haworthia truncata distribution area. It grows in the shade of bushes and occasionally in open areas. It grow underground with only the apex of the leaves rising above the soil surface so that the plants are difficult to find. This is an excellent protection against herbivores . This very singular plant has contractile roots that will pull the plant into the ground during times of drought, leaving only the windowed tops exposed. It often grows together with Haworthia truncata f. crassa giving rise to intermediate forms between these two species.

Description: It is very variable species with unusual flat-topped stubby leaves windowed on upper margin. Similar to Haworthia truncata it is very wanted in cultivation and has a large potential for hybridizing.
Rosettes: Stemless, medium sized, usually solitary or very slowly proliferous (depending on the clone) with leaves spirally arranged
Leaves: Round in cross section more or less erect, up to 2,5 cm long, abruptly truncated and flattened forming an irregular, circular, scabrous leaf-tip about 1-1,5 cm in diameter which can be translucent, opaque or variously veined; margins variously crispate or undulate. In its natural habitat the leaves are borne more or less flush with the ground level, or even sunken below ground level in time of drought. In cultivation it stays above the soil. The leaf size and thickness, of the end-areas will vary greatly from clone to clone.
Fenestrate leaves: This plant is a choice example of the window-leaf ( fenestrate leaf) adaptation found in many Haworthias, Mesembreanthemums and Peperomias, the translucent 'glassy' windowed apices allow light into the internal plant body rich in chlorophyll-bearing layers of cells, thereby providing a much larger assimilation area. The windows greatly increase the photosynthesizing area by allowing light into the centres of leaves and at the same time avoiding water loss.
Remarks: This species has been the subject of passionate work of breeding and selection by the Japanese, and a number of wonderful cultivars with white lacy patterns on green-grey windowed tips have been developed and propagated, and some specimens have a very unique leaf shape.
Blooming season: Spring to summer. 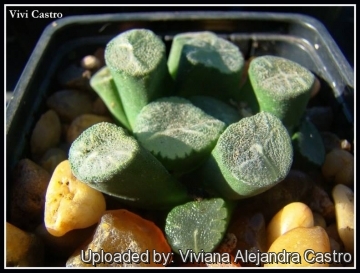 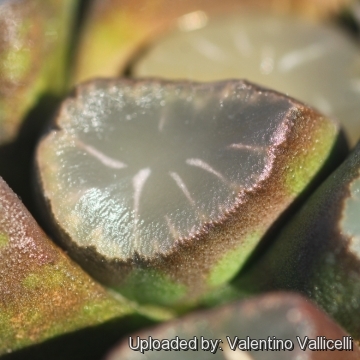 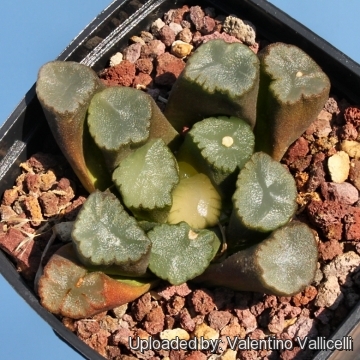 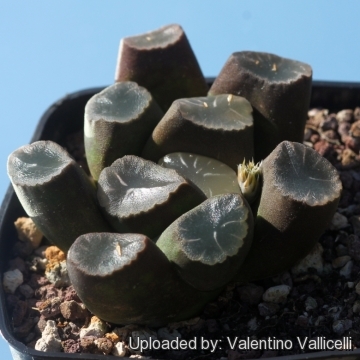 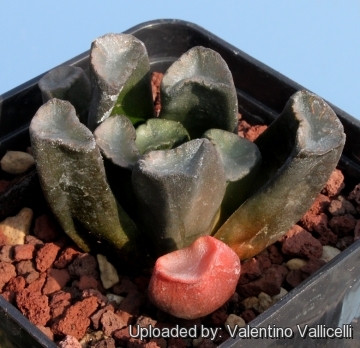 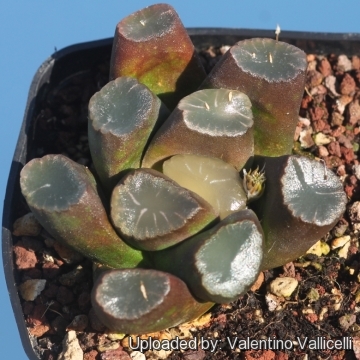 Cultivation and Propagation: Not difficult to cultivate, though it is not fast growing and takes several years to form good looking heads. Haworthias are very responsive to differing cultural conditions both as regards colour, length and shape of leaves, rate of growth and size of plant.
Soil: It grows best in sandy-gritty soil and requires good drainage as it it is prone to root rot.
Fertilization: Feed it once or twice during the growing season with a fertilizer specifically formulated for cactus and succulents (poor in nitrogen), including all micro nutrients and trace elements diluted to ½ the strength recommended on the label.
Repotting: Must be repotted frequently, because every year a part of their roots die and then rots in the pot. Needs a deep pot to accommodate the long, thick, contractile roots.
Watering Needs: Water regularly in the growing season, but avoid water-logging and let dry between watering, they should never dry out completely during the rest period. If grown in a container, bottom watering by immersing the container is recommended. It must have very dry atmosphere.
Sun Exposure: Keep cool and shaded in summer, and provide locations with diffuse sunlight or light shade, it can tolerate shade, shelter from direct sun during the hottest hours. In shade the body colour will remain more green, while full sun will darken a lot. It can be sunburned if moved from shade/greenhouse into full sun too quickly. The amount of sunlight it can withstand without scorching depends upon the how hot it becomes in the summer in the locale in which it is planted. During the spring it may be able to take full sun until the heat arrives at the end of spring. In an area that has hot afternoon sun, it may be able to take full morning sun, but requires afternoon shade or afternoon light shade.
Frost Tolerance: Light frost protection required. It requires a minimum temperature of about 5°C (But will take a light frost and is hardy down to -5(-7)° C for short periods if it is in dry soil). USDA zones 9A – 11. In areas prone to frost, grow in an intermediate greenhouse or conservatory, in pots.
Pests and diseases: May be susceptible to mealybugs and rarely scale.
Propagation: Seeds, offsetts, leaves and roots cuttings. Leave the offsets that appear at the base between the leaves attached to form a cluster, or wait until they are 1/3 the size of the parent and then detach and plant. Cuttings root easily and remain true to the species, while seeds tend to hybridize.