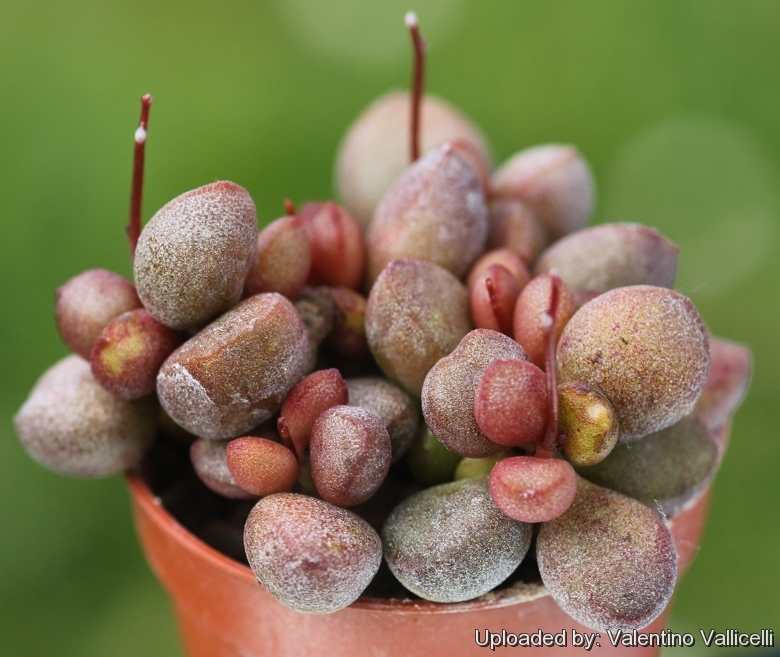 Origin and Habitat: This plant is native to the lower slopes of Namaqualand coastal mountains (15 km on the Nutabuoi, North of Porth Nolloth road,) Northern Cape, South Africa.

Description: 'Little spheroid' is one of the innumerable morphological and geographical variant of the very variable Adromischus marianae. It is a naturally occurring form distinguished by superb and very peculiar round leaves.
Habit: It is a much-branched small perennial leaf succulent, with thick stems, occasionally continued in fat fibrous roots.
Stem: Short, thick ascending often constricted at the base.
Leaves: 2-3 cm long, arranged in a spiral on the main stem, sub-spherical to elliptic, slightly concave above, faintly verrucose or almost smooth, grey-green to greyish brown with a thick bloom. Tip truncate. Base wedge-shaped. Margin at least in places horny.
Inflorescence: Spike-like thyrse with 1-flowered cyme 10-25 cm high, grey-green.
Flowers: Buds terete, slightly grooved. Flowers 1-1,2 cm long pale pink, with 5 petals basally fused to form a greyish-white cylindrical tube gradually tapered towards tip, erect at first, later spreading. Corolla-lobes 2-3 mm long, acute, spreading or recurved, pale pink with purple margins, rough and with club-shaped hairs mainly in throat. Anthers not protruding from corolla tube. 'Little spheroid' produces only a few flower-buds per inflorescence and is the lesser flowered of the 'marianae'.
Seeds: Very small. 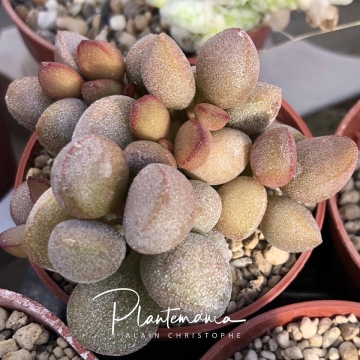 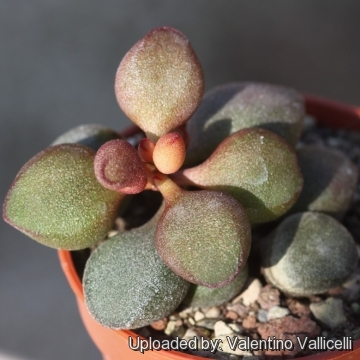 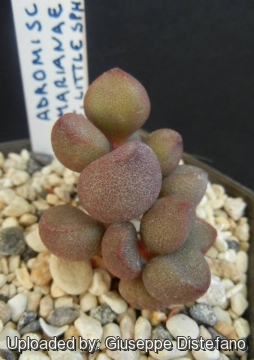 Cultivation and Propagation: Adromischus marianae is a most beautiful succulent but rarely seen in cultivation. It is not the easiest species to cultivate, and highly prone to rotting off, both at the height of winter or summer.
Growth rate: It is a relatively fast growing species.
Soil: Use mineral well-permeable substratum with very little organic matter (peat, humus).
It needs perfect drainage to flourish.
Repotting: Repotting every 2-3 years. As it is especially prone to rot under-pot in a smaller container filled with very porous compost. Use pot with good drainage. All species of this genus are happy in small pots.
Exposure: It grows best in a partially shaded position. It got sunburned if exposed to midday sun.
Hardiness: Require a minimum temperature 5°C (But hardy down to -7°C for short periods), with good drainage and dryness in winter to resist the cold.
Watering: It takes more water than cacti, but let the soil dry between soaking, in the wild, it receives rain mostly in spring and fall. Must have very dry atmosphere. Water less in winter but do not allow it to shrivel.
Pest & disease: It is vulnerable to mealybugs and rarely scale. It is prone to rotting from the tuberous base or from dried inflorescences. If the plants are not watered and “aired” correctly, fungicides won't help all that much.
Maintenance: As the plant matures, the centre becomes bare. When it does, restart it from side cuttings and throw away the central part. Remove flower spikes before winter.
Propagation: Usually propagate from single leaves (leaf cuttings) or stem cuttings seed propagation is rarely used. Leaves easily root and produce new plants. Twist off a leaf and permit it to dry out a couple of days, lay it on the soil and insert the stem end partially into the soil. The original leaf should not be removed until it has dried up. Try to keep the leaf somewhat upright so that the roots are able to grow downward. If grown in a container, bottom watering by immersing the container is recommended.