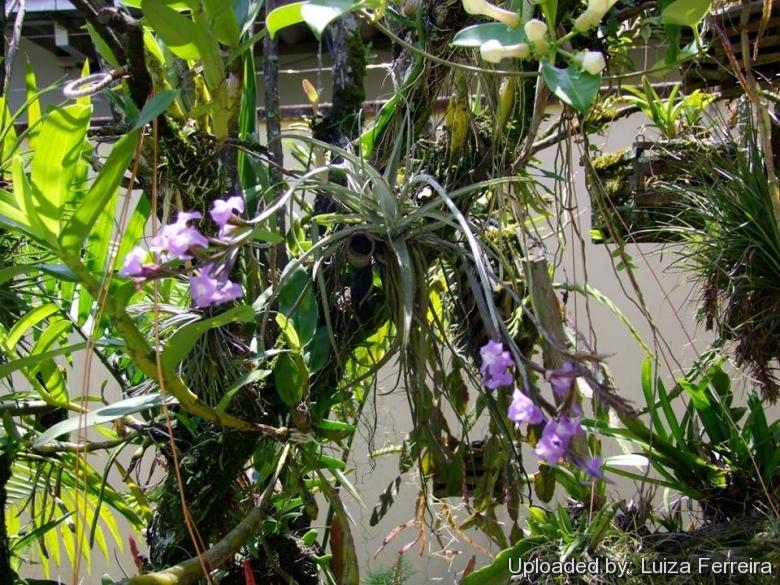 Origin and Habitat: Peru, Bolivia, Paraguay, and Brazil
Altitude range: It is found at elevations of 60-2,300 meters above sea level.
Habitat and ecology: Tillandsia streptocarpa grows as either epiphytically among thorny shrubs in open woods in semi-arid regions or saxicolously in direct sunlight, or root on both trees and rocks at a single location. The appearance of the countryside can be deceiving, however, as it is often a surprisingly humid environment.

Description: Tillandsia streptocarpa, sometimes called the "air plant" is an evergreen, caulescent, perennial plant forming small clumps with silvery leaves arranged into thick rosettes. An average adult is normally 20-30 cm across and mostly to 25 cm tall (occasionally up to 40 cm tall). The flower spike is slender with sweet, fragrant blooms which are very large in relation to the size of the plant, and there are usually several flowers open at the same time along the branched inflorescence. The flowers are distinguished by short stamens and even shorter pistil and by broad showy spreading blueish-violet petal-blades. Tillandsia streptocarpa is a variable species as it is widespread, some forms have very few narrow leaves and others have thick semi succulent leaves.
Derivation of specific name: The species name “streptocarpa”, is derived from the Latin words “strepto” meaning twisted, and “carpa” meaning fruit.
Stem: Stemless or short-caulescent,
Leaves: Linear-triangular and attenuate up to 25 cm long, 15 mm broad, twisted, narrow, deeply channelled, much longer than the stem. New leaves are erect. Mature leaves are spreading and not recurved or more often recurved, and oddly twisted least toward the blade tip. Older leaves may dry into ringlets in order to coil around a twig or tree branch. They are densely covered with spreading, cinereous trichomes. These give the plant its fuzzy white appearance. Sheaths broadly ovate.
Roots: Tillandsia streptocarpa plants, like other airplants, have little or no roots and absorb most or all of the water and food through their leaves. The eventual roots are used by these plants only to attache themselves to rocks or tree hosts.
Inflorescences: Scape is tall and slender, glabrous, its bracts lanceolate, acute, imbricate, striate, densely lepidote. Inflorescence compound or rarely simple, the spikes is bipinnate, that is, the bloom spikes are distichous 5-8-flowered, narrow, the lateral ones arching-decurved. Then on each individual spike the imbricate floral bracts are also distichous. Floral bracts lanceolate, acute, glabrous, shorter than the sepals.
Flowers: Erect pale lavender with white centres. Sepals free, ca.12 mm long, ecarinate, glabrous. The broad flared petals ca. 23 mm long, claw linear, the blade broadly obovate, violet. Stamens deeply included, exceeding the pistil.
Blooming season: They bloom over an extended period mostly in autumn (from March to May in the wild).
Similar species: T. streptocarpa is very like Tillandsia duratii in the young growing stage but it does not grow near as large. An easy way to tell the two apart is that the leaves of Tillandsia streptocarpa are not pendulous (hang down) when they get older. T. streptocarpa grows significantly larger and has softer softer leaves than another species with a morphology similar to Tillandsia reichenbachii. Tillandsia arhiza is also closely related and appears to be a lithophytic derivative of wider-ranging T. streptocarpa, differing from it in aspects of vegetative form and reproduction that again appear to reflect the durability of rock compared with bark.
Fruits (capsules): Cylindric. 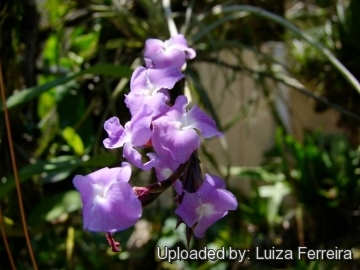 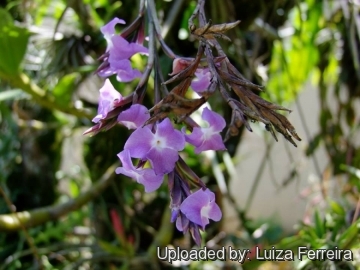 Cultivation and Propagation: Tillandsia streptocarpa produces, when mature, large blueish-violet flowers. This is among the most beautiful of its genus and one that is very easily cultivated. Grow it in a well ventilated place mounted on wood or grown bare root. Makes a very attractive hanging cluster in just a few seasons. They can also be grown on slabs of bark or tree fern fibre. Allow medium to dry out between waterings.
Moisture: From mid spring through fall, mist daily and once a month, mist with 1/4 strength water soluble fertilizer. Keep crown filled with distilled water. If grown outdoors, keep dry during winter.
Exposure: This plant likes bright indirect light and it is best placed in a sheltered spot in the garden during the summer to facilitate flowering. Dappled to Full Sun
Hardiness: USDA Hardiness Zone 9 to 11. These curious plants may be grown outdoors as long as temperatures do not drop below 5° degrees Celsius.
pH Range: 5.5 to 7.5.
Propagation: Division or seed. The primary plant tends to die off after flowering, but will be replaced by the offshoots. Plants can be divided at any time of the year. Seeds are germinated on peat moss. Seeds need light to germinate.