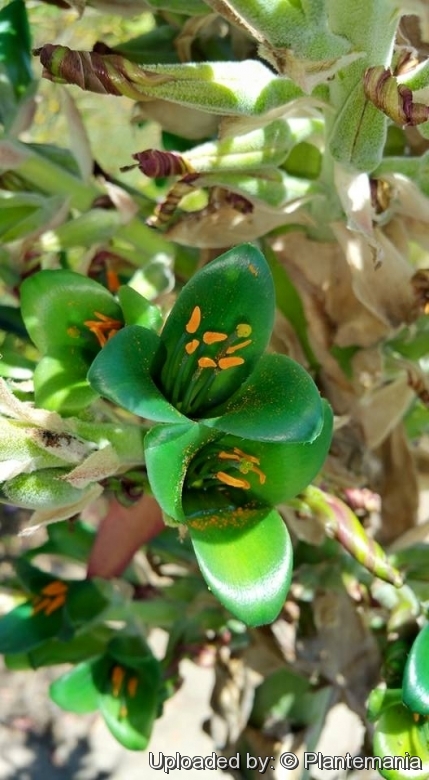 Puya х berteroniana Photo by: © Plantemania
The unusual metallic turquoise flowers are expected to last for around two weeks but it will sadly be the first and last time the plant blooms as they die shortly after the flowers fade. Puya berteroniana is now considered to be a hybrid and the plants occasionally found in cultivation (such as the one above) should be more properly regarded as Puya alpestris subsp. zoellneri.

Origin and Habitat: Mountain ranges of Chile.
Altitude range: 500–2000 metres above sea level.
Habitat and ecology: They are native to the Andes in South America where conditions are very arid and the leaves are covered in a waxy substance to protect them. Established on north-facing rocky exposures, Puya berteroniana–Adesmia arborea communities are the habitat of Trichocereus chiloensis. This species is is the host of the Chagual butterfly (Castnia psittachus Mol.) The largest Chilean butterfly, the larva is fed through the interior of the stems of rosettes, floral scape, etc.. It also hosts of some species of native bees. The spines of the outer two thirds of the leaf are oriented towards the apex (outside of the rosette), so that the herbivores hardly reach the centre where the core is edible. Blooms in spring (from September to November). It will be in flower for a couple of weeks and then hundreds of the seeds will be pollinated by birds, and (only one or two of those will survive.

Description: Puya x berteroniana has a basal rosette of stiff, spiny silvery leaves, from the centre of which a develops a huge asparagus-like flower stalk, bearing hundreds of very unusual metallic, turquoise-blue or blue-black flowers with spectacular orange stamens. It can grow up to 2(-3) metres tall and may last for 100 years before it flowers (usually 6-10). The Puya berteroniana is a monocarpic plant which means it flowers just once and then dies shortly after the flowers fade.
Taxonomy: There is a lot of confusion about the classification of this species. A re-evaluation of the widely applied concept of P. berteroniana led to the conclusion that the type of P. berteroniana is of hybrid origin and is maintained as Puya x berteroniana (Georg Zizka et al. 2013). The name P. berteroniana has been widely misapplied to what in fact is the northern, larger form of the blue flowering Puya alpestris, which is regarded as a new subspecies, Puya alpestris subsp. zoellneri, a member of subgenus Puya. Puya x berteroniana is a very rare and almost unknown hybrid.

Description (based on the type)

Notes: Puya berteroniana presents a strange and extraordinary phenomenon of auto-combustion, which also appears in Puya chilensis, Puya venusta and Puya coerulea, this phenomenon affects older individuals. Zöllner reported to have seen a spontaneous combustion in an individual on Cerro la Campana, on the afternoon of a hot day. 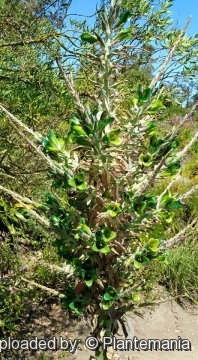 Puya х berteroniana Photo by: © Plantemania
Send a photo of this plant.

Cultivation and Propagation: Puya x berteroniana is a compact and carefree slow growing bromeliad not particularly ornamental most of the year, but exceedingly handsome when in full flower.
Growth rate: Growth is slow and plants may take 20 years or more to flower.
Growing substrate: This bromeliad needs a well drained soil mix comprising equal parts of well rotted compost, coarse river sand (or pumice) and loam and can remain in the same position for many years.
Watering: It enjoys regular moisture during the summer growing period, but reduce watering in winter. It, like all Puyas, it’s very tough and drought tolerant. Requires complete and perfect drainage. Give it excellent drainage.
Feeding: Apply a very weak liquid feed every month or so over the growing season and a mild solutions (one-quartet strength) of foliar fertilizer at 3-month intervals to both garden and container plants. Apply fertilizer to leaves, roots, and reservoir.
Hardiness: USDA Zones: 9-11, Hardy to -6° C. North of Zone 9, this bromeliad is grown in containers that must be overwintered indoors.
Pest & diseases: No serious insect or disease problems. Watch for aphids and scale. Mealybugs infestations are also a frequent problem. Rot may develop if soil is kept too moist.
Tip: Remove dead flower spikes only. Remove older plant crown when it begins to fade. Container grown plants should be re-potted every other year for good growth when new growth starts in the spring, but only need to be divided every seven or eight years when flowering performance starts to diminish.
Use: In warm and temperate climates grow it as a groundcover or accent. in desert or alpine gardens, mixed borders, courtyard gardens, raised beds and rockeries. The plant makes a good potted plant.
Traditional uses: The Chileans like to eat the stalk when it first appears, it resembles a big fat asparagus spear which is sliced and used raw in salads much as palm hearts are eaten. Puya x berteroniana is sometimes cultivated as an ornamental or stove plant in other countries. The soft stem material has been used for corks and bungs and the leaf spines as fish hooks. Fibers from the leaves are used to weave durable fishing-nets. The extract from the long stalk of the inflorescence is used for setting fractures. Nectar of the flowers is applied to an aching ear.
Warnings. The plant is believed to be hazardous to sheep and birds which may become entangled in the spines of the leaves. If the animal dies, the plant may gain nutrients as the animal decomposes nearby, though this has not been confirmed. For this reason, Puya chilensis has earned the nickname "sheep-eating plant".
Propagation: Puya x berteroniana is propagated by division of offsets and from seed. The offsets can be detached and repotted when they have reached the dimension of one third of the mother plant. Be sure to provide high humidity for a month after propagating the offsets. Fresh seed germinates in as little as 14 days from sowing. Remove seeds from inﬂorescence and lay them uncovered on a bed of of pumice grit; keep constantly but moderately moist. Starting from the seed, 6-10 (or more) years are needed for the blossoming, whilst at least 4 years are needed by division.