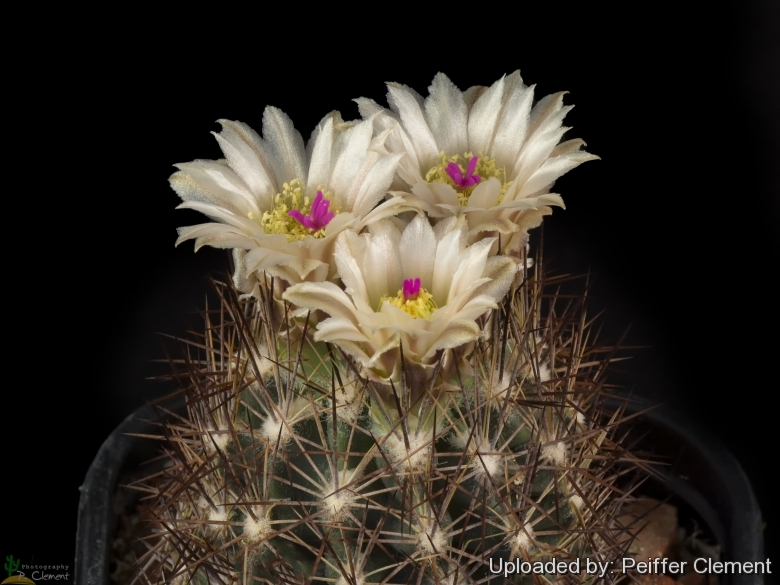 Description: Echinomastus intertextus subs. dasyacanthus is one of the local or morphological form of Echinomastus intertextus identifiable by its shaggy appearance. It is simply a larger form, with relatively long, protruding spine which contrasts with the smooth aspect of typical E. intertextus. These spines obscure the stem giving the plant a pale brownish appearance. Besides this subspecies has much larger flowers and the inner perianth-segments are acute or acuminate. It has also a more northern and eastern range. The flowers, fruits, and seeds of var. dasyacanthus appear to be identical to those of var. intertextus.
Habit: Almost always solitary, although they may occasionally branch once or twice, possibly as the result of injury.
Roots: Diffuse
Stem: Green, globose to ovoid to cylindrical, (7-)10-15(-17) cm or more long when sexually mature and 2-9 cm in diameter. Top of flowering plant and young areoles very woolly.
Ribs: About 13, somewhat spiraled, made up of numerous compressed tubercles.
Areoles: Elliptic to nearly circular with felted areolar groove.
Spines: slender, more or less purplish
Central spines: About 4, slightly thicker than the radials, of which 1 porrect lower central, others spreading, 4-15 mm long, 0,2-0,5 mm thick, grey, or brownish with dull red, reddish, or pink-tinged tips, at first purplish red, passing to bluish grey and contrasts nicely with the paler radial spines. The, reddish inner layers and spine tips may lend whole stems a dull and dark reddish hue, especially when the spines are wet.
Radial spines: 16-24 slightly appressed to spreading, 8-2,4(-3) cm long (longer than those of var. intertextus). Color: As the centrals, but usually whiter. In in juveniles plants the radials are glabrous, somewhat appressed and the, the porrect lower central spine is often absent.
Flowers: As many as 20 simultaneously on the apex of a single stem, blooming in succession, several (up to about six) at a time, broadly funnelform, 2,3-3,0 cm long, 2,5-3 cm in diameter, white , often with pinkish midregions and tinge. Scales and outer perianth-segments red with white margins. Inner perianth-segments white or purplish, about 2,5 cm. long, acute or acuminate; ovary bearing a few ovate scales. Filaments pale green; Anthers cream yellow. Style greenish, stigma-lobes 9, erect, truncate at apex bright red or pink.
Flowering season: Early spring. (in habitat late February through early April) for as many as 30 days. Individual flowers close at night and reopen for 2-3 days.
Fruits: Globose to ovoid fruits, 8-15 mm green but upon ripening may turn tan to dull or pale reddish through-out or at the apex..
Seeds: Glossy black, papillate, nearly spherical to reniform seeds, 1 mm.

Subspecies, varieties, forms and cultivars of plants belonging to the Echinomastus intertextus group 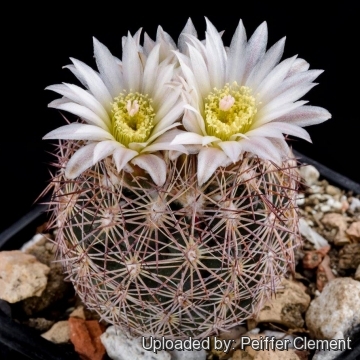 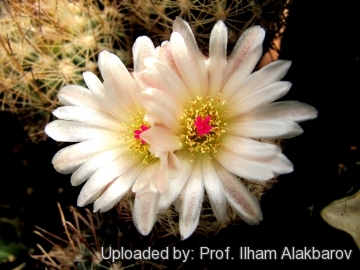 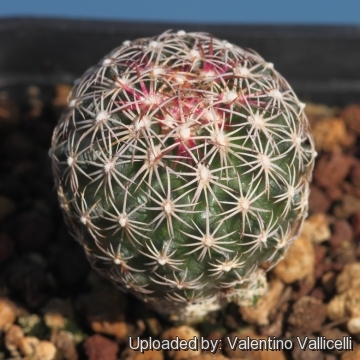 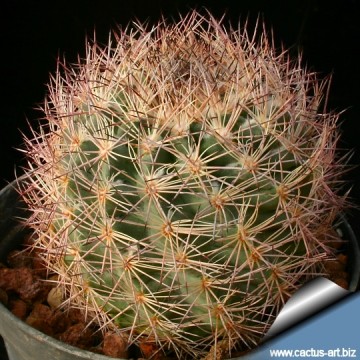 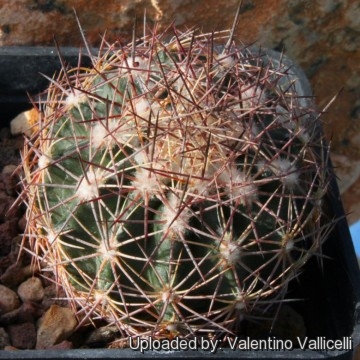 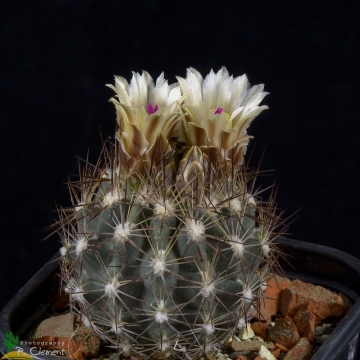 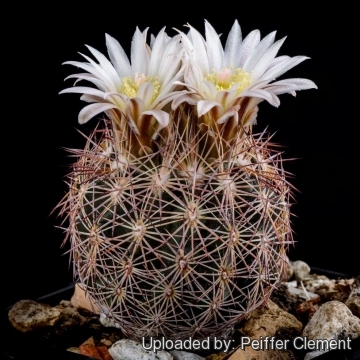 Cultivation and Propagation: Echinomastus dasyacanthus is a most beautiful cactus but rarely seen in cultivation. It is quite difficult to grow on its own roots. Very easily rot! It’s thought that’s better to watch this species in photo or in the natural habitat rather than to try to cultivate it. For this reasons the plant is often grafted on a frost hardy stock.
Soil: Use mineral well-permeable substratum with very little organic matter (peat, humus).
It needs perfect drainage to flourish.
Repotting: Repotting every 2-3 years. As it is especially prone to rot under-pot in a smaller container filled with very porous compost. Use pot with good drainage.
Exposition: This plant need full sun and above all a very good ventilation, especially in winter. Tends to bronze in strong light, which encourages flowering and heavy spine production.
Watering: Water sparingly during the growing season and keep totally dry during winter. In the rest period no high atmospheric humidity!!Care must be taken with watering as they tends to become swollen and untidy in growth habit if given too much water and shade.
Fertilization: During the growing season enrich the soil using a fertilizer rich in potassium and phosphorous, but poor in nitrogen, because this chemical element doesn’t help the development of succulent plants, making them too soft and full of water.
Hardines: It can tolerate temperature below zero (-15° C or less).
Pests & diseases: It may be attractive to a variety of insects to watch for:
- Red spiders: Sensitive to red spider mite. Overhead watering is helpful in controlling mites.
- Mealy bugs: Occasionally mealy bugs they develop aerial into the new growth among the wool with disfiguring results, but the worst types develop underground on the roots and are invisible except by their effects.
- Rot: Rot it is the major threat. If the plants are not watered and “aired” correctly, fungicides won't help all that much. Mature individuals - if the growing conditions are not optimal, easily rot and die.
Remarks: Displaying your cacti on shelves has the added benefit of keeping them off the ground and away from potential rodent or snail damage.
Propagation: Seed or grafting. Seeds germinate in 7-14 days at 21-27° C in spring, remove the glass cover gradually as the plants develops and keep ventilated, no full sun for young plants! The seedlings should not be disturbed until they are well rooted, after which they can be planted separately in small pots. Seeds are relatively difficult to germinate (only a limited percentage of seeds germinate). Grafting is often used to speed growth rate and to create a back-up for plants in collection.