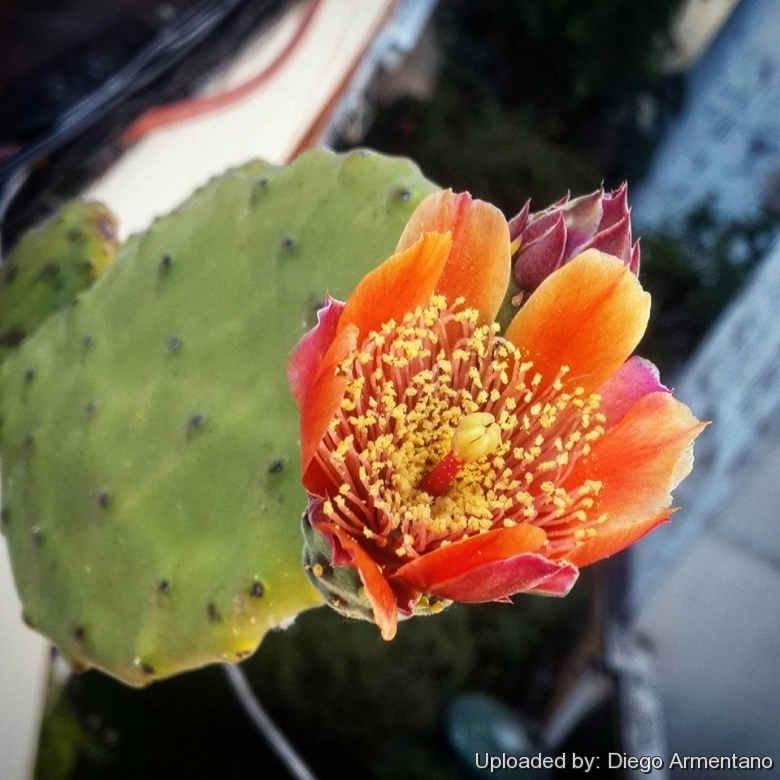 Origin and Habitat: Opuntia tomentosa is endemic to Mexico, where it is widespread in the Mexico Federal District and the states of Aguascalientes, Guanajuato, Guerrero, Hidalgo, México State, Michoacán, Morelos, Nuevo León, Oaxaca, Puebla, Querétaro, San Luis Potosí, Tamaulipas, Tlaxcala, and Veracruz (and Jalisco?) and Guatemala. It is adventive in Australia, South Africa and elsewhere as a minor rangeland pest.
Altitude range: It grows from 1,090 to 2,600 metres above sea level.
Habitat and Ecology: This species is mostly found in sub-tropical, semi-arid and warmer temperate environments. In Mexico it inhabits Quercus forests, xerophyllous scrub and grasslands in a volcanic area on shallow soils, and tolerates disturbance. Climate is semi-arid and modified by altitude, however water availability is highly restricted due to a great percolation caused by the rock structure and to low water retention from the shallow accumulated soil and also a daily wide temperature fluctuation could occur (as wide as ~ 34°C). Seasonal rain distribution, altitude and the rock and soil distribution turn the area into a heterogeneous and discontinuous arid environment. During the dry season extreme temperatures can reach more than 50° C on the soil surface. Blooming starts in April and ends in June. Ripe fruits are found from August to October. In Australia it is a weed of roadsides, railways, pastures, grasslands, open woodlands, rangelands, disturbed sites and waste areas. This species reproduces by stem fragments (i.e. stem segments may become dislodged and produce roots) and also by seeds. Stem fragments are spread by becoming attached to animals, footwear and vehicles. They are also dispersed in dumped garden waste. The fruit are eaten by various small animals (e.g. birds and foxes) and the seeds spread in their droppings. There are no major threats to this species at present. A potential threat to species of the genus Opuntia is the invasion of the cactus moth Cactoblastis cactorum, which can exterminate populations completely.

Description: Opuntia tomentosa is shrubby or tree-like species becoming 3 to 6 meters high,but occasionally reaching up to 8 m in height. It has a broad top a smooth trunk and dull green segments (often incorrectly called leaves) which are velvety to touch due to the dense covering of short fine hairs. The flowers are a deep orange. This species was first described from cultivated plants and has long been a favorite. When grown out of doors it forms a large and conspicuous plant. It is usually nearly or quite spineless, but plants which come from the Valley of Mexico are often spiny.
Derivation of specific name: The denomination "tomentosa" indicates that this species, instead of spines (it often lacks them, especially in larger plants and in the stem, or has them thin and of small size), but has "tomento", very fine hairs on it.
Stem: Main central stem (trunk) woody, 0.7-5 m high and 10 to 30(-40) cm in diameter at its base. Branches divided into oblong to narrowly obovate segments (joints or cladodes) similar to leaves. Segments (10-)15-30(-35) cm long, (6-)8-12(-16) cm wide and 1.5–2 cm thick, fleshy (i.e. succulent) velvety pubescent, green to dark green, shiny, somewhat tuberculate when young. The lower ones becomes lignified with time to form the trunk and branches.
Areoles: The areolas (small protuberances in the stem) are in this species slightly rised (especially in periods of water stress), and are provided with light yellow glochids 1-5 mm long.
Leaves: The opuntias, like most of the cacti, lack proper leaves (they are reduced in this plant to small green conical-cylinder, which then fall away early).
Spines: 0-4. Young plants have 2–4 white or pale yellow spines, 0.5-1.5 cm long, located in the areoles with one spine reaching a length of 2.5 cm. The areoles usually become spineless as the plant matures. Spines are needle-like to weakly awl-like, straight, whitish yellow, and become grey with age. A more spiny variety does exist and has more than 50 spines in each areole on the trunk.
Flowers: Yellowish, orange or red, 4 to 5.5 cm long; Outer segments often with reddish markings. Filaments white or rose-coloured; style dark carmine, longer than the stamens; stigma-lobes 5 or 6, white. Flowers usually arise singly on fleshy bases along the margins of the stem segments or sometimes in the flat part of the younger segments. Flowering occurs mostly during the warmer time of the year in spring and summer.
Fruits: Ovoid, obovoid or globose with their apex depressed (saucer-shaped) with circular lines that meet in the centre and give the fruit a shrivelled appearance, pubescent, spineless, but protected with glochids, 3.5-5.2 cm long, 2.5-4 cm in diameter. At first they are green, then they mature and turn dull purplish-red; they are fleshy, sweetish and edible. Each fruit contain on average 80 (±9) seeds within a reddish pulp.
Seeds: 4 mm broad (weight 0.016±0.001 g )

Cultivation and Propagation: Opuntia tomentosa is used occasionally in gardening, and sometimes on the edge of roads, because of its arboreal size and rapid growth. It is a xerophilous plant (like many other plants in desert areas, it survives very well even though long time of drought). It can be exposed to direct sunlight and it lacks dangerous spines. In gardening it is convenient to remove branches that spread outwards or hang down in order to achieve a more tree-like, balanced and beautiful shape, and for the plant reach more height.
Hardiness: Opuntia tomentosa, especially smaller specimens, can not withstand frost or extreme cold.
Uses: The fruits are used as food. Opuntia tomentosa is still cultivated in Central America to obtain (as with other plants) the insect called cochineal, from which (the females) a dye called carmine can be obtained.