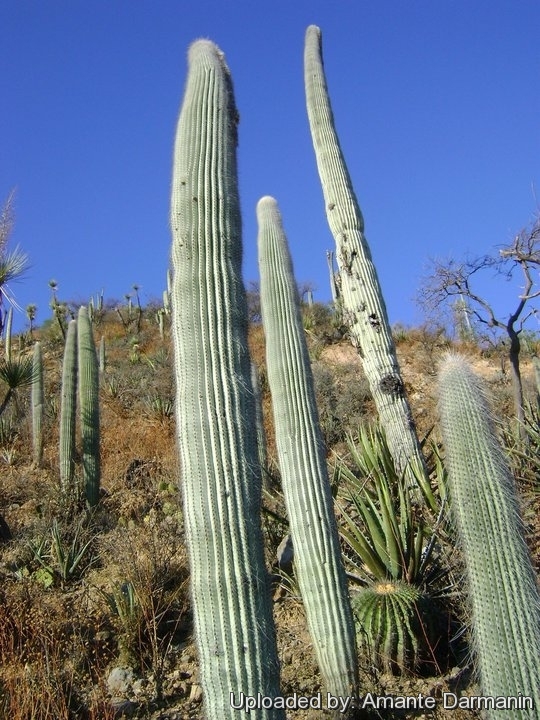 Origin and Habitat: Cephalocereus hoppenstedtii (sym: Cephalocereus columna-trajani) is endemic to the Tehuacán-Cuicatlán-Zapotitlán Valley system and adjacent areas (Mexico). It is the most emblematic species of the Tehuacán-Cuicatlán Biosphere Reserve. Within its range the species is very abundant and the population is stable.
Type locality: Zapotitlan, near Tehuacán, Mexico.Cephalocereus columna-trajani
Altitude range: It occurs at elevations of 600-1,800 m.
Habitat and Ecology: This species occurs in xerophyllous scrub and thorn scrub, it can grow on steep, rocky slopes. Cephalocereus hoppenstedtii is the dominant species of the 'cardonal' vegetation association. This species together with other cacti such as the columnar Neobuxbaumia tetetzo and the small globose, Coryphanta pallida, Mammillaria colina and Mammillaria casoi, is aggregated and associated with perennial nurse shrubs. Some nurse species, Castela tortuosa, Caesalpinia melanadenia and Eupatorium spinosarum have a higher number of cacti beneath their canopies than would be expected by chance. C. hoppenstedtii has been reported to flower and fruit before the rainy season, which occurs July-August, and also to flower from March to September. This species is widely used for support by epiphytes such as bromeliads. Within its restricted range C. hoppenstedtii is abundant and there are no major threats. However, the pollinators (bats) are considered as a malign species in the area and are threatened. This could affect the species reproductive success in the long term. Habitat fragmentation can be a threat to the population in the near.

Description: Cephalocereus hoppenstedtii is the morphological form of Cephalocereus columna-trajani growing at Zapotitlan, but not sufficiently differentiated and considered merely a local variant of the latter (if not the same). It is a tall grey, columnar cactus, said sometimes to reach 10 meters in height, but in cultivation much lower, often bent or clambering, the apex tapering, the whole plant hidden under the numerous spines. In habitat it forms large stands that look like a forest of telegraph poles. This plant is clearly a close relative of Cephalocereus senilis and is likewise attractive even as a seedling.
Stems: Slender, columnar. Cephalocereus hoppenstedtii is unique in having a slight curvature of the stem near the top. The characteristic bending of the stem tips towards the sun may lower heat load and could favour establishment and growth of plants in their natural habitat where a high solar energy input persists throughout the year.
Ribs: Low, close together, 20 or more.
Areoles: Close together.
Radial: Spines 14 to 18, very short, white.
Central spines: 5 to 8, the longest one sometimes 7.5 cm. long, usually reflexed, brownish.
Pseudocephalium: At the top of the plant but to one side (said to be on the north side). Bristles of pseudocephalium little longer than the wool.
Flower: 7.5 cm long, whitish, with rosy tips, bell-shaped.

Cultivation and Propagation: It is easy to grow. Need a fertile, well drained soil mix. Water the plants well and allow them to dry before watering again. This species seems to do better with a little more water than most cacti. During the growing season fertilize them monthly with a balanced fertilizer. It may produces noticeable amounts of growth each year if kept well fed and watered throughout the warmest months, particularly if it has been acclimatised to accept full sun. Once this cactus is established it can easily produce 20 cm of growth every year.
Sun Exposure: Outside full sun, inside needs bright light, and some direct sun.
Winter rest: During winter month, put them in a cool luminous place and encourage them to enter winter dormancy by withholding water and fertiliser over the winter as they will etiolate, or become thin, due to lower levels of light. It is hard as low as 0 °C (or less) but it is best a warm habitat means that a minimum of 10°C should be maintained to avoid marking of the stem.
Pests and disease: They are susceptible to fungal diseases if overwatered, but are not nearly as sensitive as many other cacti, especially in warm weather. If kept damp through cold periods, they will invariably suffer.
Use: The species is used for wood and juveniles as ornamental.
Propagation: Cutting or seeds. The seeds are quite easy to germinate and grow. Their main requirements consist of high humidity levels, free-draining soil mix, and enough water, light, and nutrition.