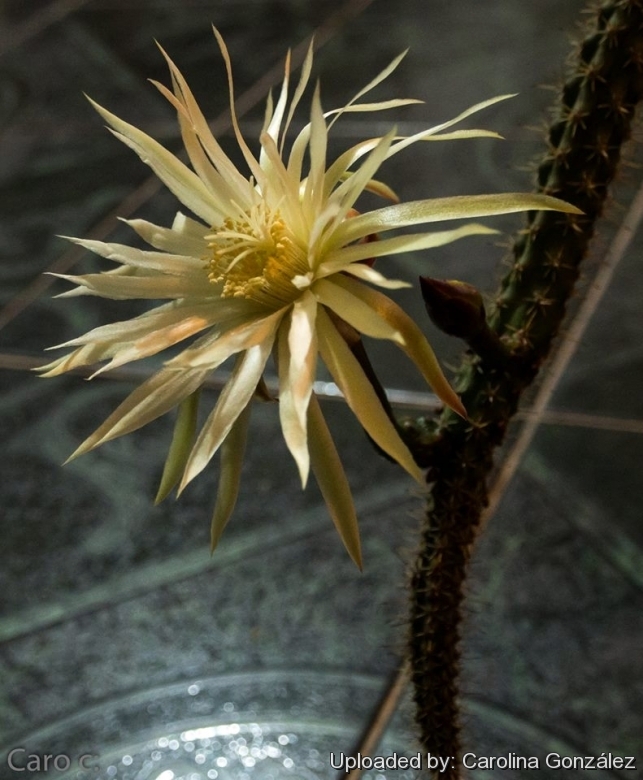 Monvillea cavendishii Photo by: Carolina González
It is a prolific bloomer, putting out its nocturnal white flowers from spring to autumn. The flowers arise from near the top on the sides of the stems.

Description: Monvillea cavendishii is a night-blooming cactus with long, slender, half-erect stems, more or less branched at base often forming thickets. The stems are slender, pale green in colour, and bear fine, short spines. It is generally included within (as a synonym of) Praecereus saxicola |SN|7705]], suggesting that there is not really a fundamental difference between the two, and hard to name accurately without knowing where they come from. This is one of the best flowering cactus species in cultivation. The white flowers open at night and appear more or less abundantly from spring to autumn and are borne toward the top of the stem. The flower-tube is slender, straight without felt or spines and the stamens and style are more or less exserted. The fruit is glabrous, red, plump, spineless. The flesh of the fruit is white, juicy with many small, black seeds.
Derivation of specific name: he generic name of this member of the cactaceae family commemorates William Spencer Cavendish, Duke of Devonshire, who had a magnificent collection of plants at Chatsworth.
Stems: Suberect, arching or clambering, branching at base, pale green to dark green, 2-3 cm in diameter. The fast-growing stems can reach a height of 1-4,5 metres as they ramble on the ground or work their way through tree branches.
Ribs: 7-9(-10), low and rounded.
Areoles: Small, about 5-15 mm apart.
Radial spines: 6-10 short, acicular to bristle-like, yellowish brown.
Central spines: 1-4, up to 2 cm. dark brown or black8 to 12, brown
Flowers: The flowers with slender tube arid broad limb arise from near the top on the sides of the stems. They are 10 to 13 cm long, 6-10 cm in diameter, the tube 5 to 6 cm long. Outer perianth-segments pinkish or greenish. Inner perianth-segments white; ovary small, bearing a few very small scales, these broader than long, with minute brown chartaceous tips, their axils naked.
Fruits: Globular to ellipsoidal, 5-7 cm long, 4-5 cm in diameter, red. Flower-tube rigid after anthesis, withering on the fruit.
For more details see: Praecereus saxicola |SN|7705]]

Subspecies, varieties, forms and cultivars of plants belonging to the Praecereus saxicola group 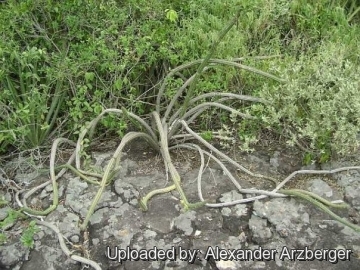 Monvillea cavendishii forms thickets, the spiny stems often high-clambering or drooping, depending on where they grow. Photo by: Alexander Arzberger 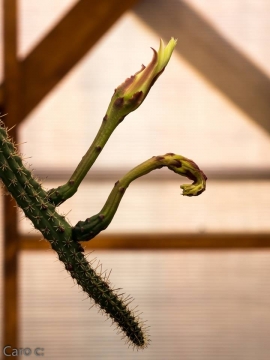 Cultivation and Propagation: Praecereus saxicola is grown as an ornamental because of its beautiful nocturnal flowers. It is a fast growing plant that form thickets, the spiny stems often high-clambering or drooping, depending on where they grow. If you can keep it warm over the winter, then Praecereus saxicola with its lovely flowers appearing during the night, is not as difficult as it is made out to be. It rarely planted outdoors in tropical countries, where climbs trees in a semi-naturalized state. In nature it climbs into trees. Older plants in the greenhouse buds freely.
Soil: It needs a compost containing plenty of humus and sufficient moisture in summer (though quite adaptable) it can be also cultivated on split bark like Monstera or in orchid substrate.
Moisture: The plant is quite resistant to drought condition, but shouldn't dry out totally otherwise it will turn purplish brown and look unpleasant and should be permitted to dry out entirely between watering
Fertilization: Too much fertilizer will cause a lot of lush growth at the expense of flowers.
Hardiness: Should not be kept under 5º C in winter.
Exposition: It perform best if grown in semi–shade but tolerate full sun. Extra light in the early spring will stimulate budding.
Uses: Praecereus saxicola, is often used as stock for grafting.
Propagation: By cuttings rootted in moss as an epiphyte.